THE SNOW is melting now on the highest ski slopes of the High Tatras. In some centres the winter season has just come to an end and the summer season is already beginning. That has been one of the features of the past couple of winters, as the best mountain centres try to shorten the transition period and create resorts with year-round operations. This trend is most visible at centres in Jasná, Donovaly, Vrátna and Vysoké Tatry. 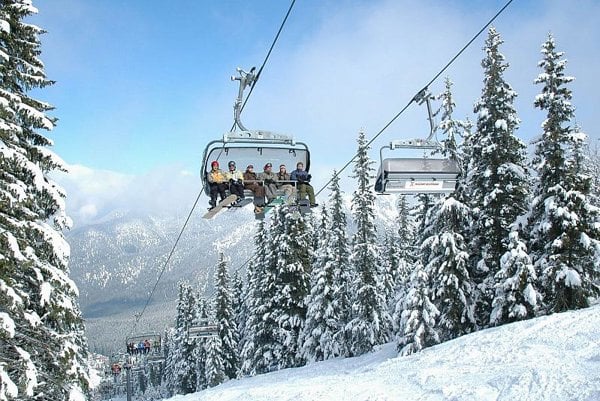 Next season some skiers might forgo the convenience of a chairlift to save money. (Source: RomanMillan)
Font size:A-|A+0

THE SNOW is melting now on the highest ski slopes of the High Tatras. In some centres the winter season has just come to an end and the summer season is already beginning. That has been one of the features of the past couple of winters, as the best mountain centres try to shorten the transition period and create resorts with year-round operations. This trend is most visible at centres in Jasná, Donovaly, Vrátna and Vysoké Tatry.

The climate this winter was moderate and the ski season only started at Christmastime and that was mostly thanks to snow guns and cannons. However, centres at higher elevations – from about 1,200 metres and above – were rejoicing as they had below-freezing temperatures and natural snow before the end of the calendar year. For instance, Jasná reported – unusually – 50 to 150 cm of snow and very good ski conditions during Christmas.

“The height of snow in Lomnické sedlo (1,750 – 2,200 metres above sea level) was one of the highest and the season was one of the longest in history as the centre was open from December 28,” said Katarína Šarafínová, the marketing director of the Jasná ski centre.

Elsewhere, in elevations of about 1,000 metres there was primarily a 30 – 40 cm blanket of man-made snow. The best ski weather came only in March when Slovakia got a good, Alps-like accumulation of snow, building the depth of the snow base to historical records such as the 410 cm recorded in the High Tatras and prolonging the season to the end of March and, at some centres, to mid-April.

However, there were very few stable, sunny days this winter and very often the slopes were covered in clouds; also, there were some days when the mist made skiing impossible.

Ski centre operators had not only to fight this winter’s moderate temperatures but also the impacts of Slovakia’s strong euro currency and the global economic crisis. The operators had to face challenges such as: the introduction of holiday subventions in Poland to support domestic tourism which caused the top resorts in Slovakia to be 50 percent more expensive for Poles than the ones at home; Austria attracting Russian skiers by offering 30 percent discounts; the worsening economic situation in Hungary, a source of many skiers who traditionally like Slovak slopes; and, last but not least, the deteriorating economic circumstances of many Slovak skiers.

The biggest drop in the number of visitors to ski centres in Slovakia was reported in February, which is traditionally the main ski-holiday month.

“December and January went beyond our expectations but on the other hand February and March disappointed us,” Martin Dubecký from the marketing department of the Vrátna Free Time Zone told The Slovak Spectator. “The biggest drop was seen among Polish skiers, mainly at the beginning of February after the Polish zloty weakened significantly. In comparison with our best season in the recent past (2005 – 2006), we noted a 14 percent drop in visitors this year.”

The numbers of visitors in most Slovak ski resorts were padded somewhat by local skiers. But Slovak skiers usually go for day or weekend-trips and they also tend to compare the prices of ski passes in Slovakia with centres in the Alps and some of them preferred one longer skiing trip in the Alps to several short trips to the Slovak mountains.

“Our people skied and then left; they did not eat, they did not drink,” Dubecký said.
According to Miroslav Dobrota from Park Snow Donovaly, their centre had a majority of local visitors and the slopes were not dominated by the Hungarian or Polish languages, but by Slovak.

“This winter has confirmed the trend that Slovak ski centres must focus their activities mainly on shorter stays – weekends and extended weekends which are attractive for regular skiers several times during the season,” Šarafínová from Jasná told The Slovak Spectator.

Veľká Rača, a centre in the north of Slovakia, reported a 40 percent drop in revenues this season.
“In comparison with last year, this season was shorter because it started on December 25 and last year we were already skiing in November,” said Jarmila Hlavová from Snow Paradise Veľká Rača.
The next ski season should be characterised by a fight for every single customer as this could already be seen in the 30 percent discounts offered in the second half of this winter.

Ski resorts will most likely prepare bigger discounts and special service packages for skiers next winter. Park Snow Donovaly is planning to cooperate with other entrepreneurs in the ski centre to create “service packages” – ski passes along with accommodation and catering or ski schools, according to Dobrota.

In any event, the ski centre operators must re-evaluate their prices for the next season. The economic crisis should be culminating in Slovakia and it is very likely that some of the ambitious plans for infrastructure development in some resorts will be suspended. People will compare more closely what they get for their money at each centre. Some of them might return to smaller centres where they will sacrifice a chairlift but save money on the ski pass. Paradoxically, the crisis can help – businesses will need to work together more and this will bring greater benefits for visitors.