THE GLOBAL economic downturn has hit not just product manufacturers, but also the companies which provide them with support services. Freight forwarding companies, operating either by road or rail, have found themselves badly affected by the economic crisis at the same time as they face other challenges, such as competition from abroad and the arrival of Slovakia’s new electronic road toll collection system. 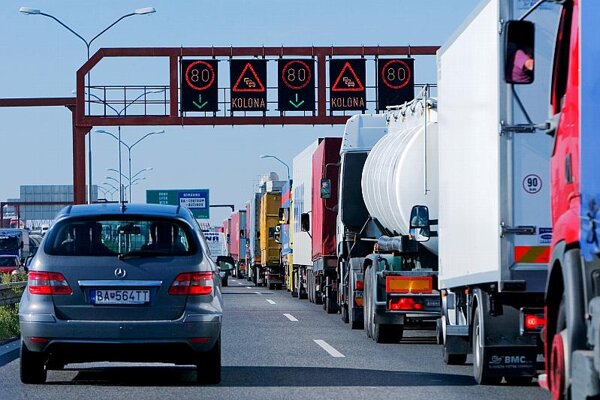 THE GLOBAL economic downturn has hit not just product manufacturers, but also the companies which provide them with support services. Freight forwarding companies, operating either by road or rail, have found themselves badly affected by the economic crisis at the same time as they face other challenges, such as competition from abroad and the arrival of Slovakia’s new electronic road toll collection system.

Road and rail cargo transporters are reporting a drop in their business of one third or more. Operators are responding by reducing costs and making their operations more effective.

“The economic crisis has reduced freight forwarding markets by about 30 to 40 percent,” Pavol Reich, the secretary general of ČESMAD Slovakia, the Association of Slovak Road Transport Operators, told The Slovak Spectator. “Individual road transport operators are responding by reducing costs. They either return trucks, if they are not able to use them in the transport cycle, to leasing companies, or stop using their vehicles. They check them out from registers and thus do not need to pay either road tax or compulsory car liability insurance.”

The crisis has also led to staff cuts, either among drivers or maintenance workers. The crisis has already led to the closure of a number of road transport operators, according to Reich. About 300 hauliers did not renew their licences for international freight transport last year, the Hospodárske Noviny (HN) financial daily wrote in early April. For the time being, about 6,500 companies are active in international road freight forwarding.

“Apart from the crisis itself, Slovak road transport operators also face competition from neighbouring countries, because here some economic conditions for doing business are lighter, for example the tax burden, compared to Slovakia,” said Reich. “This reduces the amount of work for Slovak transporters as it is taken by somebody else, for example transporters from Poland, Hungary, the Czech Republic and Ukraine.”

Reich told HN that this has resulted in a reduction in prices for Slovak transporters of roughly 25 percent.

The global economic crisis has reduced demand for freight transport.

“This reduction is a result of lowered production, particularly in the metallurgical, automotive and construction industries - on the side of input commodities as well as production on the other side,” Margaréta Grecová, spokesperson for ZSSK Cargo Slovakia, the state-owned rail transport company, which recently received a €166 million government loan to compensate for a dramatic drop in its revenues, told The Slovak Spectator. “For ZSSK Cargo this represents a drop in output of 40 percent.”

ZSSK Cargo has responded with changes in investments and cost reductions.

“On the other hand, this situation is a strong incentive to obtain new commodities for rail transport,” said Grecová.

Road toll to push up prices

The electronic road toll collection system means road freight transporters will soon face an increase in costs. From January 1 next year, vehicles over 3.5 tonnes will no longer use windscreen stickers to pay to use highways and first class roads across Slovakia.

Instead, Slovakia will be pioneering a satellite-based toll collection system. The SanToll-Ibertax consortium, which won a major tender to install the network, the country’s first electronic highway toll system, is due to begin operating the system on January 1, 2010.

The toll will range from €0.06 to €0.21 per km depending on the weight of the vehicle, the number of axles and other factors. The new system will cover 1,900 kilometres of roads, the National Highway Company (NDS), which will collect the tolls, states on its website.

“We have to say that the electronic toll collection system will have an impact in the form of increased costs for road transport, i.e. for members of our organisation,” Reich told The Slovak Spectator. “The difference will be very big, particularly in the field of internal road transport because nowadays a transporter pays approximately €1,195 and is able to drive on Slovak roads the whole year.”

Under the new system, a typical haulier will need to pay this sum for one vehicle driving a regular route between Bratislava and Žilina for just one month.

“It is unthinkable that a transport company could absorb these costs as already today most transport operators operate on the brink of economic effectiveness and after absorbing these costs they would certainly go into the red,” said Reich.

While for road freight transporters the new toll system means an increase in costs, ZSSK Cargo sees it as a chance to make conditions across the market for surface transport more balanced.

“However, the launch of the electronic road toll collection system is only a partial step towards equalling conditions for doing business for individual types of transport,” Grecová told The Slovak Spectator. “It is assumed that the introduction of the toll system will increase costs per tonne per kilometre [by road] by approximately 20 percent.”

ZSSK Cargo thinks that harmonisation of conditions for all kinds of transport might bring significant changes in the market.

“Basically we expect that if conditions for doing business for all kinds of transport are not harmonised, road network capacities will be fully utilised while rail capacities will remain unexploited,” said Grecová.

The cargo rail company sees the introduction of the electronic toll system as a chance to move some cargo onto the rails.

When customers decide on a certain kind of transport, this selection process is always influenced by a complex set of criteria, as each has its pros as well as cons.

“Road transport is more flexible, available and faster over short distances when compared to rail,” said Grecová. “But there are also aspects which transporters cannot influence directly.”

One of them is cost. According to a study by the Transport Research Institute in Žilina, conducted for the Transport Ministry in 2005, rail cargo transport is burdened by fees to use the rail infrastructure which are 2.5 times higher than those charged to use the road network, according to Grecová.

“As long as this imbalance is preserved, we cannot always provide competitive services in the market,” Grecová told The Slovak Spectator. “In this area, road transportation has an unambiguous advantage, which is reflected in its pricing policies. While rail transport in fact bears the full costs of its infrastructure, road transporters cover only a part of the costs of the road infrastructure. Implementation of the electronic toll will be only the first step towards harmonising conditions for doing business for inividual kinds of transport.”