THE SPRING of 2009 has been a turbulent one for both Ján Slota and his Slovak National Party (SNS). The party, a junior member of the governing coalition, has seen two of its three ministerial nominees fired; one of its replacement ministers remains under constant media pressure over a dubious tender deal; and in early May, Prime Minister Robert Fico sacked Slota’s nominee as head of the country’s investment development agency, SARIO. 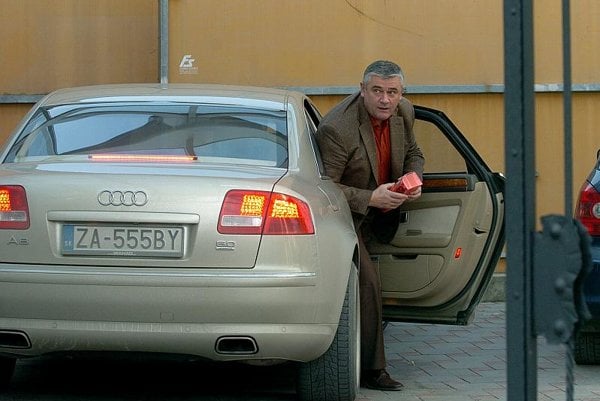 THE SPRING of 2009 has been a turbulent one for both Ján Slota and his Slovak National Party (SNS). The party, a junior member of the governing coalition, has seen two of its three ministerial nominees fired; one of its replacement ministers remains under constant media pressure over a dubious tender deal; and in early May, Prime Minister Robert Fico sacked Slota’s nominee as head of the country’s investment development agency, SARIO.

Ján Slota himself has also been attracting a lot of media attention after the MP was photographed driving around in a Mercedes SLR McLaren 722 Edition, a car which carries a €650,000 price tag. The SNS boss said the car belongs to his son.

Slota has been notably tight-lipped regarding the fall of the SNS ministers or local media reports about his apparent wealth. The SNS said that personnel changes initiated by the prime minister are the result of a massive opposition and media campaign against the party.

Political analysts said they don’t expect a strong reaction from the SNS which might risk the stability of the ruling coalition; nor do they think that recent developments signal the likelihood of early elections.

Political analyst László Öllős suggested that Fico’s move was both a gesture to voters and also a signal to the SNS.

“The message probably was that the SNS should not disturb and weaken the popularity of Smer,” Öllős told The Slovak Spectator, referring to the largest party in the coalition, of which Fico is the chairman.

In April, SNS nominee Marian Janušek was pushed by the prime minister to resign from his post as minister of construction and regional development over a controversial public contract which was dubbed ‘the bulletin-board tender’. It was won by a consortium of firms, two of which are reported to have close links to Slota. The original call for tenders was advertised solely on an internal bulletin board at the ministry in an area not normally accessible to the public, and attracted only one bid.

Ján Chrbet was forced to step down as environment minister earlier this month after questions were raised about his ministry’s sale of the country’s CO2 emission quotas.

On May 7, on Fico’s instructions, Economy Minister Ľubomír Jahnátek sacked another SNS-nominee, Peter Hajaš, from his post as director of Slovakia’s investment development agency, SARIO. The only reason given for the dismissal was that it would make the operation of the institution more effective. Hajaš had served as head of SARIO, the country’s one-stop-shop for foreign investors, since October 2006.

According to the Sme daily, SARIO also ordered legal services from Avocat, one of the companies said to be close to Slota which was involved in the flawed bulletin-board tender.

Juraj Kiesel, who has previously served as head of the foreign missions department as a specialist on the Middle East, will replace Hajaš. Kiesel’s work has also involved handling communication between the business sector and potential trading partners, and preparing trade missions, the SITA newswire wrote.

“I understand it less each day,” was Slota’s immediate response according to the TASR newswire.
Meanwhile, on May 11, Fico said that ruling coalition relations were excellent.

“The coalition is stable,” Fico said, adding that he consulted Slota over all the personnel changes in advance. “If I recall a minister, it does not mean that the ruling coalition has internal problems.”

Though local media speculated about whether these events could lead to early elections, political analysts were quick to calm speculation and dismissed the option as improbable.

“The development that there will not be early elections seems more probable to me than the eventuality that there will be early elections,” sociologist Pavol Haulík told The Slovak Spectator.
“The only one who would welcome early elections from across all the political spectrum is Smer: no one else is interested in early elections,” said Haulík. “This is valid for the coalition partners of Smer because their current status, no matter how submissive towards Fico, suits them much more than the risk that they could be left beyond the opportunities that ruling provides.” Even if the SNS does not face any significant drop in electoral support, it does not enjoy any certainty of returning to government, according to Haulík.

“As for the HZDS, it is far from certain whether it would cross the 5 percent limit to allow it to enter [the next] parliament,” Haulík said.

“The results of the opposition in regular elections [due in 2010] could be better than in early elections,” Haulík said.

As for newly established parties such as Freedom and Solidarity or the Conservative Democrats of Slovakia (KDS), Haulík said that these parties need time to capture the attention of the public. He added that they are counting on upcoming elections to the European Parliament and the associated campaign to raise their profiles.

“But they certainly prefer regular elections over early elections,” Haulík said. “Their chances in early elections would be very feeble while regular elections could benefit them precisely because the ruling parties might lose out because of the crisis and votes need not necessarily go to the parties of the current opposition. Time, in this case, is on their side.”

As for the key issues in the campaign, according to Haulík, these are hard to guess at this point because they will depend on further developments.

“Since there is only one year left until regular elections, early elections would not make much sense,” Haulík said. “One year is plenty of time, considering how the economy might develop and what impact it might have on public opinion.

According to Öllős, the situation is quite unstable and the two junior parties in the ruling coalition in no way wish for early elections. Smer is more likely to favour the option, said Öllős.
“They will somehow have to survive the next year without scandals and if [there are scandals] they will have to accept that strong public pressure will be created – without it Smer would not act – and then their nominee will be sacked,” Öllős said.

Meanwhile, the extent – and possible source – of Slota’s apparent riches has become a favourite subject of speculation in the Slovak media.

After pictures of Slota emerged in the ultra-exclusive Mercedes, Sme reported that Slota’s total cumulative official income since 1990 amounted to Sk14.4 million, or less than €500,000 (at 2009 exchange rates), about Sk5 million short of the car’s list price.

Slota’s assertion that the car belonged to his son prompted Sme to investigate Slota Jr’s business dealings. It concluded that profits from the firm in which he is involved would not be enough to pay for it. Nor did it explain, as also reported in Sme, his father’s concurrent use of a Lexus 600h L, an Audi A8 limousine and a Porsche Cayenne, or his ownership of a Bentley.