IT WAS a beautiful dream – a 27-hole golf course only 20 kilometres from Bratislava offering housing for several thousand people across 232 hectares. A renowned Canadian architect was called in to design the site, which was to cost €200 million to build, and ground was to be broken in 2009. 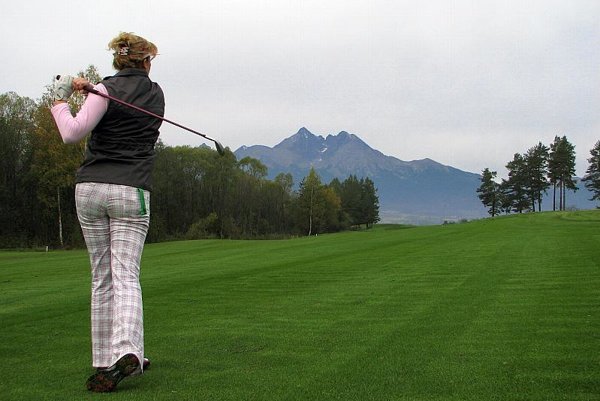 IT WAS a beautiful dream – a 27-hole golf course only 20 kilometres from Bratislava offering housing for several thousand people across 232 hectares. A renowned Canadian architect was called in to design the site, which was to cost €200 million to build, and ground was to be broken in 2009.

But the dreamers – Slovak hockey player Miroslav Šatan and his two financial partners, Miroslav Guman and Libor Červenka – got a rude awakening on March 9 by police from the anti-corruption unit.

SWAT teams raided half a dozen homes and businesses, including the premises of Ciridis, which is handling the Royal Golf Resort project near the village of Veľký Biel, in Senec District.

Guman had left the country shortly before the raid, while the head of the district land office in Senec, Gabriela Mačaiová, was taken into custody for 48 hours.

The police have laid corruption charges and have begun a criminal investigation. The General Prosecutor’s Office is refusing comment, but according to the golf resort’s project manager, Jaroslav Holeša, the police allege that people associated with Ciridis bribed public officials.

“It’s an investigation of corruption, in which they say that unknown individuals representing
Ciridis bribed [officials at] state institutions in order to obtain permits. Naturally, we reject these claims.”

Holeša said the project arose five years ago after Guman told Červenka of a large area of land that could be bought near Senec.

Červenka and his partners in the CI Holding company had recently started playing golf, and realized that Slovakia, then with only three golf courses compared to more than 80 in the neighbouring Czech Republic, presented a market opportunity.

“We have known Miro for 10 years, and on several occasions he mentioned that he would like to invest in Slovakia, but that he didn’t know what to put his money into,” Holeša said. “It’s difficult for them [professional hockey players], because they don’t really understand these matters, but he thought the golf project sounded good. And that’s how he got involved.”

Šatan’s first step was to buy a one-third share in Ciridis for Sk55 million [€1.8 million].

The sale contract was signed in December 2005, only a month after Guman and Červenka had raised the firm’s basic capital from Sk1 to Sk150 million.

The capital increase was unusual, and was to become the source of discord between Šatan on the one hand and his two partners on the other.

Instead of cash, Guman and Červenka deposited in Ciridis a non-monetary asset of questionable value - 10 bonds issued in 1926 by a now-defunct German company named The Silesia Electric Corporation.

The bonds were issued as part of the reparations Weimar Germany was required to make for damages it caused the allies in the First World War, but they are not recognised by the current German government.

A legal analysis of the bonds that Ciridis commissioned cast doubt on their worth, “in view of the time, costs and risks associated with recovering the money.”

Peter Šatan, who represents his brother Miro’s interest in Ciridis, told The Slovak Spectator that they had only recently learned of the details of this transaction, and said the family’s trust in Guman and Červenka had been shaken.

“We have recently learned of such things ourselves. I don’t know what to say, except that we will wait for the results of the police investigation.”

Červenka was out of the country and was unavailable for comment at press time, while an older man answering the doorbell at Guman’s mansion in Miloslavov near Bratislava said the owner was abroad and would be returning in a week. But Holeša denied that the Šatans had been deceived.

“We’ve been hearing rumours that we tried to trick someone out of their money with this non-monetary deposit. It’s not true. Each shareholder put Sk50 million in cash into the basic capital.”

Miroslav Šatan later bought at least Sk56.5 million in promissory notes from Ciridis. His brother said he had put about Sk150 million [€5 million] into the project so far. Holeša said the other investors had put up an equal amount.

Ciridis managed to secure a change in the land use plan in Veľký Biel at the end of 2008, and to get the land rezoned for development on January 29 this year. The company can now apply for a building permit.

Securing these changes was anything but easy. On September 25 last year, eight out of nine local council members in Veľký Biel rejected a memorandum of cooperation with the investor because they wanted Ciridis to invest more in local schools, roads and infrastructure, given that the company would be doubling the size of the village.

After that council meeting, several of the councillors met privately. Councillors Pavol Guláš and Atila Danter told The Slovak Spectator that at this private gathering, two of their colleagues described being approached by a Ciridis representative and being offered bribes of a million crowns each to approve the memorandum. “That’s a lie,” Holeša said.

One of the councillors who reported the alleged bribery attempt, Anton Szigeti, refused to comment. “I don’t have the nerves for this,” he said, and hung up.

The wife of another councillor, Robert Fulop, was allegedly threatened while walking in the village with her baby in a stroller. An unknown man allegedly approached her and asked if the baby was still in good health. Fulop also refused to comment for The Slovak Spectator.

A week later, on October 7, the mayor of the village called an extraordinary council session, at which six councillors were suddenly in favour of the same memorandum they had rejected before. A new land use plan was then put before the council, and was passed with seven votes out of nine.
“How did they get those votes? What do you want me to say?” Guláš said. “I guess they were just clever.”

Holeša said that the police claims of bribery of state officials, including Veľký Biel Mayor Anton Danter and Gabriela Mačaiová of Senec, were unfounded.

“It’s very easy for someone to come forward and tell the police that these people got this and that approval for this large project, and therefore they must have given bribes. But if we’re talking about Ms. Mačaiová, do you think, if she had taken a bribe, they would have released her after 48 hours without charging her?”

Mačaiová did not answer her telephone, while Danter refused to comment. “Not until this is all over. In the meantime, ask Ciridis.”

Holeša said that the Royal Golf project had not been abandoned, but he admitted it was in trouble, due not only to the economic crisis but also to the police investigation. “Our priority now is to clear the name of this project and get rid of these charges, because they aren’t doing us any good at all.”