AFTER Robert Fico’s cabinet took power in 2006, it promised to join Slovakia’s rich west to its less fortunate east with a highway by 2010. Its ambition was to build more than 150 kilometres of highways, by making use of public-private partnership (PPP) projects. It is now apparent that this ambitious goal will not be met as the global financial and economic downturn has led to a series of project postponements. 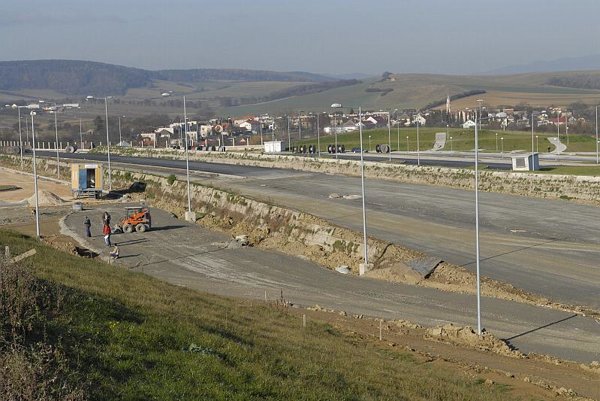 AFTER Robert Fico’s cabinet took power in 2006, it promised to join Slovakia’s rich west to its less fortunate east with a highway by 2010. Its ambition was to build more than 150 kilometres of highways, by making use of public-private partnership (PPP) projects. It is now apparent that this ambitious goal will not be met as the global financial and economic downturn has led to a series of project postponements.

The delays to the PPP projects represent a worrying signal for both the eastern part of the country, which is pinning its hopes for greater development on completion of the highway link, and for the construction sector, which had hoped that more intensive road building might help fill the gaps which have opened in company budgets as a result of lower private investment in construction.
At a cabinet session on May 13, Transport Minister Ľubomír Vážny announced finance-related delays to the first package of PPP projects.

The cabinet approved the appendix to the agreement, which is with a consortium led by the French company Bouygues Travaux Publics, to design, build, finance, and operate stretches totalling 75 kilometres of the D1 highway between Žilina and Prešov. Construction of the highway stretches will start only after the financial close.

The ministry had already admitted problems obtaining financing for the PPP projects at its Info Day on April 27. According to Vážny, commercial banks are not willing to lend such large amounts as they were before the crisis. Francois Tcheng, representative of the consortium, which also includes Slovak firms Doprastav Bratislava and Váhostav-Sk Žilina, expressed hopes at the Info Day that they would find a solution for overcoming the crisis and reach the financial close.

The ministry signed the concession contract with representatives of the consortium led by Bouygues Travaux Public on April 15.

The 30-year contract is to project-manage, build, fund, operate and maintain five sections of the D1 highway, also known as the northern connection, between Bratislava and Košice, from Dubná Skala to Turany, Turany to Hubová, Hubová to Ivachnová, Jánovce to Jablonov, and Fričovce to Svinia. The consortium submitted a bid of about €3.3 billion, with €1.63 billion, excluding VAT, accounting for construction works, according to SITA.

One bidder for third PPP package

On May 13, Minister Vážny also announced that only one bid had been received for the third PPP project package. The deadline for submitting bids to design, build, fund, operate, and maintain 29 km of the most technically-demanding sections of the D1 highway between Žilina and Martin was May 11.

According to the minister, it may take the commission responsible for evaluating bids two to three weeks to do so.

Vážny refused to reveal the identity of the bidder. But according to TASR, it may have a consortium consisting of Hochtief PPP Solution GmbH, Alpine Bau GmbH, FCC Constructión S.A. and Western Carpathians Motorway Investors Company GmbH.

“For the time being the evaluation process is proceeding,” Vážny said, as cited by TASR. “There was only one submitted bid, but the tender is valid. The public procurement law does not exclude the submission and evaluation of only one bid.”

It is planned that most of the missing highway stretches on the route from Bratislava to Košice via the northern connection will be built via PPP projects.

The Slovak government selected the PPP approach as the most suitable way to complete the country’s highway network. It avoids the deficit in public funds which would otherwise be needed for highway construction and spreads state expenditures for construction and operation of highways over 30 years, according to the Construction Ministry. It also transfers responsibility for financing, constructing, operating and maintaining the highway from the state to the consortium.

So far Slovakia has launched PPP projects to construct a total of over 150 kilometres of highways and dual-carriageways, divided into three packages. The Construction Ministry has already signed two concession agreements with consortiums selected during tenders. But the crisis has complicated access to funds.

“The timetable was set so,” said Vážny as cited by SITA. “I’m still sure that it would have been feasible if the crisis and complications during the financial close had not occurred. The original timetable, accepted also by the applicants, was that along with the concession agreement, they will submit also the financial close.”

On the basis of negotiations with banks Vážny assumes the financial close for the second package, for construction of sections of the R1 dual-carriageway, might be signed in June.

It is that PPP project which has so far made most progress. Minister Vážny signed a concession contract with Fadi Selwan, president of Vinci, one of the companies forming the consortium which won the tender – to construct 51.6 kilometres of the R1 dual-carriage way between Nitra and Banská Bystrica – on March 23, after about two months’ delay.

Under this contract, the consortium, comprising Vinci Concessions and ABN AMRO Highway, will prepare documentation and build stretches of the R1 between Nitra and Selenec, from Selenec to Beladice, from Beladice to Tekovské Nemce, and a northern bypass of Banská Bystrica.

The consortium won the tender with a bid of €1.5 billion. This sum includes direct costs linked to construction and costs linked to the operation and maintenance of the dual carriageway during the 30-year concession. The state should pay the consortium a total of €3.465 billion for constructing and maintaining the road during this period, according to the ČTK newswire.

At the ministry Info Day, Selwan cited problems caused by the crisis in securing financing for the project. Originally, the consortium had negotiated with three banks, but was now talking to 17.

According to Selwan this has made it difficult to reach financial close. He said banks can now provide much less funding than before the crisis and thus a higher number of banks have to be involved.