BUILDING in Slovakia requires stamina: not only for the work itself, but also – and sometimes mainly – for the paperwork and permits one needs, regardless of whether the final building is a huge shopping centre on the outskirts of the capital or a small family house in a village in central Slovakia. To ease the pain associated with all the paperwork required from construction companies and builders, the Construction Ministry has proposed a new law and has received a lot of criticism for it – mainly from municipalities. 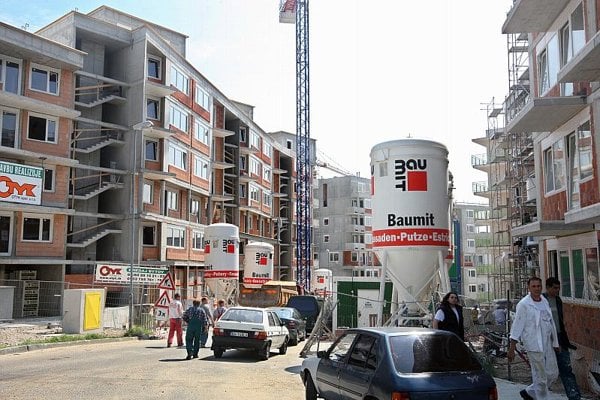 Work in progress: but the paperwork involved can be just as intensive. (Source: Sme – Pavol Funtál)
Font size:A-|A+  Comments disabled

BUILDING in Slovakia requires stamina: not only for the work itself, but also – and sometimes mainly – for the paperwork and permits one needs, regardless of whether the final building is a huge shopping centre on the outskirts of the capital or a small family house in a village in central Slovakia. To ease the pain associated with all the paperwork required from construction companies and builders, the Construction Ministry has proposed a new law and has received a lot of criticism for it – mainly from municipalities.

The cabinet approved the proposed Act on Territorial Planning and Construction, simply known as the construction bill, as it was proposed by the Construction Ministry on March 18, 2009. If parliament approves the current wording of the bill it will become valid beginning July 2010 and will replace the current Construction Act which dates back to 1976.

The new construction bill includes several basic changes aimed at rationalising state regulatory controls that apply to construction and making them more effective, especially by simplifying the administrative process of granting permissions, Linda Vaškovičová from the Communication Department of the Construction Ministry told The Slovak Spectator. To simplify the process, granting construction permission will become part of the territorial planning process. Vaškovičová said the location of various buildings should already be covered by the respective zones within the master plan or by a territorial permit. The bill would require all municipalities with more than 1,000 inhabitants to have a master plan and at the same time would shorten the process of territorial documentation processing, she said.

“Generally speaking, the better-prepared the master plan of the municipality is, the faster and easier the permission processes can be,” Peter Kováčik from the Association of Construction Entrepreneurs of Slovakia (ZSPS) told The Slovak Spectator. For that reason, he sees the obligation for municipalities to have a master plan as a positive aspect in the proposed construction bill. According to Kováčik, the proposed categorisation of buildings should make the granting of a permit easier.

The new categorisation of buildings is one of the main points of criticism of the construction bill expressed by the Slovak Association of Towns and Villages (ZMOS). According to ZMOS spokesperson Helena Poláková, the currently-used system is comprehensible but will be replaced by a less comprehensible and ambiguous one which will cause problems for the local construction offices as well as to the project engineers and builders.

“The ambiguity of some regulations could eventually prolong the whole process,” Poláková told The Slovak Spectator.

ZSPS also has some concerns about the current text of the bill.

“We expected the new construction bill to pay much more attention to the legal relations among the triangle of the main stakeholders in construction: the investor, the project engineer and the constructor of the building,” Kováčik said, adding that ZSPS, together with the Slovak Chamber of Construction Engineers and the Slovak Chamber of Architects, proposed certain regulations in this area for incorporation into the new law, but the ministry did so only partially and the bill, as it is currently worded, again deals primarily with the relations between a construction office and the investor.

“We believe that more space in the law for the decisive participants in construction would help them all in practice,” Kováčik told The Slovak Spectator.

Construction auditor is a novelty

The most discussed regulation proposed by the bill is introduction of the concept of a construction auditor. According to Vaškovičová, it is inspired by German, British and Czech construction law.

Under the bill, the auditor is a natural person registered in a list of construction auditors who is entitled to handle the administrative and technical operations in the permit-granting process. The person should act as an additional control body in order to simplify the process for the local construction office.

ZSPS sees having such an auditor as a positive but Kováčik stressed that the ministry will need to make sure that the auditors are well-prepared professionally. The auditors will work on the basis of their own trade licence and contract with the construction investor or the construction offices and for that reason Kováčik does not expect it to be a very popular job, at least in the first years of implementation of the new construction bill.

“On the other hand, having this institution will offer a certain group of investors the possibility to assure obtaining the construction permit or the final inspection fast, well and with a guarantee, as the auditors will have to be insured for any damage they might cause with their actions,” Kováčik told The Slovak Spectator.

Having construction auditors engenders less enthusiasm among representatives of the villages and towns who act as the local construction offices. ZMOS sees such auditors as foreign and redundant.

According to ZMOS, the ministry did not provide any concrete facts or figures to justify the introduction of the concept of construction auditor. Poláková said the construction bill is fully functional and effective without the auditors.

The proposed construction bill would also significantly increase fines for illegal construction activity, with four categories of fines and the highest reaching €165,000.

“The increased fines will achieve some improvement; however, in our conditions it would perhaps be more effective to have construction police,” Kováčik told The Slovak Spectator. “But that goes beyond the construction law as we understand it here.”