THE EUROPEAN elections are approaching and, despite their varying or in some cases even non-existent election programmes, all the political parties running candidates in the elections claim to have one thing in common. They want to persuade as many voters as possible to cast their ballots, in an attempt to erase the poor image which Slovakia earned five years ago by recording the lowest turnout in any EU member state. 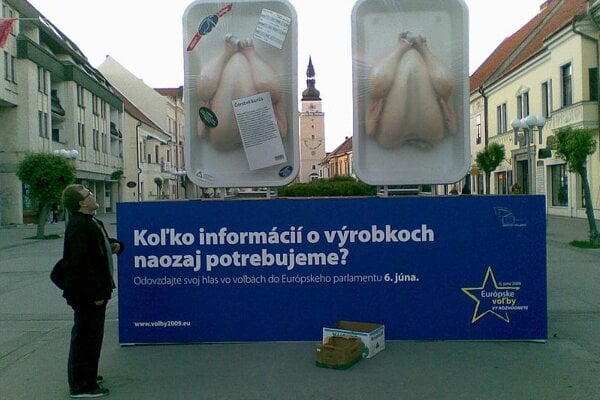 THE EUROPEAN elections are approaching and, despite their varying or in some cases even non-existent election programmes, all the political parties running candidates in the elections claim to have one thing in common. They want to persuade as many voters as possible to cast their ballots, in an attempt to erase the poor image which Slovakia earned five years ago by recording the lowest turnout in any EU member state.

Political parties started their official campaigns for the forthcoming elections to the European Parliament (EP) on May 16. Even before that, the EP information office in Slovakia started a media blitz to alert Slovaks to the elections, which will take place on June 6.

The campaign’s central theme was to show people that voting for candidates in the European elections represents a choice between different political approaches to everyday issues. The main topics chosen by the EP office in Slovakia for the campaign were energy resources, consumer protection, safety and European budgetary expenses. Apart from the usual billboards, leaflets or posters, three 3D displays were erected in the centres of Bratislava, Banská Bystrica and Trnava.

“According to the number of reactions we keep receiving I can say that the information campaign to the European elections 2009 has attracted the attention of Slovak citizens,” Robert Hajšel, the director of the EP information office in Bratislava, told The Slovak Spectator. He believes people are spending more time discussing the direction of European integration.

“Of course not everyone likes the TV spots or the big 3D installations, but these media have aroused great interest and I believe that this interest by citizens in European topics will show in their decision to take part in the European elections,” Hajšel said. If people see that the EP ensures cheaper roaming phone calls within Europe or more transparent prices for airline tickets, they will also be more interested in those who will represent them in the EP, said Hajšel, who believes that the campaign should provide the necessary information and thus increase turnout.

However, advertising experts have not shown much enthusiasm for the campaign.

“Unfortunately, I would evaluate this year’s campaign about the European elections as below standard,” Juraj Vaculík, the owner of one of the top Slovak advertising agencies, Vaculik Advertising, told The Slovak Spectator. “It’s uninteresting, not very striking, easy to miss and mainly not engaging at all.” In particular the print formats and out-of-home formats, such as billboards and city lights, are not very well done, according to Vaculík.

Juraj Alner, the secretary general of the non-governmental Pan-European Union in Slovakia doesn’t believe in the power of the campaign.

“People don’t make decisions according to what they see on TV in the course of 10 days,” Alner told The Slovak Spectator. “What influences the public’s opinion is the long-term systematic political work rather than a campaign lasting a few days.” Apart from that, he also regards the billboards paid for by the EP to motivate the voters as being confusing rather than motivating.

Slovaks don’t feel like EU citizens and they also lack information about what it actually means to be an EU citizen, according to Alner. He said there are no political debates about the European politics of Slovakia, how Slovaks contribute to the European agenda or how that agenda affects the country.

“Political parties are doing the opposite of real European politics,” Alner told The Slovak Spectator. On the one hand, the problem lies in the media not giving enough space to real European topics. On the other hand it’s the fault of some political parties that seem to send to Brussels only the people they don’t need at home and that creates the impression that they have to protect the interests of Slovakia in the EU.

“That’s a mistake, a counterproductive statement, which shows a very anti-European attitude,” Alner said. “Unfortunately, we can see it on the billboards of many political parties.”

According to Alner, opinion polls which ask what the EP should most urgently address return answers like employment, job opportunities or social policies.

“Simply, the topics that are closest to the people and that the EP actually really deals with – only people are not aware of that,” Alner said, adding that during his debates with Slovaks the most frequent question is ‘How should I know whom to vote for when I have no idea what they do there?’.

“This question is addressed to the media, because they don’t give enough space to European topics, and to the political parties, who underestimate the work of their own deputies in the EP,” said Alner. Politicians and the media should realise that European politics is not foreign politics for us, but is part of Slovakia’s domestic politics.

According to Alner, there has already been some change in this respect in the past five years, but not enough to influence the result of the upcoming European elections.

“But maybe a bad result in these elections will motivate those who are responsible for these issues,” Alner said.