Quotas contract published - minus the fig

THE NEWLY-APPOINTED Environment Minister, Viliam Turský, has published the text of the contract through which Slovakia sold its excess emissions quotas to Interblue Group, a company registered in the US, but it shows neither the amount of quotas sold nor the price at which they were purchased. 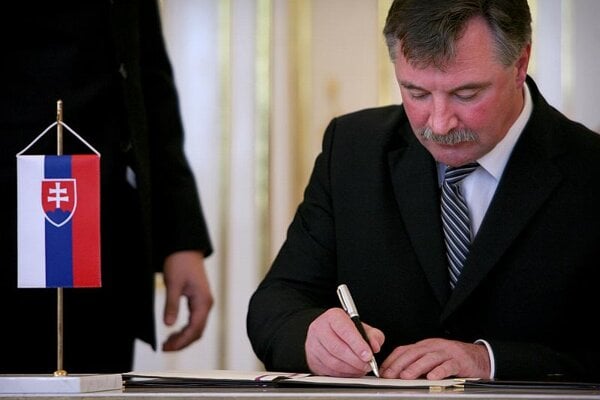 THE NEWLY-APPOINTED Environment Minister, Viliam Turský, has published the text of the contract through which Slovakia sold its excess emissions quotas to Interblue Group, a company registered in the US, but it shows neither the amount of quotas sold nor the price at which they were purchased.

Turský was appointed to his post by President Ivan Gašparovič on May 20, having previously served as the State Secretary of Slovakia's Agriculture Ministry since mid-2006. He replaced Ján Chrbet who was forced to resign in early May when he refused to publish the emissions quotas sales contract. After his appointment, Turský said that he would publish those parts of the sales contract that are not trade secrets, as earlier requested by the Prime Minister, TASR wrote.

“The ministry has been trying to keep the contract with Interblue Group secret for several months now and I consider the publishing of the contract without the essential information as a mocking of citizens and the rule of law,” Rasťo Diovčoš from the Fair-Play Alliance said.

According to Diovčoš, the Ministry has no legal basis for not publishing parts of the contract. The censored data do not possess the character of a trade secret, Diovčoš said, because under the Freedom of Information Act, protection of trade secrets is not violated when the information deals with environmental pollution or is related to the use of state or municipal funds.

“The behaviour of the ministry only poses more question marks about the effective management of the state,” Diovčoš told The Slovak Spectator.

Earlier on May 19 Fico announced that he will not demand an annulment of the sales contract, saying that nobody provided him with any relevant information or evidence confirming that in 2008, when Slovakia signed the deal with Interblue Group, any other country sold its CO2 emission quotas under more favourable terms than Slovakia did, the SITA newswire reported.

The €70 million Slovakia received from the sale will be used for thermal insulation of family houses and apartments through loans from the State Housing Development Fund (ŠFRB), SITA wrote.

Parliamentary deputy Pavol Frešo of the Slovak Democratic and Christian Union (SDKÚ), who has been the main critic of the emissions sale, says he is upset that Fico has been hampering efforts to clarify the contract between the Environment Ministry and Interblue Group, SITA wrote on May 18.
Fico has no right to issue any ultimatum to the opposition about proof, Frešo said.

“He should read the constitution and he will find that the one who has to prove to all of Slovakia that the sale was favourable for the country is the prime minister himself,” SITA quoted Frešo as saying.

According to Frešo, the opposition cannot compare prices at which other countries sold their excess emission quotas since the opposition deputies have been unable to see the contract and the basis on which Slovakia sold its emission quotas. The government’s hesitation in making the contract public and the appointment of the new minister were designed to divert attention and to sweep the case under the rug, Frešo said.

Frešo also claims that the sale of the quotas contradicted a government directive dated February 26, 2008, which specified to whom emissions quotas could be sold. He further stated that bidders who wanted to preserve transparency over cash flow from the emissions quotas sale were expelled from the tender.

According to Frešo, Fico should allow another parliamentary inquiry to be conducted at the Environment Ministry. He warned that if Fico continues to tolerate thwarting of such an inquiry, he will initiate deputy inquiries by other parliamentary committees of additional ministry institutions, for example, Slovakia’s Envirofond, SITA reported.

Frešo was referring to a previous deputies’ inquiry at the Environment Ministry on May 7, just after Ján Chrbet’s dismissal as Environment Minister, when none of the ministry’s state secretaries or Education Minister Ján Mikolaj, who is temporarily overseeing the ministry, met the opposition deputies. At that inquiry the deputies only learned that the “ex-minister took all the documents related to the sale with him that,” the Sme daily quoted Frešo as saying, thereby thwarting the inquiry.

“I deem the fact that the lawmakers’ probe was thwarted as evidence that parliament is losing control over the executive, at least in the area of the environment,” said Frešo, as quoted by TASR.

New head for at roubled resort

Representatives of several NGOs and the Green Party are saying that environmental protection is in a bleak condition in Slovakia.

He listed lack of ideas by management, no long-term vision, zero professional competencies in some fields caused by departure of qualified employees, and political interventions as among the major problems at the ministry.

“The management and the functioning of the Environment Ministry cannot be only about money and political power games,” Rizman said, adding that if politicians do not realise the importance of environmental protection, Slovakia will suffer the consequences for many years after. According to Rizman, in this situation the ministry needs a top person with experience and expertise in environmental protection.

“Turský is not an environmentalist; the coming weeks and months will show whether he will be a good minister,” Rizman said.