Tulips and bicycles in Slovakia

A WEEK-LONG celebration of Dutch culture entitled re: Made in Holland, organised by the Royal Netherlands Embassy in Bratislava, took place between May 16 and May 23. Its main aim was to present Dutch values including sustainability, energy, design, creativity and corporate responsibility. 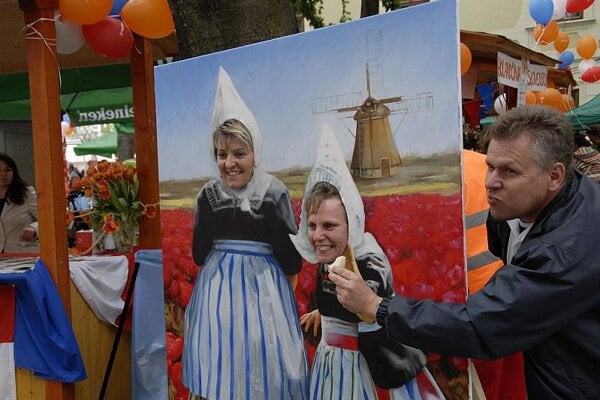 Having fun at one of the Dutch stalls. (Source: Jana Liptáková)
Font size:A-|A+  Comments disabled

A WEEK-LONG celebration of Dutch culture entitled re: Made in Holland, organised by the Royal Netherlands Embassy in Bratislava, took place between May 16 and May 23. Its main aim was to present Dutch values including sustainability, energy, design, creativity and corporate responsibility.

The organisers managed to squeeze a wide variety of events into the week. The programme was launched on May 16 by the Bicycle Ride for Dr. Klaun, an unconventional charity event prepared in cooperation with the Pontis Foundation. The 12 kilometre-long route ended at Františkánske Square, where a Dutch Market took place throughout the same day – stalls offered traditional products from Holland, including tulips, cheeses, books, and typical Dutch sweets, such as the famous stroopwafels. At the market, visitors also got a chance to talk to students of Dutch language and culture, obtain information about the country, and taste Dutch beer and salted herrings.

Cultural events such as readings, film screenings and discussions took place as well, and those for whom culinary experience is the best way to get to know a foreign culture had the chance to taste traditional Dutch meals in an Old Town restaurant.

One of the highlights of the cultural programme was the NL Architects Modernice! exhibition in the Slovak National Gallery, which will continue until June 21. An extensive selection of works produced over the last two decades is now on display in the modern extension of the gallery’s historical building. NL said that exhibiting in this huge space felt like coming ‘home’. The lengthy exhibition space is split into two sections creating two ‘parallel universes’, one dark and one light. As such, the exposition is said to address the dilemma of many museums today: to become a Black Box or to remain a White Cube?

Within the week of Dutch culture, the Nederlands Dans Theater performed in the Slovak National Theatre for the second time and 900 spectators saw its newest production, which included a new piece, Offspring, by Slovak choreographer Lukáš Timulák, which was specially scheduled for the Bratislava performance.