THERE is perhaps no way to adequately describe the Bowed Piano Ensemble experience – you have to be there to believe what you’re hearing, and seeing – 10 people gathered around a grand piano literally pulling sounds from it by bowing and plucking the strings from inside its belly, producing ethereal sounds as rich and complex as a symphonic orchestra. 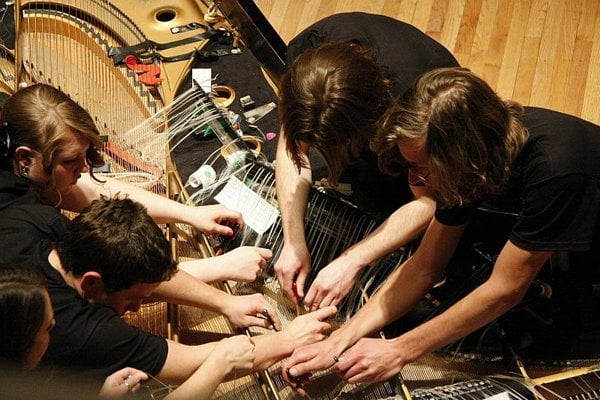 Both ethereal sounds and choreography are part of the show. (Source: Courtesy of Bowed Piano Ensemble)
Font size:A-|A+  Comments disabled

THERE is perhaps no way to adequately describe the Bowed Piano Ensemble experience – you have to be there to believe what you’re hearing, and seeing – 10 people gathered around a grand piano literally pulling sounds from it by bowing and plucking the strings from inside its belly, producing ethereal sounds as rich and complex as a symphonic orchestra.

The renowned American ensemble, organised in 1977 by composer Stephen Scott, makes its debut performance in Slovakia on June 1 as part of its current European tour, which also makes stops in Belgium, Italy, Lithuania and Germany. The group is making its eighth European tour since 1986 and has performed in Germany, the Czech Republic, Bulgaria, Estonia, the Canary Islands, Australia, and other locales around the world, where they typically play to sold-out halls.

Scott, a professor of music at the Colorado College in Colorado Springs, where the group is based, also performs with the ensemble he founded to showcase his own compositions of new music for acoustic piano and 10 players. Scott’s compositions all require bowing the piano strings using nylon filament, a technique invented by composer Curtis Curtis-Smith. In the ensuing thirty-two years of the ensemble's existence, Scott has added a repertoire of other techniques including bowing the strings with horsehair glued to small sticks of wood.

“Around 1970 I was interested in making some kind of communal ensemble with players on different notes with like timbres and colours that hadn’t been heard before,” Scott said in an interview from the United States. “I was studying percussion in Ghana, where I met [American composer] Steve Reich, whose music I already liked and learned more about it from him. Then I heard the sound of a single note played on a piano by rubbing the string with fishing line, and I was hooked.”

The group has released five albums of Scott’s atmospheric music, beginning with 1984’s New Music for Bowed Piano, followed by Minerva’s Web/The Tears of Niobe (1990), Vikings of the Sunrise (1996), Paisajes Audibles/Sounding Landscapes (2004) and The Deep Spaces (2005). It is a modest but respectable oeuvre considering that most of Scott‘s compositions are symphonic length, routinely lasting an hour or more, and are years in the making from composition to performance.

Scott uses a specially designed scoring system that identifies each player by number and assigns a colour to each note in the musical scale. Players routinely move around, inside and occasionally under the piano during performances, creating a highly choreographed dance that is visually stunning to watch.

“We learn the music from scores, but there’s no room for a score or even part in the piano where we might be able to see it,” said Scott, “and we move around to different points of the piano, so we always perform from memory, which involves, besides the music, a kind of choreography which must also be memorised.”

College student make up the ensemble, which means recruiting and training new members each year as students graduate and move on. Despite the challenge, Scott prefers using student performers rather than trained professionals.

"Students are open-minded and more willing to try new things, learn new techniques and performance philosophies,” he said. “They’re generally more available and willing to do lots of rehearsal, which is a requirement in this complex medium. And, of course, they’re cheaper. I probably couldn’t afford to tour as we do with paid performers; nobody in the group is paid, including me.”

Scott’s musical interests are diverse, including jazz improvisers such as Miles Davis, Gil Evans and John Coltrane as well as experimental composers Terry Riley, John Cage and Henry Cowell. Some of Scott’s most recent music has incorporated vocals and text since his wife Victoria Hansen, a lyric soprano, joined the ensemble, appearing on the group’s last two albums. Writing for the voice, he said, has broadened his musical palette. The fantasy song-cycle The Deep Spaces, included in European programme, incorporates the poetry of William Wordsworth, Mary Shelly, Lord Byron, and Pablo Medina. Also on the programme is New York Drones, a 2006 work dedicated to Steve Reich, and the world premiere of the tone poem Aurora Ficta (2008).

After three decades of full-time teaching and serving as the ensemble’s sole composer, tour organiser and road manager, Scott does not appear to contemplate retiring from an endeavor he obviously enjoys and approaches with a youthful passion.

"As I get older the touring is more challenging, especially as I do most of the planning and organising,” he said, “but I still love to compose and play the music as a member of the ensemble, so I don’t see myself stopping anytime soon.”

The concert, hosted by Slovak Radio and the US Embassy, is being organised by Michal Murín, himself a legendary figure in Slovak music. Murín has worked across performance, new media, conceptual and sound art for more than two decades and is currently head of the Digital Media studio in the Faculty of Fine Arts, Academy of Arts in Banská Bystrica. He is also founder of the music festival Platforma DigiVAF(ex).

Stephen Scott and the Bowed Piano Ensemble perform at 19:00 on Monday June 1 at the Slovak Radio, Mýtna 1, Bratislava. Admission is free, but seating is limited.