THE ECONOMIC downturn has tuned market watchers’ ears to pessimistic news. Though a decline in Slovakia’s economy in 2009 had been widely expected, the steep fall in GDP for the first three months of the year came across even gloomier than market watchers had expected. 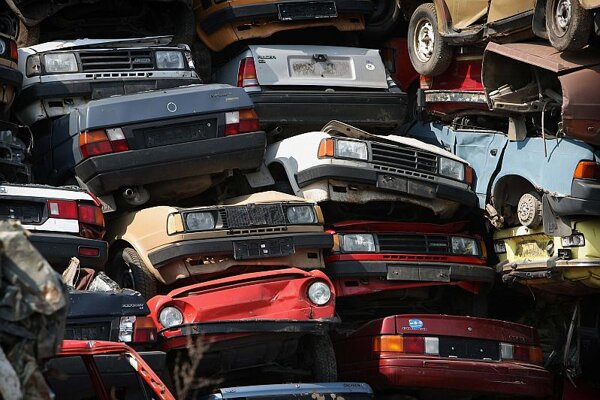 THE ECONOMIC downturn has tuned market watchers’ ears to pessimistic news. Though a decline in Slovakia’s economy in 2009 had been widely expected, the steep fall in GDP for the first three months of the year came across even gloomier than market watchers had expected.

While economists say that the results for Q1 might be the worst of the freefall in the country’s economy and that declining numbers might soften during upcoming months, the country’s economic outlook is not likely to have been better in April or even to improve in May.

Total employment in the first quarter of 2009 fell by 0.4 percent year-on-year with 2,199,900 persons employed. After adjusting for seasonal influences, the Statistics Office said employment was estimated to be 2,227,000, retaining the same level as last year.

However she said that the year-on-year drop in GDP in Q1 was greater than she had expected.

Eva Sárazová, an analyst with Poštová Banka, who had expected the economy to sink by 5.7 percent, told The Slovak Spectator that the significant contraction in foreign trade, weaker investments and also lower domestic consumption stand behind the Q1 fall.

The gas crisis which affected Slovakia for several weeks in January also added to the fall of the economy to a certain degree, she added.

According to Sárazová, the only moderate increase was recorded in the area of public administration consumption.

“The drop in industrial production, revenues and exports, fewer investments, a lower demand for goods and services and also shopping tourism by Slovaks were why analysts did not have reason to be more optimistic,” Sárazová told The Slovak Spectator.

A huge pre-stocking of cigarettes last year, prior to an increase in the excise tax, also contributed to lower GDP in the beginning of this year; however, even after removing this effect, the drop was still significant, according to Valachyová.

“For Slovakia, which is a strongly export-oriented economy, it is important to follow the economic developments of its largest trading partners as well,” Sárazová said.

Of these major partners, Germany’s economy contracted by 6.9 percent while the Czech economy fell 3.4 percent, she noted.

Even though Poland has not yet published its flash estimate, Valachyová assumes that it will show better performance than Slovakia or the Czech Republic since its economy is neither as open nor as dependent on foreign demand as its two neighbours.

The Czech Republic posted somewhat better economic results than Slovakia, though the monthly statistics were not unlike those of Slovakia’s economy, she added.

“The euro could have played a role because, after the currencies of the surrounding countries weakened, it made cross-border shopping more advantageous and thus domestic consumption here could have been worse than in the Czech Republic,” Valachyová told The Slovak Spectator. “This fact, however, can only explain part of the difference between the 3.4 percent GDP drop in the Czech Republic and the 5.4 percent drop in Slovakia.”

Hungary’s economy has sunk deeper than Slovakia’s with a GDP fall of 6.4 percent, but the country has more fundamental problems than Slovakia, she said, thus a fall of around 6 percent had been expected.

Has the bottom been hit?

In its revised GDP estimate released on April 7, the National Bank of Slovakia said that Slovakia’s economy would contract by 2.4 percent over the course of 2009. Its estimate at the end of 2008 had projected growth of 2.1 percent for all of 2009. The bank attributes its 4.5 percentage-point revision entirely to the global economic downturn.

The Slovak economy’s steep drop in Q1 should be the most significant one of the year, market watchers say.

“In the next two quarters we expect milder drops while in the last quarter of 2009 we even foresee slight growth, at 0.2 percent,” Sárazová said. “For all of 2009, we expect the Slovak economy to have contracted by 2.7 percent.”

However, Sárazová does not rule out the possibility that, under the influence of additional negative news, her bank would re-evaluate upcoming quarters, and even the annual GDP estimate, with further downward revisions.

As to whether the country’s economy has reached bottom, Valachyová said that the first quarter has, obviously, been the worst for central Europe.

“Indicators for the United States and Western Europe are gradually improving, even though they show only very feeble improvement,” Valachyová said. “In terms of quarter-on-quarter, the Slovak economy does not have to necessarily sink further.”

Market watchers do not see much of an impact appearing in the first quarter from the anti-crisis measures adopted by the government.

“Many of these became effective only during the first quarter,” said Sárazová. “Slovakia is a small, open and export-oriented economy and thus the fall in the economy is first of all influenced by the crisis in foreign demand.”

The car-scrapping bonus is worth mentioning, Sárazová said, since its first stage in March has bought some results.

Revenues of Slovakia’s car retailers in March increased by more than 45 percent when compared to February 2009, she said. However, this stimulus was not enough to permit retailers to reach the same revenue level as in March 2008.

“The scrapping bonus is expected to have a similar effect in April and to a certain degree also in May,” Sárazová said.

However, there is a big question mark about what will happen to the demand for cars once the effect of the car scrapping bonus is over, she added.

“During the car-scrapping months, some people who were planning to buy a new car later have now bought their car,” said Sárazová, also adding that “the car scrapping bonus in western Europe helped to soften the year-on-year drop of car production in Slovakia.”