Tea in a spiral of crates

THERE are many ways to incorporate art into architecture. Architecture students in their fourth year of studies at the Slovak University of Technology in Bratislava showed their vision in the foyer of the Faculty of Architecture in mid-May. Under the leadership of Bohuš Kubinský, a sculptor and teacher of a class called Piece of Art in Architecture, the students built a functioning tea house. 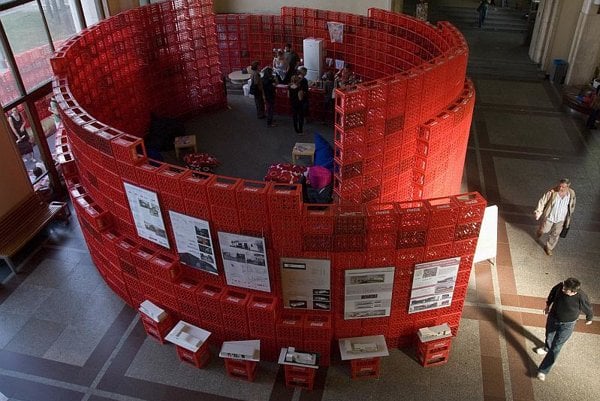 THERE are many ways to incorporate art into architecture. Architecture students in their fourth year of studies at the Slovak University of Technology in Bratislava showed their vision in the foyer of the Faculty of Architecture in mid-May. Under the leadership of Bohuš Kubinský, a sculptor and teacher of a class called Piece of Art in Architecture, the students built a functioning tea house.

The temporary tea house, in the shape of a spiral built from red plastic crates, provided students and teachers an interesting refuge for nips of refreshing tea as well as an intimate atmosphere for discussion between May 11 and May 20.

“The tea house was the final work of students attending my lectures,” Kubinský told The Slovak Spectator. The class consisted of 20 Slovak and four foreign students within the Erasmus programme.
Tea in Crate was in some way linked to the previous year's project, Welcome to the Living Room, which was the highlight of the Ecoliving display.

Last year, Kubinský's students built from 35 tonnes of straw a giant living room in the foyer to point out that these days, people are living fast lives in metropolises completely cut off from nature, unable to see or touch real materials like straw.

Similarly, the Tea in Crate project provided a contrast to the consumerism which is the key feature of the present.

Rather than dedicating his lectures to academic discussions about the place of art in architecture, Kubinský leads his students to create something with a tangible and functional outcome. This enables the students to try out the whole creative process – from the very beginning of an idea up to its realisation.

“During the process of creation they have to think over, for example, the proportions of their work, so that it is neither too big nor too small for the given space, and they also need to follow all the norms,” said Kubinský, adding that for the tea house the students needed to apply hygienic norms, secure potable water and negotiate the whole project with the school.

“Because the students wanted to have water pipes there as well, a non-smoking area had to be divided from the smoking area, too. As a result, the wall of the spiral-shaped tea house stretched outside of the building,” Kubinský noted.

The actual design of the tea house resulted from the students’ democratic discussions followed by voting on individual ideas during the lectures. This resulted in the final spiral shape of the tea house as well as the construction material – red plastic Coca-Cola crates.

“I see the influence of American sculptor Richard Serra, who created spirals from sheets, and in Andy Warhol and his Pop art in the artistic aspect,” said Kubinský.

Kubinský views the Tea in Crate project as a two-level experiment.

“First, it was a visual experiment and secondly it was a social experiment,” he said. “We didn't know whether the design ideas of the tea house would work out properly and we didn’t know whether we could manage to create an intimate atmosphere where people would like to come.”

The fact that the tea house’s existence was prolonged from five to 10 days is proof that the students’ concepts worked.