THE CURRENT economic downturn more or less directly affects all facets of society in Slovakia. Corporate social responsibility (CSR) is no exception, meaning companies face a challenge in finding new ways to meet their goals in this area. The crisis has made companies more cost-sensitive and is now being seen as a test of whether they are sincere about their commitment to behave in a socially responsible way. 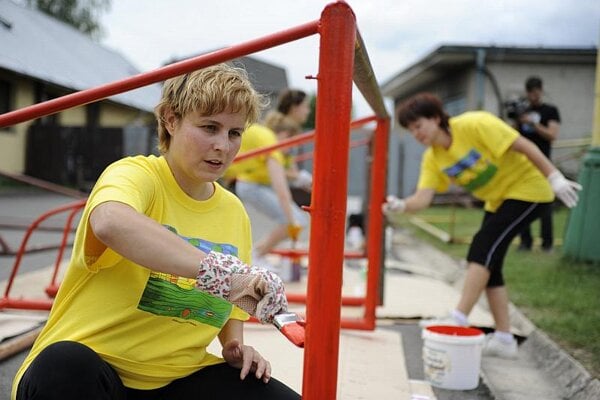 THE CURRENT economic downturn more or less directly affects all facets of society in Slovakia. Corporate social responsibility (CSR) is no exception, meaning companies face a challenge in finding new ways to meet their goals in this area. The crisis has made companies more cost-sensitive and is now being seen as a test of whether they are sincere about their commitment to behave in a socially responsible way.

The crisis has forced companies to search for new ways to keep their existing CSR projects going and make them more effective. They are also choosing new projects more carefully and searching for ways to support them in non-financial ways.

“At the beginning of 2009 some companies cut more or less of their budgets for corporate engagement in society,” Katarína Podracká, the project manager of the Slovak Donors’ Forum, an association of donor leaders in Slovakia, told The Slovak Spectator.

According to her, it is necessary to understand the decisions of shareholders and top managers to freeze or cut corporate engagement budgets, as these depend on the financial performance of the companies, most of which have already felt the negative impacts of the crisis or are expecting them by the end of 2009 and in 2010.

“The positive news is that in spite of the negative economic situation, companies are trying to maintain continuity in corporate engagement projects,” said Podracká. “But they will, more than in the past, put stress on the selection of projects and partners from the non-profit sector as well as on the efficiency and impacts of the funds provided.“

Eduard Marček from Panet (Partners for Networking), an NGO, expects the crisis to push to the fore non-financial support, for example greater employee volunteering or free provision of services by companies or their experience and time for projects and organisations which provide public benefit.
Pavol Hrica, programme director for the Pontis Foundation, agrees that the crisis is boosting the employee-volunteering trend.

“Under the influence of the crisis, firms are thinking more about the money they donate to the community, its effective usage and the multiplication of its final impact,” Hrica told The Slovak Spectator. “The company balances lower financial donations with the engagement of its people for a good cause, and donates its time. Simultaneously, through this it supports the good mood, high morale and building of constructive relations in the team, which in times of crisis, when employees face rather bad news, is very important.”

A survey, which the Pontis Foundation conducted among members of the Business Leaders’ Forum in March confirmed that companies would put stress on the efficiency of their programmes.

“Among their priorities there will also be, in the social area, activities related to employees and strengthening their loyalty,” Jana Ružická, the coordinator of the Business Leaders Forum told The Slovak Spectator. “In the environmental area there will be programmes and measures for saving energy and other resources.”

But, according to Ružická, the situation has changed since the times when companies saw increased costs as the biggest barrier to implementation of CSR programmes.

“Companies are more aware of the ‘business case’ for corporate responsibility,” said Ružická. “They understand it as a long-distance race. They see at its end clearer benefits in the form of strengthened customer and employee loyalty, and cost savings. Thus the economic crisis will not halt companies; they will be more careful, effective, and innovative.”

Podracká expects a change in which support for projects involving social assistance, support for seriously physically challenged people and those suffering from long-term diseases will become a priority for companies. On the other hand, support for projects focused on sports, culture and the arts, as well as sponsorship of entertainment events, will be lower.

The crisis has already cut support for some non-profit organisations and reduced their activities. The Pontis Foundation will not this year hold its Fair of NGOs or host the Pontis Arena during Slovakia’s biggest open-air music festival, Pohoda.

“We are feeling the lower budgets of companies, in particular in the case of projects which have not yet developed a long-term tradition,” Lenka Surotchak, the Pontis Foundation’s director, told The Slovak Spectator.

The Bratislava Community Foundation has also been affected by companies’ changed economic situation.

“Direct financial contributions from companies are something of a rarity at the moment,” said Barbora Paulenová from the Bratislava Community Foundation. “They continue to use the scheme allowing a 2-percent allocation from income taxes as a means to positively and responsibly influence the community and quality of life in it.”

According to Paulenová, the foundation is managing to maintain its existing activities and projects via long-term partnerships with donors.

“I think that this is a ‘test’ period during which companies which implement CSR in their activities are undergoing a trial of whether they take this attitude seriously,” Marček told The Slovak Spectator. “And they will tend to orient towards innovative attitudes and new initiatives, which do not cost any money directly, but instead ask for non-financial inputs. Some companies may regard corporate social responsibility as a luxury, which they cannot afford any more and will restrict them. But some will start orienting themselves in a new direction, which may also strengthen their position during these difficult times.”

The Pontis Foundation regards CSR as an undoubted necessity, since companies cannot afford to engage in irresponsible or unethical conduct.

“The consequences may mean greater risk for companies and may have a bigger negative impact,” Beata Hlavčáková, from the Pontis Foundation, told The Slovak Spectator.

Podracká, of the Slovak Donors’ Forum, thinks that the current unfavourable economic situation gives companies an opportunity to show that their engagement in society is a permanent feature of their corporate culture and is therefore universally valid, in good times as well as bad.

During the crisis, it will help to keep and strengthen good relations with the local community, employees and customers, according to Paulenová of the Bratislava Community Foundation. “A company, through its CSR programme, can become a positive example for other companies or the competition,”

she said. "It is simple to terminate CSR activities due to the current situation, but the crisis also challenges companies to think out and create forms of CSR which will not burden budgets, but whose impacts will be real and tangible.”