Playing with the stereotypes

WINDMILLS, tulips, bicycles and clogs, but also liberalism, multiculturalism and soft drugs. These are the characteristics which leap most frequently to mind when people speak about the Netherlands. To show that the Netherlands is much more, and to break down these stereotypes, the Dutch Embassy in Bratislava has organised an extensive festival introducing the country as an innovative, environmentally-friendly and charitable place. Two exhibitions held as part of the Re: Made in Holland festival remain on display in Bratislava until June 21. 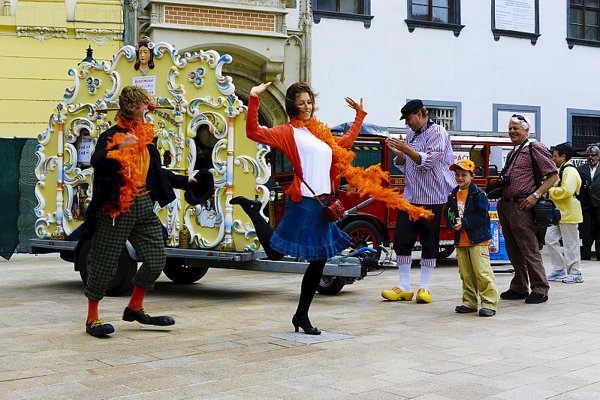 WINDMILLS, tulips, bicycles and clogs, but also liberalism, multiculturalism and soft drugs. These are the characteristics which leap most frequently to mind when people speak about the Netherlands. To show that the Netherlands is much more, and to break down these stereotypes, the Dutch Embassy in Bratislava has organised an extensive festival introducing the country as an innovative, environmentally-friendly and charitable place. Two exhibitions held as part of the Re: Made in Holland festival remain on display in Bratislava until June 21.

“The Dutch Embassy organises a lot of cultural and social events and we wanted to cluster and highlight them,” Illah van Oijen from the press and culture department at the Dutch Embassy told The Slovak Spectator.

“The Netherlands are not only tulips, windmills and bicycles. We wanted to break down these stereotypes and show what the Netherlands really means to its people,” she said.

The festival started in grand style on Saturday, May 16, with a Dutch market in Bratislava’s Old Town.

This gave locals a special opportunity to get more information about – and a taste of – this low-lying country. Visitors could try traditional wooden clogs or taste herrings, Dutch cheese and sweets.

The market also served as a meeting point for Dutch people living in Slovakia.

On the same day the On a Dutch Wave programme took place, which, as well as readings and films, included a discussion entitled Clichés about the Netherlands.

The festival marathon continued on May 18 with a lecture by architect Kamiel Klaasse, one of the founding members of the respected architectonic studio NL Architects. It preceded the opening of an exhibition presenting 20 years of work by this innovative studio.

Through its name, Modernice! – a play on the words modern and nice – NL Architects expressed their admiration for the local architecture of the sixties and seventies, which is now endangered.

The exhibition is being held in the modern part of the Slovak National Gallery, which has been closed for many years, awaiting reconstruction.

While its so-called bridging, designed by Vladimír Dedeček, is viewed as controversial in Slovakia, for NL Architects it was the main motivation which drew them to Bratislava. Their enthusiasm resulted in its opening for the exhibition, which they designed especially for the space.

“This building is a little bit of an internet love affair for us,” said Klaasse, explaining they had not visited it in person before the exhibition.

NL Architects used the opportunity offered to them and prepared for the bridge – whose interior light is astounding and the brutal sculptural quality of whose façade is frightening, they write on their website – an exhibition divided into three parts: The Remix, Parking! and Program the Program. On 50 posters, in videos and via a model the architects present their earlier as well as current works, of which some have remained only on paper, others are already completed and scattered around the globe, and some of which are under construction.

The exhibition re:Cycle celebrated the phenomenon of the Dutch bicycle. Those who visited it in the Design Factory between May 23 and June 2 witnessed Dutch design and the freshest bike technologies. It showed in what a range of varieties the two wheels of a bike can be put together and that a chain may not always be an essential component. A part of the exhibition showed that ‘bike waste’ can be recycled into useful products: for example, fashionable accessories made from tyres.

And on May 21 an exhibition by a representative of New Realism, Mark Brusse, curated by his long-time friend Alex Mlynarčík, opened. After closing at the Bratislava City Gallery on June 21, it will move to the Považská Galéria in Žilina in July and August.

After last year’s triumphant performance by the Netherlands Dans Theater II (NDT II), this prominent ensemble returned to Bratislava and performed three choreographies – Offspring, Subject to Change and Gods and Dogs – in front of a sold-out audience on May 20. Offspring is the first work of choreography by Slovak dancer Lukáš Timulák, who has been a member of the NDT II for eight years.

Along with showing the Netherlands to Slovaks, the goal of the festival is to inspire cooperation between Dutch and Slovak people. In fact, many of the exhibitions and events of the festival already contained an intertwined Dutch-Slovak element, according to Jana Kadlecová from the press and culture department at the Dutch Embassy.

“This was the case of the dance group, in which the current director of the Ballet of the Slovak National Theatre, Mário Radačovský, used to dance; he is also a personal friend of the group’s choreographer, Jiří Kylián,” said Kadlecová.

The re:Cycle exhibition also presented ideas from Slovak designers. And Mark Brusse exhibited in Slovakia 40 years ago, at which time he became acquainted with Alex Mlynarčík, according to Kadlecová.

“[The festival] has proved that Slovaks are very interested in Dutch culture,” said van Oijen to The Slovak Spectator. “This was the first time our embassy organised such a festival. We have laid the basis now and it has the potential to grow and evolve. There are a few activities that will definitely enjoy a follow-up. Certainly we would like the Dutch market to become a traditional annual event.”

The list of cultural and social events organised by the Dutch Embassy is long and rich. Now the embassy is preparing the Dutch contribution to Sculpture and Object. In the 14th year of this open-air exhibition in the streets of Bratislava, the Netherlands will be represented by Roland de Jong Orlando, Andre van Lier, Cyril Lixenberg, and Jan Maarten Voskuil.

“We will also support the gay- and lesbian-themed film festival Inakosť (Otherness) and will continue with our artist in residence project,” said van Oijen.

“This will be a kind of relay race,” said van Oijen. “The idea is to make a chain both of eyes looking at each other and of visiting countries. Again, not just to bring a Dutch photographer here but also to see what happens. We think that the artist in residence programme has a lot of potential here. That way you can create new work, very contemporary and make people get to know each other and work together and help friendships evolve. These are the kind of seeds we like to plant.”

For more information about the festival, go to www.remadeinholland.sk