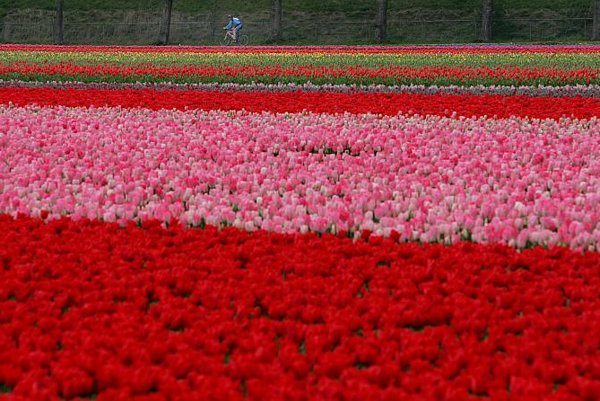 Tulips and bicycles are some of symbols of the Netherlands. (Source: SITA)
Font size:A-|A+  Comments disabled

Recycle, recycle, recycle
The Netherlands has the highest percentage of household waste recycling in Europe: 85 percent of Dutch waste is reused in some way.

Reclaimed land
About one quarter of the Netherlands consists of reclaimed land, the result of a process of careful water management dating back to medieval times. Some 1,100 mills, which in the past were used for milling grain, sawing timber and controlling water levels across the low-lying country, continue to be a symbol of Holland’s struggle with water.

Tulip Mania
Tulip mania is believed to be the first speculative market bubble. It occurred in the 17th century when contract prices for bulbs of the recently introduced tulip flower reached extraordinarily high levels and then suddenly collapsed. In around 1635, some people were prepared to pay the same amount of money for a bag of tulip bulbs as for several houses along the canals of Amsterdam. The bubble burst early in 1637, when doubts arose as to whether prices would continue to increase. Almost overnight the price of tulips collapsed, sweeping away fortunes and leaving behind financial ruin for many ordinary Dutch families. Today, Holland exports 6.5 billion bulbs worldwide, generating more than $500 million a year.

Take a boat, not a car
Holland has more than 4,400 km of navigable rivers, canals and lakes, enabling the Dutch as well as tourists to travel across the country by boat.