Paneláky to get new thermal shells

THOSE SYMBOLS of socialist architecture, the concrete blocks of flats that Slovaks call “paneláky”, might soon benefit from a massive thermal insulation programme as part of the government’s package of measures to ease the impacts of the global economic downturn. 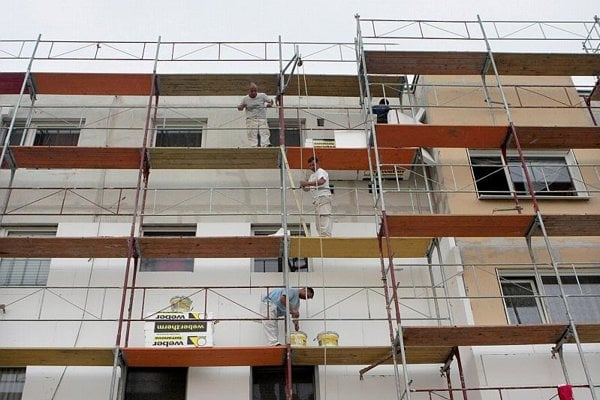 THOSE SYMBOLS of socialist architecture, the concrete blocks of flats that Slovaks call “paneláky”, might soon benefit from a massive thermal insulation programme as part of the government’s package of measures to ease the impacts of the global economic downturn.

Under the programme’s €71 million budget between 18,000 and 25,000 older apartments and family houses might get a more energy-efficient exterior shell as the primary goal of the plan, according to the Construction Ministry, is to reduce energy consumption and thus housing costs for citizens.
The cabinet of Prime Minister Robert Fico has already passed draft amendments to the construction and State Housing Development Fund (ŠFRB) laws that would provide a government-supported push for thermal insulation of older residential buildings and family houses. Parliament will deal with the draft in a fast-tracked legislative procedure, probably in June.

The country’s opposition, however, has criticisms of the programme. One is that the €71 million budget comes from the questionable sale of Slovakia excess CO2 emissions quotas for less than two-thirds of the price obtained by some of Slovakia’s neighbours. The opposition says the available sum could have been much higher if Slovakia had made a more advantageous sale of its quotas.

The state plans to start the process of approval for the no-interest rate loans, which can cover 100 percent of eligible construction costs, in July. The loans will be provided by the ŠFRB and will be repayable over 15 years. The ministry also hopes that the plan will create about 8,000 jobs.
There is a loan cap of €50 per square metre of the insulated area in family houses and €80 per square metre in residential buildings.

Administrators of apartment houses, owners' associations and also owners of family houses which had been approved for occupancy before 1989 are eligible for the loans. Applications will be received by local municipal offices, the SITA newswire wrote.

Any applicants who had already submitted documents for house reconstructions which included insulation under a different scheme will have to re-submit their applications to ŠFRB, the ministry explained, because these older applications have a scope wider than just insulation.

Construction Minister Igor Štefanov said that if parliament passes the legislation at its June session the programme can get rolling on July 1.

While the construction sector welcomed the scheme, professional associations also warned that the thermal insulation programme might not get underway as quickly as the government plans due to the complicated administrative procedures.

“The existing applications of eligible applicants which were registered at the ŠFRB and were not covered from the available €57 million will now have to be returned for re-elaboration due to the new conditions of the government’s insulation programme,” the Slovak Association of Construction Entrepreneurs (ZSPS) wrote in a news release. “In some cases this will be happening for a third time.”

The association said that to speed up the process the government should elaborate a simpler procedure for submission and approval of the applications and also suggests that the older applications should be simply moved under the new programme. The construction minister, however, said this is not possible.

“How do you imagine it: to distribute the money in plastic bags,” Štefanov said, as quoted by private television Markíza.

Experts claim that the €71 million package will fall far short of covering all the blocks of flats and family houses that are in need of restoration and thermal insulation. Given the very poor condition of many apartments and family houses, Pavol Giller, the head of the section for economics of housing at the Ministry of Construction and Regional Development told The Slovak Spectator that in order to reach an “ideal state” it would be necessary to invest €23 billion into the reconstruction of older houses. Of this sum, about €10.5 billion would be needed just for thermal insulation of apartments and houses, he added.

There are three supporting tools for thermal insulation of apartments and family houses this year, according to Giller.

“Considering the neglected condition of many of the blocks of flats and the high energy demands of buildings in Slovakia, these resources are not satisfactory,” Giller told The Slovak Spectator.
“However, it cannot be expected that the state would allocate additional non-refundable resources for this goal since by insulating the property the apartment owners are gaining additional value.”

In addition to low-energy efficiency, there are some blocks of flats, particularly those built within the so-called mass construction period, which suffer from roof leaks, outdated and often dangerous elevators, unsafe balconies and the existence of asbestos materials, Giller said.

The increase of funds available for housing insulation will improve the energy efficiency of buildings in Slovakia and help to reduce greenhouse gases emissions .

“Slovakia has a long-term obligation within the EU to reduce greenhouse gases and thus we see this increase in funds as a starting base,” Anton Novotný, the executive director of the civic group Association for Insulation of Buildings, told The Slovak Spectator. “It is necessary to support insulation of all types of housing and also to resolve forms of support for non-residential buildings. We should better use EU funds and also other financial resources from international funding sources.”

Novotný said there are also other helpful measures which require only small legislative adjustments and that it is also possible for Slovakia to use more renewable energy resources.

Slovakia’s largest opposition party, the Slovak Democratic and Christian Union (SDKÚ), claims that the government’s questionable sale of excess emissions quotas deprived the country of more than 12,000 new jobs. The SDKÚ argues that if Slovakia had sold the quotas for a more advantageous price, then additional funds could have been available for thermal insulation projects and thus more jobs, about 20,200, could have been created, SITA reported.

“In times of crisis it is incredibly arrogant behaviour by the government towards people,” said Stanislav Janiš of the SDKÚ.