THE ELECTIONS to the European parliament were awaited by observers of Slovak politics not just for the changes they were expected to bring to Slovakia’s representation in Brussels. The elections were also when the renegade Hungarian Coalition Party (SMK) members Béla Bugár, László Nagy and Gábor Gál, who had left the SMK parliamentary caucus on April 22 over disagreements with the party’s leadership and its ways of managing the party, were expected to finally decide on their future in the party. The MPs’ decision came on June 7 with an announcement that they were officially quitting the party. 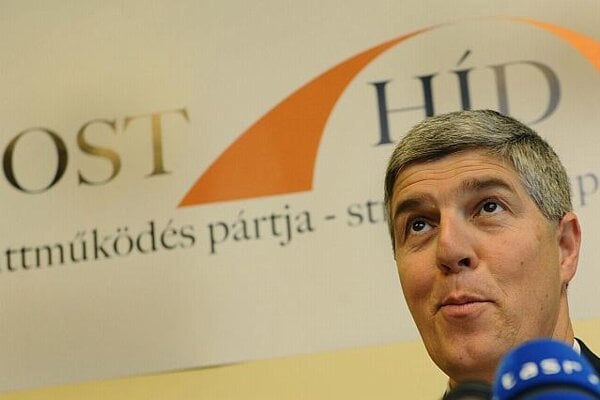 Béla Bugár says Most-Híd will be open to everyone, regardless of nationality (Source: TASR)
Font size:A-|A+  Comments disabled

THE ELECTIONS to the European parliament were awaited by observers of Slovak politics not just for the changes they were expected to bring to Slovakia’s representation in Brussels. The elections were also when the renegade Hungarian Coalition Party (SMK) members Béla Bugár, László Nagy and Gábor Gál, who had left the SMK parliamentary caucus on April 22 over disagreements with the party’s leadership and its ways of managing the party, were expected to finally decide on their future in the party. The MPs’ decision came on June 7 with an announcement that they were officially quitting the party.

Following that declaration, the three MPs, along with Zsolt Simon, a former agriculture minister whose disgruntlement had led him to leave the SMK in March 2009, and a fifth SMK MP, Tibor Bastrnák, announced that they were founding a new party. Named Most–Híd (Bridge in English), the MPs say they intend it to be the first political party in Slovakia to bring Slovaks, Hungarians and members of other minorities together under one banner.

“It was one of the most difficult decisions in our professional lives,” Bugár said. According to him, negotiations with the SMK had ended two weeks earlier and there had been no attempt at communication by SMK leaders since then.

“The SMK has turned into a party that in the past two years has had neither a comprehensive programme nor a vision and cannot express itself clearly,” Bugár told journalists, adding that the SMK is isolating itself and losing its political importance, and that it is not the party he helped found in 1998.

“Therefore we left and we believe we can do more for the interests of the citizens through an alternative [party],” he concluded.

Most-Híd, which means bridge in Slovak and Hungarian respectively, also carries the motto ‘the party of cooperation’ in its name. According to Bugár, it is being initiated by Hungarian-speakers and will naturally have a programme for minorities, but through its next steps, specifically the creation of the party’s structure, they want “to show that the nationality of any one of us should not be an obstacle to us cooperating”.

On June 14 those behind the new party will start collecting the 10,000 signatures needed to allow the party to be officially registered.

The party founders see the position of their new party as being on the centre-right of the political spectrum. They did not specify who they see the potential partners for Most-Híd being, saying they did not want to exclude anyone, the SMK included.

“Nobody can expect us to treat the SMK as an enemy,” said Bugár. “The SMK will be, just like other subjects on the Slovak political scene, our competitor for the ballots of the voters.”

Grigorij Mesežnikov, a leading political analyst who heads the non-governmental Institute for Public Affairs, believes that both the SMK and Most-Híd will try to avoid a situation in which their electoral constituency might be split and, as a result, both might fail to make it over the five-percent threshold needed to make it into parliament. Such an eventuality would leave the Hungarian minority, which accounts for around 10 percent of Slovakia’s population, essentially unrepresented at a national level.

“Up to now the political representatives of the Hungarian minority have always proceeded rationally, even when there were several political subjects, they have always joined into a coalition,” Mesežnikov told The Slovak Spectator.

In 1997 there were three political parties representing the Hungarian minority, which merged before the 1998 elections to form the SMK. In 1992 the Hungarian Civic Party ran in the elections independently but none of its candidates were elected.

“This should serve as a warning to Hungarian politicians,” Mesežnikov said.

Bugár did not rule out that in the future they might be willing to go into a coalition with the SMK before the elections, on condition that they would avoid any offensive statements.

On the other hand, Csáky said he doesn’t see any reason for cooperation with Most- Híd if its founders were not able to cooperate within one party. However, if the new party has a notable level of support with the public next year, Csáky will ask Bugár to call on the SMK for support, because the SMK will always remain stronger, the SITA newswire reported.

“We recommend that our members do not leave the SMK and do not support the new party, because we do not need these adventures and we’ll do everything to convince our voters and supporters that the SMK is and will remain a party capable of action,” Csáky said, as quoted by SITA.

Csáky did not specify whether the SMK will ask its former members to give up their positions in parliament. For instance, László Nagy is the chairman of the Human Rights Committee. Gábor Gál has already announced he is giving up his chairmanship of the Committee for Incompatibility of Functions.

According to Csáky, founding a new party is a bad and ill-considered step.

According to Mesežnikov, founding the new party was a solution for a group of people who were not able to hold their positions in the SMK. He said it was more a reaction to the situation inside the party rather than the situation on the Slovak political scene and it is still difficult to see the difference between the two parties.

“If they left the SMK because they didn’t like the party’s solutions to minority questions or to Slovak-Hungarian relations, the voters could understand it [the difference],” he said. “But the reason was that the situation inside the SMK was unacceptable for them, and that has nothing to do with ethnic relations in the country.”

According to political analyst László Öllős, the cooperation between Slovaks and Hungarians presented by Most-Híd is just a political slogan – especially considering the fact that there is no Slovak among the founding members.

“This idea [of cooperation] was probably born only in the last few days or weeks,” he told The Slovak Spectator.

The process of Slovak-Hungarian reconciliation is complicated and it must happen in society and on the Slovak political scene.

“One political party is not enough to achieve reconciliation, for that there is a need for a common constitutional agreement,” Öllős said.