SEVERAL publishers of Slovak periodicals recently received a rather unusual letter from Slovakia’s justice minister, Štefan Harabin. Harabin, who has said he will run for the top post on the country’s Supreme Court on June 22, sent out-of-court settlement proposals to publishers of the Sme, Pravda and Plus Jeden Deň dailies, and the Plus 7 Dní weekly. 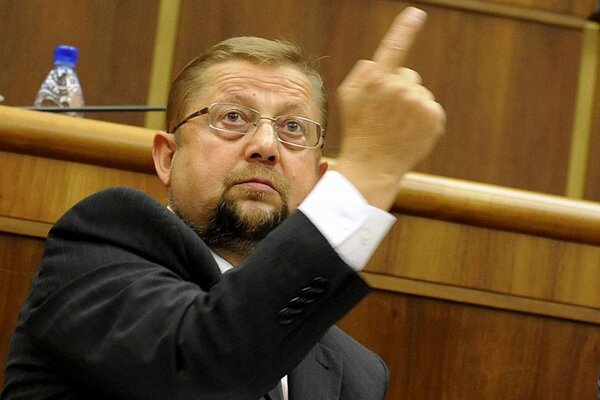 SEVERAL publishers of Slovak periodicals recently received a rather unusual letter from Slovakia’s justice minister, Štefan Harabin. Harabin, who has said he will run for the top post on the country’s Supreme Court on June 22, sent out-of-court settlement proposals to publishers of the Sme, Pravda and Plus Jeden Deň dailies, and the Plus 7 Dní weekly.

In his letters Minister Harabin told the publishers that their outlets had published articles that had severely damaged his good reputation and honour. He requested an out-of-court settlement of €200,000 from each publisher to be sent to his account within 40 days, in compensation for non-pecuniary damages he alleges he has suffered.

The cumulative sum requested from all periodicals is €600,000 (Plus Jeden Deň and Plus 7 Dní share the same publisher).

Harabin alleges that between 2008 and 2009 the periodicals published a series of libellous articles and that some of these linked him to the mafia and organised crime.

“The Sme daily between June 18, 2008, and May 23, 2009, published a series of untrue statements that linked my person with the mafia and organised crime,” Harabin wrote in his letter, as quoted by Sme on June 6. “The related articles severely damaged my good reputation and honour.”

Harabin, however, did not use the new Slovak Press Code to demand that an apology or a correction be published in the press.

The editors of the dailies said that the minister had not responded immediately when the stories appeared and that they believe the letters are an attempt to intimidate the independent media.

They also noted that Harabin sent out his letters just a couple of weeks before the election of the president of Slovakia's Supreme Court, for which the minister is one of two candidates. However,
the editors said that they find the means chosen by Harabin to cleanse his name rather interesting.
“It is very unusual and unhealthy for society,” Sme’s editor-in-chief Matúš Kostolný told The Slovak Spectator. “If the cleaning of his name was what Minister Harabin really cared about, he would have spoken out a year ago when the media covered his relationship with [alleged drug dealer] Baki Sadiki.”

According to Kostolný, Harabin could have also used the right of reply or correction, which is now embedded in the country’s Press Code.

“He has not done any of those,” said Kostolný. “Thus it seems that he is more interested in intimidating the independent media.”

Kostolný also suggested that this was not the first time that Minister Harabin and other politicians have requested inappropriately high sums from the media.

“In a decent society, it should not be about making money but rather cleaning their name,” Kostolný concluded.

The Association of Periodical Press Publishers, an umbrella group for Slovak newspapers and magazines, said that the sums Harabin is asking for are out of place.

“We acknowledge anyone’s right to defend their name and honour, but they should do it in a normal way,” said Miloš Nemeček, the head of the association, as quoted by Sme. Nemeček said that Harabin should first have used the Press Code and requested a correction or a response.

Opposition parties, at the initiative of Christian-Democratic Movement (KDH) MP Daniel Lipšic, launched an attempt in parliament last September to have the justice minister sacked for what Lipšic called Harabin’s friendly ties with Baki Sadiki, an Albanian man living in Slovakia who has been accused of involvement in the heroin trade and who has been convicted of crimes including illegal possession of firearms. However, the no-confidence motion in Harabin was defeated.

Included in the opposition’s proposal to recall the minister was a tape-recording of a 1994 telephone conversation between Harabin (who at the time was a Supreme Court judge) and Sadiki, which the opposition said confirmed the pair’s close relations, as well as a request by the head of the penal department of the General Prosecutor’s Office, Peter Fillip, that Harabin be excluded from decision-making in cases involving Sadiki.

The local media, including Sme, reported the case in detail and printed a transcript of the phone conversation. In it, Sadiki asks Harabin how his son is doing; Harabin asks whether Sadiki is already home and whether they arrived all right.

On September 9, 2008, Dobroslav Trnka, Slovakia’s General Prosecutor, confirmed at a press conference in Bratislava that the transcript of a 1990s telephone call between Harabin and alleged Albanian mafia drug boss Baki Sadiki was on file, the TASR newswire reported.

At that time, Prime Minister Robert Fico described the no-confidence motion as ungrounded. He said that Harabin, when a judge, did not violate his legal duties but proceeded in line with the law. Fico also stated that Harabin had successfully passed a National Security Office (NBÚ) check.