POLLING DAY for the European Parliament (EP) elections passed in Slovakia almost silently, with little excitement on the part of politicians or voters – with the possible exception of the candidates running for election. Some politicians’ attempts to play the so-called ‘Hungarian card’ – i.e. aggravate anti-Hungarian sentiment among Slovak voters – in the Slovak parliament shortly before the elections failed to fulfil their aim of raising sufficient emotion to make people run to the polling stations, in contrast to its effect before the presidential election a couple of months ago. In the end, Slovakia remained faithful to its image as the country with the lowest voter turnout in the European Union. 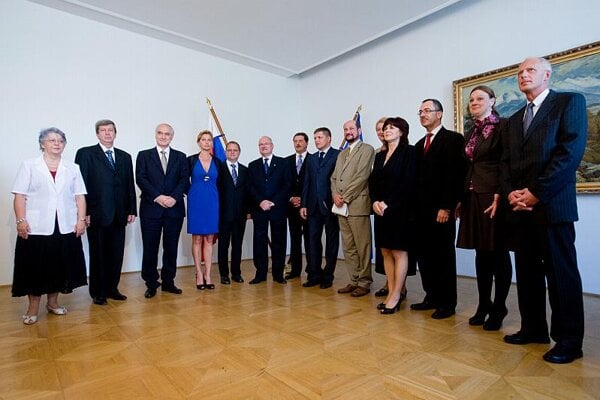 POLLING DAY for the European Parliament (EP) elections passed in Slovakia almost silently, with little excitement on the part of politicians or voters – with the possible exception of the candidates running for election. Some politicians’ attempts to play the so-called ‘Hungarian card’ – i.e. aggravate anti-Hungarian sentiment among Slovak voters – in the Slovak parliament shortly before the elections failed to fulfil their aim of raising sufficient emotion to make people run to the polling stations, in contrast to its effect before the presidential election a couple of months ago. In the end, Slovakia remained faithful to its image as the country with the lowest voter turnout in the European Union.

The slight increase in the number of voters who showed up to cast their ballots for their MEPs-to-be – from less than 17 percent in 2004 to 19.64 percent this time – wasn’t enough to shift Slovakia from its position as the EU’s most reluctant voter, even compared to other generally apathetic central European countries. Lithuania gave Slovakia a close run for its money with a turnout of around 21 percent, while Poland managed 24.5 percent.

Despite that, sociologist Pavel Haulík believes that the increase in turnout, even one this small, is a positive sign, as in the last five years election turnouts have in general followed a declining trend.

In Haulík’s opinion the low turnout was caused by Slovakia’s focus on itself.

“With Slovakia being a young and small country, the voters feel that they cannot influence happenings in the European context and that the few seats that Slovaks have [in the EP] cannot influence the decision-making and functioning of the EP in a significant way,” Haulík told The Slovak Spectator, adding that this philosophy will gradually be dismantled.

Another problem is that Slovaks are still not sufficiently informed about the EU and its institutions, including the EP. Haulík blames that partly on a media that does not run European news very often, but mainly on the political parties who, according to him, do little to raise interest in European politics among voters.

“Most of the MEPs have been deeply anonymous during the past five years: we have hardly heard from them at all,” he said.

Listen to the voter’s voice

The selection of candidates for future MEPs on the political parties’ candidate lists did not reflect the image the voters have about their representatives in the European Union either, which Haulík sees as another reason why many voters who were hesitant about voting eventually decided not to choose anyone.

“The parties did not make any efforts to find out what voters want and were offering everything except what the voter really prefers,” Haulík told The Slovak Spectator. “They did a really bad job and it should inspire them to follow the opinions of the voters rather than just the relations and conditions within their parties when creating candidates’ lists.”

Many voters, dissatisfied with what the political parties offered them, used the opportunity to give their preferential votes to individual candidates. In some cases this resulted in significant changes in the order of candidates chosen from party lists.

For instance, the Smer party’s sitting MEP Monika Flašíková-Beňová was placed third on the party’s list before the vote, but the more than 107,000 preferential votes she received pushed her to the top of the list, ahead of Smer’s number one choice, Boris Zala. The result was even more surprising given that before the elections there were discussions about whether Flašíková-Beňová would even appear on Smer’s list of candidates at all. During the five years she has served as an MEP her opinions have often differed from the views of the party leadership, something she confirmed following these elections when she told the Sme daily that she was hoping that Smer’s coalition partner, the Slovak National Party (SNS), wouldn’t make it to the EP and that for Smer the most rational solution would be to go into a coalition with the Slovak Democratic and Christian Union (SDKÚ) after the 2010 national elections.

Further proof that experienced MEPs are preferred by electors in Slovakia was provided by those who voted for the Christian-Democratic Movement (KDH). More than 43,000 of them gave their preferences to sitting MEP Anna Záborská, who thus jumped from third to first place on the KDH list, while almost 30,000 gave their votes to Miroslav Mikolášik, who as a result rose from fourth to second. Since the KDH won only two seats in the EP, the party’s pre-election number one choice, Martin Fronc, its vice-chairman and a former education minister, wasn’t elected. Following the election result, he quit his party leadership position on June 8.

Another number one that ultimately wasn’t elected was Dušan Švantner of the SNS. Instead, the almost 13,000 preferential votes given to party vice-chairman Jaroslav Paška meant that he will take up the only EP seat won by the SNS.

The SNS expressed disappointment at the 5.5 percent share of the vote the party attracted.

Vice-chairwoman Anna Belousovová said the results were influenced by the “heavy media campaign, which brought into play all of our faults”. She added that such a campaign had never been seen in Slovakia before, the SITA newswire reported.

Political analyst László Öllős attributed the SNS’s poor performance to the numerous scandals which have affected the party’s representatives over recent months, such as controversial tenders and the sale of emissions quotas.

“And their reaching for the Hungarian card in the last week before the elections was so blatant, it was obvious that they were only trying to use it to cover everything they had done before,” Öllős told The Slovak Spectator.

According to the Sme daily, fear of the effect of the Hungarian card may have worked in favour of the Hungarian Coalition Party (SMK). Several regions with significant Hungarian-speaking populations recorded above-average turnouts, for instance almost 30 percent in Štúrovo, and 24 percent in Dunajská Streda.