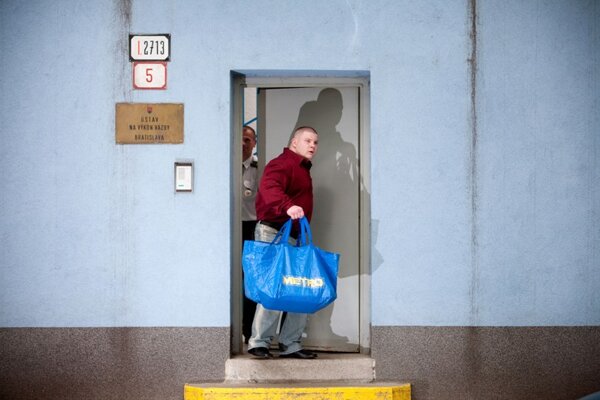 Richard H., who was charged with the murder of student Daniel Tupý, was released from prison on June 16. (Source: SITA)
Font size:A-|A+

Daniel Tupý was stabbed on November 4, 2005, on the Tyršovo embankment in the Bratislava district of Petržalka. Seven friends with him at the time were also assaulted. According to witnesses, the offenders chose Tupý because of his appearance - black clothes and long hair. He had a guitar with him when he was killed. Witnesses also testified that there were nine attackers, who shouted: “We are skinheads!” Tupý was pronounced dead upon arrival at hospital.

The father of the victim, Daniel Tupý Sr, asked the court on June 10 to subject the defendants and the main witness, whose identity was concealed, to a lie detector test. The prosecutor backed the request, admitting that there was a lack of evidence in the case. A day later, on June 11, the anonymous witness refused to speak in front of the court and withdrew an earlier statement, made during a pre-trial hearing.

“What I’ve said before wasn’t based on the truth, I will not say anything more, I wasn’t there [at the Tyršovo embankment at the time of the murder],” he said, as quoted by SITA. He said he was only willing to answer questions from the defendants’ lawyers, but they said they had none. In its reaction, the Interior Ministry said they had information indicating the reason for the witness’s unwillingness to speak.

“Unfortunately, the police do not have the tools to enter the minds of the witnesses,” said ministry spokesperson Erik Tomáš, as quoted by SITA.

Despite the lack of evidence, the prosecutor asked the court to find the defendants guilty of the acts for which they were charged.

After the trial Tupý Sr said he was disappointed with the whole process. He said his main objection was with the way the court had acted and he again asked why the court had refused to test the defendants and the witness with a lie detector. Earlier, Tupý Sr complained that the case wasn’t ready for a court trial.

“There was strong pressure from the police presidium to pass the case on to the court,” he told SITA.

According to Tomáš from the Interior Ministry, this was within the competence of the prosecutor’s office, which would never go to court with the case if anything wasn’t right. The police will continue doing everything to bring light to the crime, he said.

Interior Minister Robert Kaliňák established a special team in October 2007 to investigate the Tupý case. In February 2008 the police charged one person with the crime and accused three others of related offences. One of the three accused committed suicide before the arrests were made, the TASR newswire wrote.

“The accused seem to be supporters of extremist groups,” said Kaliňák. The accused were taken into custody. There were fears that Richard H., who was accused of the murder, would attempt to flee or avoid trial; the other two accused were held in order to prevent them contacting witnesses. Later, in June 2008, another two men were charged with taking part in the attack.

The prosecutor’s office received the investigation file on September 3, 2008, and started preparations to file the court complaint.

The lawyer representing Richard H., Peter Filip, said after the verdict that he did not expect the court to rule otherwise, as no flawless or relevant direct evidence was produced during the trial.

“Too much power and energy was devoted in the wrong way,” Filip said, as quoted by SITA.

On June 16, Minister Kaliňák called on all the witnesses, including the friends of the murder victim, to cooperate with the police and help clarify the case. He said he was disappointed with the verdict, though this has still to take effect.

“I believe the prosecutor’s office will act accordingly,” he said as quoted by the TASR newswire.

The prosecutor has said she will consider appealing the decision after reading the verdict in its written form, SITA wrote.