CITIZENS who added their signature to a protest petition against Justice Minister Štefan Harabin becoming the next president of Slovakia’s Supreme Court as well as head of the country’s Judicial Council received a surprising e-mail response saying “Thank you for your vote” with the minister’s name included. Yet, this is only one small fragment of the political events swirling around Minister Harabin in recent days. 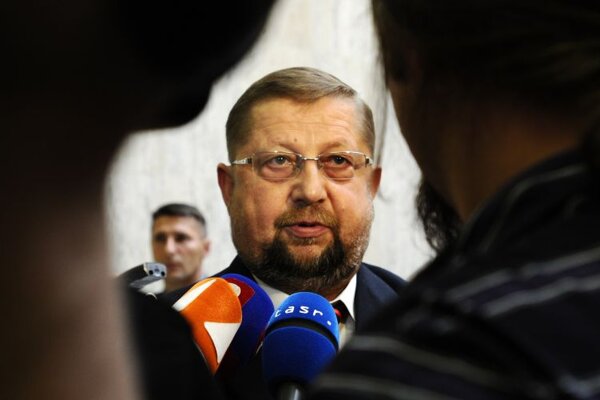 CITIZENS who added their signature to a protest petition against Justice Minister Štefan Harabin becoming the next president of Slovakia’s Supreme Court as well as head of the country’s Judicial Council received a surprising e-mail response saying “Thank you for your vote” with the minister’s name included. Yet, this is only one small fragment of the political events swirling around Minister Harabin in recent days.

The minister, nominated by the Movement for a Democratic Slovakia party (HZDS), is currently running for the presidency of the Supreme Court while simultaneously his ministry has been attempting to transfer some powers away from the Justice Ministry and to the Supreme Court president and to the head of the Judicial Council, the positions to which Harabin aspires.

The ambitions, actions and past deeds of the Justice Minister are being closely monitored by the media and by several political ethics watchdogs, including the Fair Play Alliance, which has launched a website devoted to Harabin with its arguments for why he should be stopped in his march to the head of the Supreme Court.

Another ethics watchdog, Transparency International, wrote a letter to deputies of the Slovak parliament in which it points to what it calls “the bad situation in the Slovak judiciary and the inappropriate changes proposed by the Justice Ministry”.

The Justice Ministry has called the Fair Play Alliance’s initiative an unfair campaign while the governing coalition led by Prime Minister Robert Fico has postponed further discussion about the draft revision to the law on judges, which would embed the transfer of judicial powers, to parliament’s September session.

Meanwhile, a former justice minister and current MP for the Slovak Democratic and Christian Union (SDKÚ), Lucia Žitňanská, read her call to parliament for the Judicial Council to refrain from supporting Harabin’s Supreme Court bid on June 16. After other deputies were reluctant to support her request she said it should nonetheless be viewed as her personal call.

Harabin promptly deemed Žitňanská’s statement to be one which contradicts a basic pillar of democracy, the division of power between legislative, executive and judicial branches.

The Fair Play Alliance’s website at www.cervenapreharabina.sk means “Red light for Harabin” in English and features a way for citizens to protest against Harabin’s election to the post of Supreme Court president.

The website contends that as the ‘first person’ of the judiciary, which Harabin would be as Supreme Court president and chairman of the Judicial Council, a candidate must have an unblemished record and should perform tasks independently with deep respect for justice, truth and ethics. Such a person, according to the alliance’s website, should be able to lead by example.

“We see Štefan Harabin for his past concrete acts to be a direct threat to justice, independence, impartiality, honesty and the judiciary as such,” the Fair Play Alliance writes. “Minister Harabin was publicly caught lying at a parliamentary session and threatening a deputy as well as making unacceptable references to race and origin. Štefan Harabin also has had unacceptable personal contacts with a person suspected of drug-related crimes.”

The alliance referred to the minister’s alleged contacts with Baki Sadiki, an Albanian man living in Slovakia, who has been accused of involvement in the heroin trade and who has been convicted of various crimes, including illegal possession of firearms. Last September, opposition parties, at the initiative of Christian Democratic Movement (KDH) MP Daniel Lipšic, launched a parliamentary attempt to have the justice minister sacked for what Lipšic called Harabin’s friendly ties with Sadiki. The no-confidence motion failed.

The local media, including the Sme daily, reported on the case in detail and printed a transcript of a tape-recording of a 1994 telephone conversation between Harabin (who at the time was a Supreme Court judge) and Sadiki. Harabin subsequently sent letters to several publishers of daily and weekly periodicals asking for an out-of-court settlement totalling €600,000 for what he called articles that had severely damaged his good reputation and honour.

The Fair Play Alliance launched its e-mail petition to campaign against Harabin’s election as president of the Supreme Court. When a person adds his or her name to the electronic petition system used by the alliance, an e-mail is automatically sent to the members of the Judicial Council with a plea to not vote for Harabin. On June 12, signers of the electronic petition were quite surprised when they received replies from the Justice Ministry saying “Thank you for your vote. Štefan Harabin, Justice Minister.”

That e-mail to petitioners was sent by Lucia Hatasová, an assistant to Daniel Hudák who is state secretary at the Ministry and at the same time serves as a member of the Judicial Council.

According to Wienk, the ministry unambiguously has overstepped its authorities.

“I do not understand why bureaucrats who are paid from the money of taxpayers devote their working time to managing an agenda that is not related to their work,” Wienk told The Slovak Spectator.

According to Justice Ministry spokesperson Michal Jurči, every member of the Judicial Council has a notebook computer provided by the Council.

“The e-mails sent by the alliance came to the Justice Ministry, not to the Judicial Council,” Jurči told The Slovak Spectator.

He referred to a text which he said appeared on the Fair Play Alliance website: “The alliance, with the support of several personalities, calls on the Judicial Council to not vote for Harabin to the post of president of the Supreme Court. Everyone can join the campaign. After signing the campaign petition, an e-mail with the name of the supporter is automatically sent to the Judicial Council.”

“The e-mail concerned Minister Harabin and thus he responded,” Jurči told the Slovak Spectator. “If saying thanks is an impolite way for someone, then the person is mixing up the impressions and expressions.”

Meanwhile the Justice Ministry has accused the Fair Play Alliance of using ‘dead souls’ for its campaign.

“The Justice Ministry has set an automatic reply from its computer when the e-mails were arriving from the alliance,” Jurči said. “It turned out that several ministerial responses were undeliverable for different reasons, for example due to a non-existent mailbox. There were citizens who claimed that they were abused and had not supported any such call and are on the contrary supportive of the minister.”

Jurči said the so-called dead souls were confirmed by Wienk to Sme.

“It is not possible to talk about transparency, since such a campaign can be abused,” Jurči said.

Wienk had told Sme earlier that dead souls could appear among the signatories but that the Fair Play Alliance regularly cleans the database. She added that the electronic petition is a standard way of campaigning.

“Slovakia is not a police state, the law doesn’t require verification of data at signatory actions,” she said.

The Fair Play Alliance has called the responses sent out from the ministry to the signers of the petition more than a bad joke and accused the ministry of threatening citizens.

More than 8,900 people had signed the petition by June 17. Wienk said that now people seem even more encouraged to sign the petition and to protest this style of politics and “this abuse of e-mail communication between members of the Judicial Council and the petition signers”.


The Fair Play Alliance claims to be ready to protect any people who are or were subjected to intimidation and pressure.

Meanwhile, the Týždeň weekly has published interviews with four judges of the Supreme Court, three of whom suggested that Harabin, while serving as the Justice Minister, has no right to run as a candidate for election as president of the Supreme Court. The law states that only a judge is eligible to be elected as the Supreme Court president and some lawyers argue that Harabin cannot be treated as a judge because his practice has been interrupted while he holds ministerial office.

The Justice Ministry reacted to this argument by publishing an extensive review and explanation of the law in which the ministry concludes that Harabin is eligible to head the Supreme Court.

The Fair Play Alliance, after similar consultations with experts, also believes that Harabin is eligible to run in the election.

“However, we see a big problem in another fact: that many of the Judicial Council members are dependent in their positions on Harabin,” Wienk said, adding that these seven or eight judges cannot be considered impartial in relation to one of the candidates.

“Therefore we believe that the election will not be fair and will not ensure equality of chances for all the candidates,” said Wienk.