A love of telling tales

“Lord sturgeon amidst motley fish, one or several of them are going to satisfy his hunger, feeding him by their unhappy end of life.” This is not an abstract from a book of fiction. Instead, it is the title of a painting (in the picture) by Robert Combas. Works by this prominent contemporary French painter are on show in the Danubiana gallery, located on an artificial peninsula linked to the Čunovo dam on the Danube River, through to the end of August. 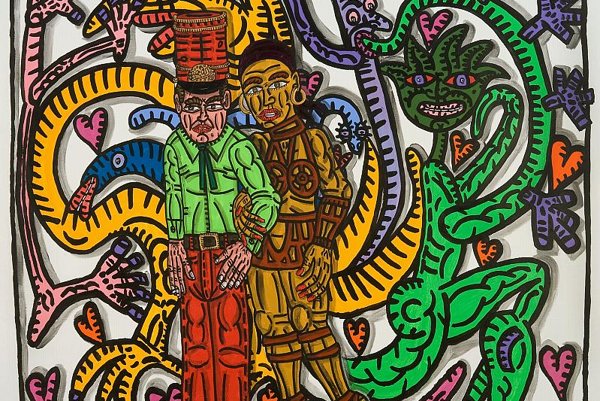 The couple coming back from far away , by Robert Combas (Source: Courtesy of Danubiana)
Font size:A-|A+  Comments disabled

“Lord sturgeon amidst motley fish, one or several of them are going to satisfy his hunger, feeding him by their unhappy end of life.” This is not an abstract from a book of fiction. Instead, it is the title of a painting (in the picture) by Robert Combas. Works by this prominent contemporary French painter are on show in the Danubiana gallery, located on an artificial peninsula linked to the Čunovo dam on the Danube River, through to the end of August.

“We are very happy that we can exhibit works by such a prominent artist,” Vincent Polakovič, the director of the Danubiana Meulensteen Art Museum told The Slovak Spectator. “This is because never before has such a renowned French artist had such an extensive exhibition in Slovakia and also because his artwork is very interesting and esteemed worldwide.”

Within its Freedom, Diversity and Oppression exhibition the Danubiana gallery presents artworks from all important periods of Robert Combas’s career so far. The entrance of the gallery is protected by two painted bronze fighters and a huge black-and-white sculpture described as “At the beginning, it was the Venice Venus, now it is ISIS, sure and certain” dominates the gallery’s main hall.

Combas’s painted clothing is represented by 12 T-shirts with faces on their fronts. The ‘sturgeon’ work, mixed media on canvas, is from his Fishes Aquarium series. Upstairs there are Academic Tattoos and Photographic Paintings in which Combas uses photography as a ‘canvas’ for his paintings.
“Robert Combas personally visited Danubiana in December and selected works for the gallery,”

Polakovič told The Slovak Spectator. “He selected works from all the periods during which he created his principal paintings, sculptures or painted photos.

There are works from the Fishes Aquarium series, Academic Tattoos on the motifs of Greek mythology, and painted guitars through which he pays tribute to van Gogh and others.”

“I love telling stories,” Combas says about his works. “There is always something very personal in my pictures. I speak about contemporary life – about mine or others'.”

Combas narrates the stories in his paintings and then also accompanies them with charming texts. The images of his paintings blend the irony of traditional and contemporary culture through caricature and parody of kitsch. In his works he cites and draws inspiration from Greek art and culture up to the contemporary scene. He paraphrases Dada, Art Brut, the Cobra, Pop Art, and underground culture as well as advertising, animated film, cartoons and other mass media expressions.

Combas is a member of Figuration Libre movement which he initiated with Remi Blanchard, Francois Boisrond and Herve di Rosa as a reaction to the art establishment in general and to Minimalism and Conceptual art in particular. This new style – ‘the art of attitude’ – aims to do away with beauty and be based on drawing from spontaneity, rudimentary form and naive art and was rooted in everyday personal experience, writes Eva Trojanová in the exhibition leaflet.

Maybe the myth of spontaneity of the Neo-Dada type, the will to remain free in the primary or naive sense, radical individualism which changes the picture into the ‘theatre of the world’ caused Combas’s fast rise to the highest artistic levels, according to Trojanová.

Polakovič believes that Slovak art lovers, as well as whole families with children, will find Combas’s joyful and colourful images attractive and will visit the gallery during the holiday season. More than 2,000 people have viewed the Combas exhibition so far, which Polakovič perceives as a good response given that the Danubiana gallery is 20 kilometres from Bratislava. He estimates that as many as 10,000 patrons will visit by the end of August. Polakovič expects that, as in other cases in which the Danubiana exhibited works of leading artists in Slovakia, the Combas exhibit is at the beginning of a further eastward trip in Europe and to Asia.

Born in 1957 in Lyon, Robert Combas spent his youth in Siete in the south of France. Since his childhood he has shown an exceptional talent for drawing and his parents encouraged him to embark on the artistic path. He began studying at Ecole des Beaux-Arts in Montpellier and earned his diploma at Saint-Etienne. At the beginning of the 1980s he was a progenitor of the Figuration Libre movement.

In addition to Combas’ exhibition, visitors can see a display of abstract works by Slovak artist Pavol Kráľ called Records of the 4th Dimensions as well as works by architecture students extending or completely rebuilding the premises of the existing gallery, called X tensions for Danubiana. This show of models and drawings is held on the occasion of the 10th anniversary of the gallery which will be celebrated in September.

A novelty this year for visitors to the Danubiana gallery is regular water transport on the River Danube between the gallery and Bratislava city centre. Each Saturday and Sunday, through October 11, a boat departs for the Danubiana at 14:00 from the Bratislava Passenger Port next to the Old Bridge with a return sailing at 16:30 from the gallery.

A roundtrip ticket for adults costs €8 and there is a reduced price ticket for children, students and the retired, of €4. If visitors arrive by boat, admission to the gallery is free. The voyage to the Danubiana takes less than one hour while the return trip lasts a bit longer because the boat is sailing against the river current.

For more information, go to www.danubiana.sk