PRESIDENT Ivan Gašparovič was sworn in for his second presidential term on June 15. He is the only president in the history of independent Slovakia to be re-elected to the office. 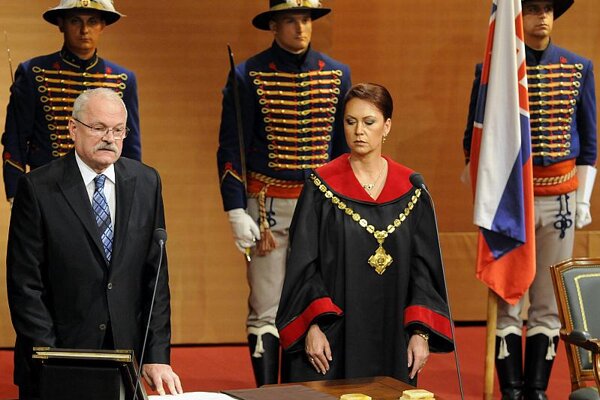 PRESIDENT Ivan Gašparovič was sworn in for his second presidential term on June 15. He is the only president in the history of independent Slovakia to be re-elected to the office.

In his inauguration speech Gašparovič focused on the economic crisis which he described as ‘the biggest challenge of our time’. He also said Slovaks have to struggle with the crisis even though they did not cause it.

He devoted attention to several topics but emphasised that it was neither his goal nor within his powers to cover the whole life of society in his speech and therefore he did not intend to list specific tasks or projects.

He added that the government is dealing with them on a daily basis and he fully supports its efforts to minimise the impacts of the crisis.

Gašparovič did not mention the Hungarian minority once, though its political representatives had criticised him for having abused the Hungarian card in his re-election campaign, the SITA newswire reported.

Deputies from the Hungarian Coalition Party (SMK) attended the official part of the inauguration; however the five MPs who left the party on June 7 stayed away from the ceremony.

The inauguration was attended by both former Slovak presidents, opposition politicians from Slovak Democratic and Christian Union (SDKÚ) and Christian-Democratic Movement (KDH), including Gašparovič’s challenger in the second round of the election Iveta Radičová, who admitted that at times she had imagined herself delivering the inauguration speech.

No foreign guests were invited to the ceremony.

The Movement for a Democratic Slovakia (HZDS), of which Gašparovič was a member when he served as speaker of parliament in the 1990s, abstained from the inauguration. The party held a meeting instead.