POLITICIANS and businesses often criticise the media for what they call its tendency to paint the prospects of countries afflicted by the economic downturn in much darker shades than the facts justify, all the while applying stirring adjectives like “dramatic”, “steep” or “massive” to the fall of economies worldwide. But the latest prediction for Slovakia’s economic performance, released by the Finance Ministry itself, is sufficiently bleak that it requires no further embellishment. 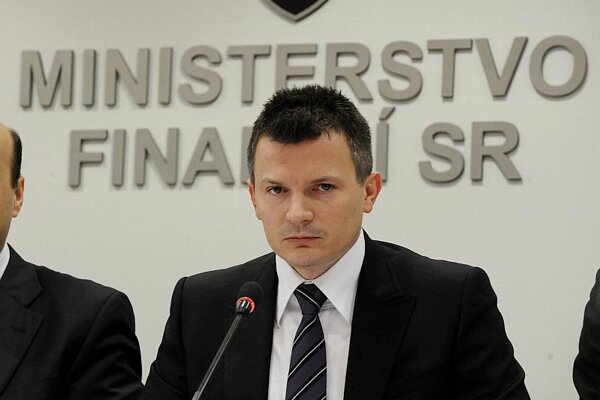 POLITICIANS and businesses often criticise the media for what they call its tendency to paint the prospects of countries afflicted by the economic downturn in much darker shades than the facts justify, all the while applying stirring adjectives like “dramatic”, “steep” or “massive” to the fall of economies worldwide. But the latest prediction for Slovakia’s economic performance, released by the Finance Ministry itself, is sufficiently bleak that it requires no further embellishment.

As recently as its February forecast the ministry was still predicting economic growth of 2.4 percent for 2009; now Minster Ján Počiatek’s department says that Slovakia’s economy will contract by 6.2 percent.

The estimate is considerably more pessimistic than the recent prognosis released by the National Bank of Slovakia, the country’s central bank, which forecast a 4.2-percent percent fall in GDP.

Počiatek confirmed that his ministry has taken a rather conservative approach.

Market watchers have greeted the estimate as ‘slightly pessimistic’ to ‘realistic’, but they all agree that the number of jobless will continue to swell and that the public finances are now bleeding red ink.

While Prime Minister Robert Fico has confirmed that revisions to the state budget cannot be avoided, the Finance Ministry has said that any action on this front can wait until September. This has dismayed economic observers, who suggest that the government is losing precious time, which could be used to make cuts, by delaying changes to spending. Meanwhile, former finance minister and deputy chairman of the largest opposition party, the Slovak Democratic and Christian Union (SDKÚ), Ivan Mikloš said that Slovakia faces the threat of a collapse of general government finances and accused the government of wasting public resources.

Openness has ups and downs

For VÚB Banka senior analyst Martin Lenko, the ministry’s prognosis is realistic, though it anticipates a steeper fall and slower growth in 2010 than the estimates of his bank.

“The reasons are the prevailing negative risks, mainly on the part of weak economic sentiment, which so far does not refer to any reversion in the trends of the development of Slovak economy; on the contrary it suggests further worsening,” Lenko told The Slovak Spectator.

Boris Fojtík, an analyst with Tatra Banka, views the prognosis as being slightly pessimistic; his bank is currently forecasting a 4.5-percent contraction in GDP.

“The main factors are the rapid drop in foreign demand and the decrease in investment activities. In the next quarters we also expect continuing weak household demand,” Fojtík told The Slovak Spectator.

Eva Sárazová, analyst with Poštová Banka, said that her bank is currently re-evaluating its macro-economic data – including its GDP estimate – and at this point she cannot provide a concrete number.

“But certainly, there will be a downward revision,” Sárazová told The Slovak Spectator. “The reason for the revision is the fact that the impact of the crisis on the Slovak economy is more aggressive and longer-term than we had assumed. For the next quarters we will scale down the numbers for consumption and investment while the numbers for foreign trade will not escape correction as well.”

The improvement in business sentiment indicated over the past couple of months by surveys conducted abroad might – after some delay – bring improvement in sentiment in Slovakia as well, but here Lenko sees an increased risk that improved expectations for the future might be linked more to one-off effects, such as the car-scrapping bonus and governmental stimuli.

“Until there is at least a partial improvement in real data it is appropriate to apply a rather sober and careful view, as presented by the Finance Ministry,” Lenko said. “We see a risk in the ministry’s prognosis only on the part of estimates for the development of public finances and their ratio towards GDP, where the Finance Ministry has tuned its prognosis quite optimistically given the forecast drop in GDP as well as the development of the state budget to date.”

“As the first quarter suggested, a drop in foreign as well as domestic demand stands behind the drop in GDP,” said Lenko.

According to Lenko, domestic demand will be affected mainly by falling household consumption, the effect of growing unemployment, the drop in investment due to weak demand, the reduced availability of loans and prevailing uncertainty.

“On the other hand, the public administration consumption will probably be one of the components contributing positively to GDP growth,” Lenko said. “The steep drop in exports on the other hand is linked to weak demand abroad, mainly in Germany, the other Visegrad Four (V4) countries [Poland, Hungary and the Czech Republic] and France.”

According to Sárazová, one of the reasons why Slovakia’s economy is turning from a leader in terms of economic growth into one of the fastest sinking is the fact that Slovakia is a strongly export-oriented economy.

Consequently, there is much less being produced in Slovakia, which results in people losing their jobs and living in greater uncertainty; indeed some are grateful even for the lower figures on their payslips, she added.

“They are re-evaluating their shopping habits; they are saving and thus not supporting the Slovak economy with higher consumption either,” Sárazová said. “Firms are being forced to reconsider their investments and expenses since their revenues are lower than a year ago.”

Fojtík said that one of the reasons why the Slovak economy’s slowdown has been the most significant among the V4 countries is the larger interconnection of the country’s economy with the economies of western Europe.

“Poland is the least intertwined and its prognosis for economic growth is much more optimistic,” Fojtík concluded.

Lenko agrees that it is the openness of Slovakia’s economy and the concentration of cyclically-oriented business which has contributed to the country’s standing among the V4.

On June 16, Fico said that revisions to the state budget will be on the agenda of coalition talks during the summer and a draft should be submitted in September. According to the prime minister, he had asked the ministry for the worst possible figures so that the budget would not be reopened multiple times, the SITA newswire wrote.

“I would appreciate it if we work with the most pessimistic estimate in order to avoid further revision,” Fico said.

Lenko, however, pointed out that by September it will almost be time to deal with the 2010 budget.
“Earlier reactions in this area would certainly be desirable,” Lenko said.

With the predicted fall of GDP set at -6.2 percent, Fojtík expects an additional €1.9 billion shortfall in the state budget and expects the 2009 state budget deficit to end up being about 5 percent of GDP.

According to Fojtík, such delayed reactions mean the chances and time for savings are gradually being wasted.

Hand in hand with the drooping economy, budget revenues are dropping as well; but if revenues are decreasing and expenses continue growing then the public finance deficit is deepening, added Sárazová.

“So far, with a -2.7 percent drop in the Slovak economy, we had predicted a public finance deficit of 4.5 percent of the GDP,” Sárazová said. “After revising [our estimate for] the fall of the economy this year, we also will revise our deficit estimate. A higher public finance deficit means higher debt for the country. But each country has to pay off its debts.”

Many countries already struggling with higher debt are being forced to reach for unpopular measures such as higher income taxes or payroll taxes to raise more money for the state budget, Sárazová said.

The Slovak Parliament approved the general government budget at the end of last year, projecting the deficit at 2.1 percent of GDP. After five months of this year, the budget deficit widened from April’s €347.4 million to €831.6 million. In the same period of last year, the state budget showed a €102.8 million gap. The deficit projection for 2009 is €1.009 billion, SITA wrote.