CHINESE President Hu Jintao’s visit to Slovakia on June 18 and 19 was supposed to nourish economic cooperation between the two countries. However, the arrival of the Chinese president, who during his visit met with several high representatives of the Slovak state, differed somewhat from Bratislava's experience of previous visits by senior foreign officials. 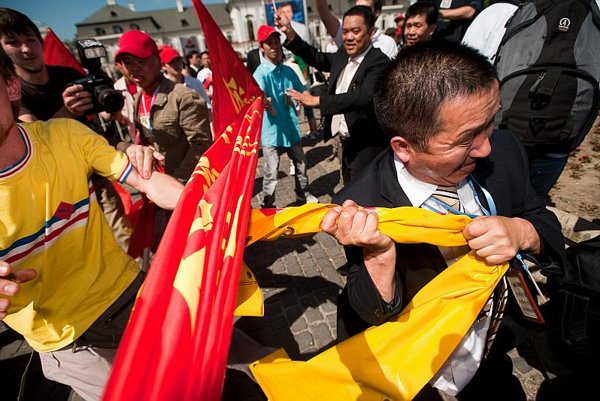 CHINESE President Hu Jintao’s visit to Slovakia on June 18 and 19 was supposed to nourish economic cooperation between the two countries. However, the arrival of the Chinese president, who during his visit met with several high representatives of the Slovak state, differed somewhat from Bratislava's experience of previous visits by senior foreign officials.

A stormy fight exploded shortly before Hu Jintao’s arrival between Slovak activists protesting against human rights violations in China and supporters of the Chinese president, thought to be part of his security detail, who attacked the demonstrators in Hodžovo Square. The attackers, dressed in dark suits, were seen tearing protest signs from the hands of demonstrators. The actions of the Slovak police suggested that they approved of the behaviour or were not willing to react, the Sme daily wrote.

Interior Minister Robert Kaliňák said at a session of the parliamentary committee for defence and security on June 22 that the police detained nine people after the clash, five Slovaks and four Chinese.

After initial hearings at the police station only one of the detained persons, a Chinese citizen, was accused of theft as he allegedly took leaflets from Slovak activist Ondrej Dostál, the head of the Conservative Institute think-tank.

Dostál was among the detained persons, originally identified as an offender for not obeying a police officer, but after the hearings the police re-classified him as a witness and a victim when he explained that he was only protecting his leaflets that a Chinese man was trying to take from him.

Another reported incident was an attack on a young Chinese woman, thought to be a Falun Gong activist, who is thought to have been pushed by supporters of the Chinese president and fell down the stairway to the subway and suffered head injuries.

Four groups, Amnesty International, Falun Gong, People in Peril and the Conservative Institute, have officially asked the police to apologise to the detained citizens whose peaceful demonstration was disrupted by people believed to have been acting on behalf of the Chinese president.

Kaliňák, along with other representatives of the Slovak government, believes that the police action was appropriate.

“The police intervention could only be considered appropriate if the police were assigned to watch over the Chinese provocateurs breaking up the protest of Slovak citizens for human rights in China,” Dostál told The Slovak Spectator, adding that the police were only observing the provocations on the part of the “organised Chinese” and they did not react to the calls for assistance from the Slovak citizens who were being attacked.

Dostál described the police intervention against some Slovak protesters as inappropriately rough.
“It’s sad that the police acted in coordination with the Chinese men who initiated the attacks on our citizens,” he said.

Gašparovič met President Hu Jintao on June 18 and they briefly reported to journalists that they had discussed ways for economic collaboration and also devoted attention to the global economic crisis.

Gašparovič opened his remarks by expressing satisfaction with the “official visit of the head of the state with a population of 1.5 billion who came to Slovakia to discuss possible cooperation with the president of the small Slovak Republic”, the SITA newswire reported.

It was the first visit of a Chinese president to Slovakia since the latter gained independence in 1993. Slovakia was the only EU country to host Hu Jintao during his European tour.

Prime Minister Robert Fico’s meeting with the Chinese president also focused on development of further economic cooperation, seen as one of the tools to overcome the global economic crisis. Fico outlined investment opportunities in Slovakia to the Chinese president, including the possible participation of Chinese firms with strong capital in construction of transport infrastructure, SITA reported.

A quiet gathering of people protesting human rights violations in China also occurred on the second day of the visit but the group was unable to get anywhere close to the cabinet office where Fico was receiving the Chinese President.

Opposition politicians expressed their suspicions that the men in dark suits were agents of the Chinese secret services. The opposition severely criticised Kaliňák for allowing Slovak state policing power to fail, as they said the Chinese individuals had attacked the Slovak protesters.
“This happened in the service of the Chinese communist regime,” opposition deputy and former interior minister Vladimír Palko said. “This was an intervention of Chinese state power.”

Palko demanded that Kaliňák explain at the current plenary session of parliament why the members of what he called the Chinese security forces were allowed to intervene against Slovak human rights activists. However, Palko won support only from oppostions MPs; their votes were not enough to pass his initiative calling for an enquiry, SITA reported.

Instead, Kaliňák explained his view of the situation to parliament’s defence and security committee on June 22, admitting that the Slovak activists were beaten by people from the Chinese Embassy in Slovakia, as the Sme daily had suggested earlier. He stated that the embassy had invited the persons wearing dark suits, among them people from the Association of Chinese Businessmen in Slovakia, the Union of Chinese in Slovakia and around thirty diplomats from neighbouring countries. It was some of these individuals who were caught on video cameras attacking the Slovak activists on the square.

“In this case it’s even worse, they should have been banished immediately,” activist Eduard Chmelár told The Slovak Spectator. “Tell me – which sovereign state would tolerate foreign diplomats beating up its citizens? It’s absurd.”

Opposition politicians proposed that parliament’s defence and security committee carry out a deputies’ inquiry at the Interior Ministry, at the Slovak Police Corps and at the Office for Protection of Constitutional Agents and Diplomatic Missions, but the committee did not pass the proposal.

Palko said the committee members did not agree with conducting the inquiry because “they are all communists”, SITA reported.

The aftermath of the presidential visit

Following the Chinese president’s visit, the police are conducting two possible prosecutions, one involving the theft of propaganda materials from activist Dostál and another one involving bodily harm to the young Chinese woman thought to be associated with Falun Gong.

In addition to these two cases, activists Eduard Chmelár and Michal Havran, who was one of the persons injured in the June 18 clash, filed a criminal complaint with the General Prosecutor’s Office on June 22. They did not complain about actions by a specific person but they requested that the actions of the police during the intervention be better investigated and for political and personal responsibility to be taken.

“The police were protecting the offenders and not the victims of the attacks,” Chmelár told The Slovak Spectator, adding that the human rights activists were calling on the police for help but “they acted like subordinates of the Chinese security service”.

Chmelár said that if one acts towards the superpowers humbly, they will not give respect and that all Slovak governments have always been too servile vis-a-vis the world’s powerful players – Dzurinda’s government to George Bush and Fico’s to the Chinese or the Russian president.

Dostál said that since the current Slovak state officials are reluctant to show concern about human rights violation in China, it is no surprise they are also not willing to deal with the situation in which Slovak citizens are harassed while attempting to express their opinions on the issue.

“It should be appreciated that they are consistent in ignoring human rights,” Dostál noted ironically to The Slovak Spectator. “They do not take human rights very seriously in China or in Slovakia.”