THE METAL birds of Slovak low-cost carrier SkyEurope Airlines are now flying under court protection from creditors while the company undergoes a financial reorganisation over the next three months. 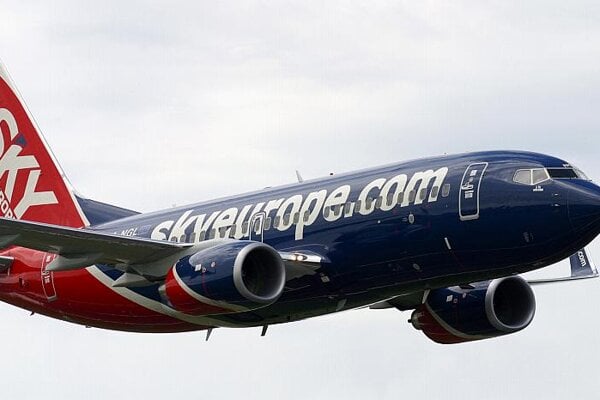 Taking off or throttling down? One of SkyEurope's fleet of Boeing 737s. (Source: ČTK)
Font size:A-|A+  Comments disabled

THE METAL birds of Slovak low-cost carrier SkyEurope Airlines are now flying under court protection from creditors while the company undergoes a financial reorganisation over the next three months.

Shortly after the company announced on June 22 that a Bratislava District Court had granted SkyEurope Airlines protection from its creditors, the media reported that its aeroplanes were encountering problems obtaining permission to take off from French, Bulgarian and Romanian airports.

After some delay, the airports in Sofia and Bucharest allowed SkyEurope’s planes to take off. But Paris’s Orly airport held one SkyEurope Boeing 737 overnight. On June 23 the company announced that it was in negotiations with the airport and that the plane would be released that afternoon.

However, as The Slovak Spectator went to press late on June 25, Orly Airport was still refusing to allow the plane to depart from Paris.

SkyEurope said that it has not filed for insolvency or bankruptcy and that it will pay its suppliers for goods and services provided during the reorganisation.

“Therefore airports and suppliers should not detain SkyEurope aircraft, owned or leased, or refuse to provide services for non-payment of historic debts to be registered in the reorganisation proceedings,” SkyEurope said in a press release on June 23.

The company, which is a subsidiary of SkyEurope Holding AG, also said that it will secure uninterrupted flight operations while respecting all its obligations towards holders of existing and future flight tickets.

The company also said that it would preserve and protect employment positions.

Jason Bitter, general director of SkyEurope, said that court protection from creditors was a good move for the company.

“It allows us fluent operation without any disruptions while we carry out our restructuring,” Bitter said.

The airline said it would not comment but added that if it found that the Czech firm’s solicitation was damaging the good name of SkyEurope, it would take further steps, the SITA newswire reported.

What is reorganisation under creditor protection?

First, the basic condition for a company to be granted a period of reorganisation under creditor protection is that the company is threatened by insolvency or has already become insolvent, lawyer Adriana Kováčiková said.

“An entity is insolvent when it has more than one creditor and is unable to pay a due financial obligation for more than 30 days after the date of its maturity, or the value of the company’s due debts exceeds the value of its assets,” Kováčiková, a lawyer at the Ružička Csekes law firm, told The Slovak Spectator. “Such a company may then authorise a trustee to elaborate a restructuring report which creates grounds on which the court will decide whether to permit the company's restructuring. It is not possible to grant a period of reorganisation to the company without this report.”

As for the impact that protection from creditors has on the regular operations of a firm, Kováčiková said that it is governed both by the greatest possible satisfaction of creditors and by preserving the existence of the business in some form.

The company’s operations are supervised by the trustee during restructuring and the company itself may conduct only basic legal acts necessary to preserve the company’s regular activities within its scope of business, said Kováčiková.

“In other words, the company continues providing its services,” Kováčiková. “But any other legal acts of the company require the approval of the trustee. The trustee must conduct this supervision in such a manner that the value of the company’s assets does not decrease nor frustrate the successful completion of the restructuring.”

Considering these facts, restructuring does not mean direct, exclusive protection from creditors but rather protection exercised through the trustee, she noted.

As to whether this process might still result in SkyEurope being declared bankrupt, Kováčiková said that after the court permits restructuring a creditor-initiated bankruptcy proceeding against the company is usually not allowed.

“Generally, if a creditor files an application with the court to declare bankruptcy after restructuring has been granted, the court will reject such an application,” she said. “Of course, there are several exceptions to this general rule.”

Based on Slovak legislation, the trustee has an obligation to file an application with the court to declare bankruptcy under certain circumstances. These include, for example, when a committee to represent creditors cannot be elected, when the company substantially and repeatedly violates its obligations under the Bankruptcy and Restructuring Act during the restructuring process, or when the restructuring plan is not submitted for necessary approval in the required period.

“The Bankruptcy and Restructuring Act also empowers the court to declare bankruptcy in certain situations even without the trustee making such an application,” Kováčiková concluded.