BACK in 2007, the British Council, the UK’s leading cultural relations organisation altered the way it operates in Europe. While its teaching and examination activities remained unchanged, it has changed from being a traditional bilateral cultural relations institute, which promotes culture abroad and provides grants to support events, into a partnership and network organiser supporting dialogue and links between countries and cultures. This change has already brought visible results in Slovakia. In April it launched the Slovakia Cultural Profiles website and completed the first years of its regional projects Intercultural Navigators and Challenge Europe, among others. 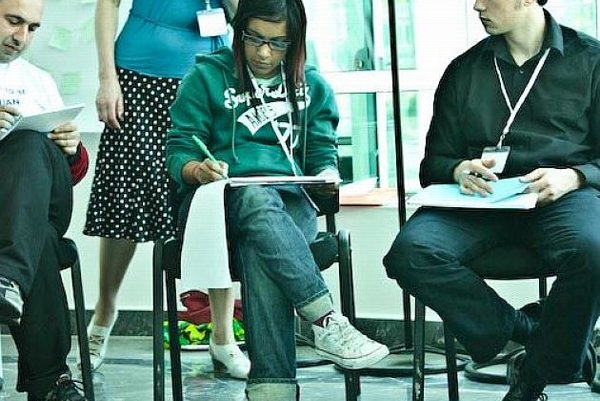 Intercultural Navigators met at an international event in Bratislava in May. (Source: Courtesy of British Council)
Font size:A-|A+  Comments disabled

BACK in 2007, the British Council, the UK’s leading cultural relations organisation altered the way it operates in Europe. While its teaching and examination activities remained unchanged, it has changed from being a traditional bilateral cultural relations institute, which promotes culture abroad and provides grants to support events, into a partnership and network organiser supporting dialogue and links between countries and cultures. This change has already brought visible results in Slovakia. In April it launched the Slovakia Cultural Profiles website and completed the first years of its regional projects Intercultural Navigators and Challenge Europe, among others.

“The regional projects are becoming very interesting and producing results,” Andrew Spells, who took over as director of the British Council in Bratislava in September, told The Slovak Spectator. “For me the exciting thing is that it is a longer-term commitment, so actually we are investing in groups of people in a particular area of work over a period of years rather than just focusing on one-off events. So I think that this has the potential to have a greater impact, to be more effective in terms what we are trying to do.”

Slovak culture on the web

Slovakia Cultural Profiles is a comprehensive website (www.slovakia.culturalprofiles.net) containing 7,000 pages of information and 3,000 links. This collaborative project between the Slovak Ministry of Culture, the British Council Slovakia and Visiting Arts is Slovakia’s first and only bilingual national cultural portal. It was designed to showcase Slovakia’s rich cultural heritage, to inform all types of international cultural exchange, to feed into cultural policy and cultural management curriculum development, and to promote cultural tourism.

“Both sides, the British Council and the Culture Ministry, have put a lot of effort and resources into it,” said Spells. “If you have a look at the site, it is a comprehensive view of all aspects of culture and heritage in Slovakia: in performing arts, visual arts, literature, libraries, things you can cover with the word culture in the broadest sense. It is a great tool to be used by schools, teachers, students and artists.”

This local project was an initiative by the British Council, whose input was in the form of know-how and technology.

“Slovakia is one of seven or eight countries that have such a portal and we are talking about millions of visitors per year to those portals,” Jana Riečanská, the spokesperson of the British Council in Slovakia told The Slovak Spectator. Finland, Slovenia, Japan and Vietnam also have such portals, but Slovakia is the only country that has a bilingual portal; all the others are just in English.

“A very good thing about this portal is that it is living, that people can call or write to have organisations or institutions included in the portal and there really is a lot of information in one place,” said Riečanská.

One of the two main purposes of the portal is to facilitate links between Slovakia and other countries in the arts. It enables not only the UK, but also America and other English-speaking countries to get information about Slovakia. The portal also works in the other direction, enabling people working in the arts in Slovakia to communicate what they are doing.

The University Library in Bratislava maintains and develops the Slovakia Cultural Profiles website on a day-to-day basis in order to ensure that all content is as up-to-date as possible.

“In this way we are trying to facilitate cooperation and exchange between Slovakia and other countries,” said Spells. “This is in fact very much in line with what we are trying to do, which is to promote dialogue, links and understanding between countries.”

And these are also the main goals which the British Council pursues in its other projects.

“Intercultural Navigators is a three-year project running in 15 countries across Europe focused on intercultural dialogue,” said Riečanská. “In the first year, which has already finished, a group of 21 young people received training. These cultural navigators came from different backgrounds, such as NGOs, university and secondary school teachers, students and businesses, and received training about developing intercultural skills and the knowledge to develop understanding and the ability to communicate between cultures. This does not mean only Slovak and British people, it might also mean different cultural groups within a country as well as between countries.”

The Intercultural Navigators project is a direct response to the very recent increase in the movement of people between new and existing member states of the EU and the lack of intercultural training available in many of the countries in the northern and central European region.

The British Council will now work with them for another two years on their own mini-projects, in which they will demonstrate what they have learned and implement their new knowledge and skills in their community.

“I think that this is a quite a good example of how regional projects can become quite powerful,” said Spells. “Twenty people in Slovakia will work together for three years. Across 15-16 countries in Europe that’s about 400 people going through a similar process, and we hope we chose people who may in some way in their own field be influential in the future.”

Another project, which has already brought some tangible results, is Challenge Europe. The British Council has closed the first cycle of this three-year programme and at the moment is recruiting people for the second annual cycle. Unlike the Intercultural Navigators, climate advocates, as attendees of this project are called, join it in annual cycles, each with a different group of people.

As part of the project, the British Council is providing the advocates with access to resources and counterparts in other countries working on the same scheme.

“They came up with some practical ideas to try and raise awareness about climate change,” said Spells.

In the first cycle, the Slovak climate advocates developed an educational portal focused on the environment for schools in Slovak, ran a competition for schools and colleges to design a T-shirt visually addressing climate change issues and translated the book Sustainable Energy – Without the Hot Air by David J. C. MacKay into Slovak.

“I think that regional projects are more powerful potentially than inviting a couple of hundred people to a concert, because what happens after than is just another concert,” said Spells. “Because we are working with these people for so long and because this may change their lives to some extent – and then because of the positions they are in – they will use in the future what they have learned in their careers, their communities.”