SLOVAKIA assumed the twelve-month presidency of the Decade of Roma Inclusion 2005-2015 programme on July 1, 2009, with an expectation that it would boost the integration of Roma into society in a variety of ways. But representatives of the non-governmental sector dealing with Roma issues used the occasion to criticise the government for what they see as its lack of activity and willingness to solve the problems of the Roma. 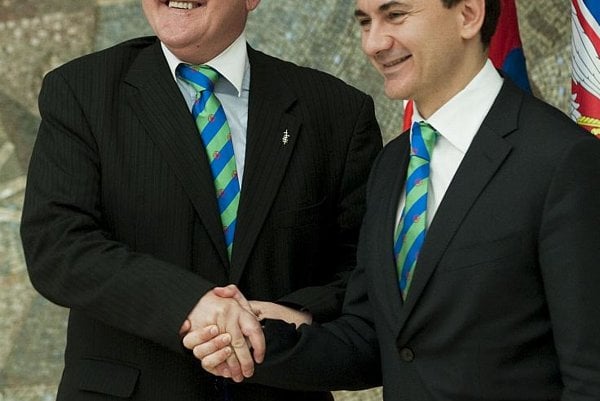 SLOVAKIA assumed the twelve-month presidency of the Decade of Roma Inclusion 2005-2015 programme on July 1, 2009, with an expectation that it would boost the integration of Roma into society in a variety of ways. But representatives of the non-governmental sector dealing with Roma issues used the occasion to criticise the government for what they see as its lack of activity and willingness to solve the problems of the Roma.

According to the website of the government plenipotentiary for Roma communities, there were an estimated 380,000 Roma living in Slovakia in 2001; many of them are unable to find jobs on their own, have low education and live in unsuitable conditions. Slovakia intends to use its experience with ethnic minorities, while the Roma culture will also be offered more space during the Slovak presidency.

The Decade of Roma Inclusion 2005–2015 is an unprecedented political commitment by European governments in cooperation with the World Bank and the Open Society Foundation to improve the socio-economic status and social inclusion of Roma. The Decade focuses on the priority areas of education, employment, health, and housing, and commits governments to take into account the other core issues of poverty, discrimination, and gender mainstreaming, according to the initiative’s webpage.

The twelve countries currently taking part in the Decade are Albania, Bosnia and Herzegovina, Bulgaria, Croatia, the Czech Republic, Hungary, Macedonia, Montenegro, Romania, Serbia, Slovakia and Spain. Each of these countries has developed a national Decade Action Plan that specifies the goals and indicators in the priority areas.

A day before Serbia passed the presidency on to Slovakia some Slovak NGOs active in the minority issues, namely the Milan Šimečka Foundation, the Roma Public Policy Institute and In Minorita, criticised the government for failing to solve the problems of Roma.

The government needs to fulfill its obligation to preside over the Decade not only by formally taking over the presidency from its predecessor but also by delivering on the basic principle of the Decade, which is the real inclusion of Roma in society, said Štefan Šarkőzy from the Milan Šimečka Foundation and the Roma Public Policy Institute.

“In reality the government only does it because it’s their turn,” Šarkőzy told The Slovak Spectator. According to Šarkőzy, the government hasn’t spent “a single crown” on the Decade programme yet and it’s practically unable to do anything concrete with the actual national Decade Action Plan. The framework of the initiative provides enough space for the government to use the presidency for finding concrete solutions to the problems of the Roma community, such as housing problems or poverty.

“Instead, we will have a year of folklore performances, which I have no doubt will be great, but at the same time I believe that we should use this year also in ways other than just showing that the Roma can play musical instruments,” Šarkőzy said.

Since the Slovak presidency will close the first half of the initiative, one of the Slovak government’s declared priorities is to encourage the participating countries to revise their national Decade Action Plans. Slovakia will revise its action plan in the first half of 2010, the TASR newswire reported.

On July 1, the day when Slovakia took over the presidency, the NGOs gave a symbolic final certificate to the vice-prime minister of the knowledge-based society, European affairs, human rights and minorities, Dušan Čaplovič, assessing as 'unsatisfactory' the results of his work in the three years he has held the position.

In response, Čaplovič said his own assessment of himself was average and that he was not afraid of the problems the future will bring. He said he would work for the Roma even more actively than up to now, TASR reported.

According to Šarkőzy, Čaplovič presents himself on the media as someone who likes the Roma and does his best to help them, “but some of his, often very hard, statements say the opposite”. He also criticised Čaplovič for paralysing the government’s plenipotentiary for Roma communities by restricting her competencies and for increasing the number of Roma settlements where people live without electricity and drinking water.

“It’s very doubtful to what extent Čaplovič is able and competent to deal with the Roma issues,” Šarkőzy told The Slovak Spectator.

“Given all this, we are worried that the year of the Slovak presidency of the Decade will be a year of wasted chances, but after all it’s just another wasted year in the recent era,” he said.