IN SAD Janka Kráľa city park on the Petržalka bank of the Danube River history fans returned to the year 1809 to witness the great siege of Bratislava when the French army of Emperor Napoleon clashed with the Great Hungarian army at this exact site. 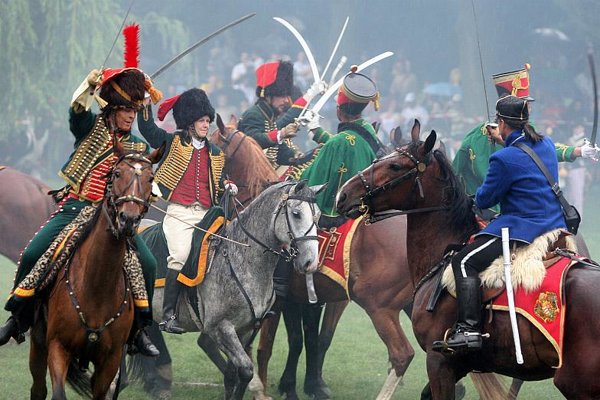 Explosions and smoke consume Petržalka in the re-enactment of the great siege of 1809 (Source: TASR)
Font size:A-|A+  Comments disabled

IN SAD Janka Kráľa city park on the Petržalka bank of the Danube River history fans returned to the year 1809 to witness the great siege of Bratislava when the French army of Emperor Napoleon clashed with the Great Hungarian army at this exact site.

About 1,500 people watched the re-enactment of the battle on June 27 and almost 10,000 people examined the battle camps, the camp life, armaments, replicas of historical arms, cannons, and the period clothing donned by 270 performers. In addition to Slovaks, there were Czechs, Austrians, French and Dutch nationals represented in the other armies.
The spokesman for Petržalka, Ľubomír Andrássy, told the SITA newswire that “all visitors enjoyed this event, especially as it was re-enacted on the exact site of the original battle.” The whole event, called We Defended Ourselves, shows various aspects of life during this period as well as army training and horse-mounted cavalry. Andrássy said the visitors showed great interest in the field hospital where they could learn how wounded soldiers were treated and how surgeries and leg or arm amputations were performed.

At about 16:00 the actual re-enactment of the battle itself started, introduced by Petržalka mayor Milan Ftáčnik and then by historian Vladimír Tomčík. After having collected their “wounded and the dead”, the armies returned to their tents and at 21:00 the bombardment of the city began. In the original battle, Napoleon’s army damaged the castle and also more than a hundred houses in Bratislava but fortunately, there was no substantial damage. The original siege lasted for more than a month but the re-enactment was condensed into one day.

The weather was so bad on June 27 that for some time it seemed that the battle would need to be cancelled or relocated from the embankment because of the rising water level of the Danube. Smoke and cannon explosions could be seen and felt everywhere in Sad Janka Kráľa, the oldest town park in central Europe. “In reality, Bratislava, then called Pressburg or Pozsony, was never conquered,” Tomčík told the ČTK newswire, "because a ceasefire was signed between Austria and France."