Cultural links with Germany are strong

THANKS to the geographical closeness of Slovakia to German-speaking countries, Germany as well as Austria, many Slovaks speak German and the exchange of cultures is vibrant and intense. In Slovakia, the biggest promoter of the German language and German culture in the broadest sense of the word is the Goethe Institute. 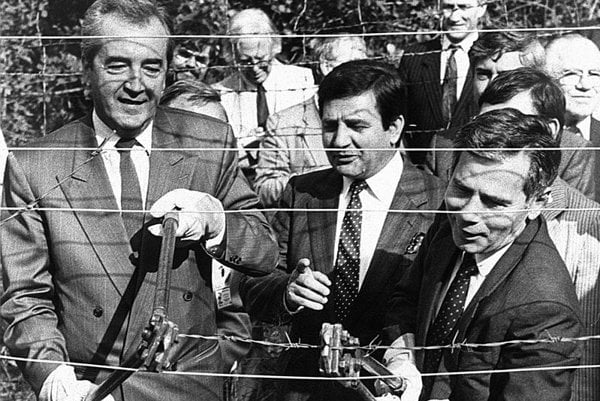 THANKS to the geographical closeness of Slovakia to German-speaking countries, Germany as well as Austria, many Slovaks speak German and the exchange of cultures is vibrant and intense. In Slovakia, the biggest promoter of the German language and German culture in the broadest sense of the word is the Goethe Institute.

“We promote study of the German language abroad and encourage international cultural exchange,” Wolfgang Franz, the director of the Goethe Institute in Bratislava told The Slovak Spectator. “We also promote knowledge about Germany by providing information on its culture, society and politics. With our network of Goethe Institutes, Goethe Centres, cultural societies, reading rooms and exam and language learning centres we have played a central role in the cultural and educational policies of Germany for over 50 years.”

In Slovakia, the Goethe Institute operates in Bratislava and cooperates intensively with the German Libraries in the State Scientific Library in both Košice and Banská Bystrica and in the worldwide programme “Schools – Partners for the Future” with the Gymnasiums P. O. Hviezdoslava in Dolný Kubín and F. Švantnera in Nová Baňa.

Since March 2008 the Goethe Institute has been a member of the EUNIC-cluster Slovakia. EUNIC is a partnership of national cultural institutions engaged beyond their national borders. In Slovakia it has 15 members: cultural institutes and cultural departments of the embassies of Austria, Bulgaria, the Czech Republic, France, Germany, Great Britain, Hungary, Ireland, Italy, Netherlands, Poland, Portugal, Slovenia and Spain.

“Together we promote cultural diversity and understanding between European societies and strengthen international dialogue and co-operation with countries outside of Europe,” said Franz. “One example of a EUNIC activity is the Language Café: come to the Café Studio on Laurinská Street on the first Wednesday of the month and talk in your favourite language.”

Apart from people who are generally interested in Germany – for example learning to speak German is very popular and many have recognised that you can earn money by knowing German – enthusiasts of film, art, theatre or literature are also interested in German productions in each field, according to Franz.

“So we continue to cooperate with the Slovak organisers and take part in well-known events like the festival of contemporary classical music Melos Ethos, the theatre festival Divadelná Nitra, the festival of poetry Ars Poetica, the documentary film festival One World, to mention just a few examples.”

This year the Goethe Institute in Slovakia is putting an accent on the 20 years since the fall of the Iron Curtain.

“Recently there was a big event with music, lectures and an exhibition on SNP square in Bratislava,” said Franz.

That event, held between June 19 and 21, was 20 Years of Freedom: Germany Says “Danke”. Organised by the Germany’s Federal Foreign Office and the German Embassy in Bratislava in cooperation with other partners, its aim was to foster a dialogue on the momentous events of 1989 with both German perspectives and the views of citizens of Slovakia.

“We will continue in the autumn with a programme about the suppression of society by the secret police with an exhibition and lectures in collaboration with The Office of the Federal Commissioner (BStU) for the records of the German Ministry for State Security and its Slovak counterpart, the Nation’s Memory Institute (ÚPN),” said Franz.

For an underground view of the fall of the Berlin Wall Franz says the Goethe Institute is proud to present the comic “Escape from Berlin” which they have translated into Slovak and plan to publish.

More artistic aspects of the political changes over the past 20 years will be discussed in a conference and exhibition called “Women Speak: 20 Years after the Fall of the Wall” in which women artists will discuss their hopes and fears and how these social transformations have impacted their life journeys both as women and as artists.

Together with colleagues from the Polish Institute, Slovakia’s Goethe Institute will present the artist and writer Günter Grass as a symbol of mutual understanding even during the cold war with a screening of films, a conference and an exhibition of Grass’ drawings.

As a cultural focus point, the Goethe Institute is also contributing to the exchange of viewpoints and opinions about climate change, which is a subject of concern to everyone.

“We organised – together with our friends from the German-Slovak Chamber of Commerce, the Friedrich-Ebert-Stiftung and the Heinrich-Böll-Stiftung – a dinner debate about Energy and Climate-Safety,”
said Franz. “In the same context, artists from Slovakia, Germany and the Czech Republic manifested their points of view by constructing three huts within the exhibition Danubian Dreams.”

German Markus Hansen was one of the European architects and designers invited to create his own ‘shed’ in the project named Danubian Dreams which re-examined the idea of the hut as the first habitat of mankind and re-proposed this notion as a way to live in the 21st century.

Along with Hansen, Czech Olgoj Chorchoj and Slovakia’s ComuniStar developed new concepts related to necessity and uncertainty as part of the second edition of Danubian Dreams. Their creations: Crisis Cabin, a Shelter for Survival and Sweet Home are on display in the Gandy Gallery in Bratislava until July 30.

Other recent prominent events featuring German artists was last year’s Month of Photography in which Thomas Hoepker, a world-renowned German photographer, arrived in person to launch his retrospective exhibition of photos from 1955 to 2008 in the Slovak National Gallery.

And the Central European House of Photography (SEDF) in Bratislava is holding an exhibition of photos by Slovak photographer Pavol Oszvald (1900 - 1968), who worked in 1925 and 1926 in the German film company Universum-Film AG (UFA).

There he cooperated on three silent movies which have become classics of the German cinema: Metropolis by Fritz Lange; Faust by Friedrich Wilhelm Murnau; and Varieté by E.A. Dupont.

His photographs impressively capture the atmosphere in the studios during the shooting of the films and are on display until the end of July.

Slovakia has also joined the world-wide celebrations marking the 250th anniversary of the death of Georg Friedrich Händel and has been holding a number of concerts featuring works of this renowned baroque composer.

Among other scheduled events, Winfried Lichtscheidel will play works by J. Alain, C. Franck and Ch. M. Widor on August 23 in Kremnica within the Kremnica Castle Organ festival.

German and Slovak archaeologists are also researching a unique settlement from the Bronze Age close to the western Slovak town of Vráble this summer.

This large international project in the locality known as Fidvár should fetch new information about how society operated in the Bronze Age, the SITA newswire wrote.

According to Matej Ruttkay, the director of the Archaeological Institute at the Slovak Academy of Sciences, an intact fortified settlement has been found there. The archaeologists hypothesise that this settlement was one of the centres of bronze distribution for the whole of Europe.

This year the Slovak institute will be financing the research and the German colleagues will cover it for the next five years.

“Colleagues from the German Archaeological Institute are conducting this research along with us as one of the main projects of German archaeology,” Ruttkay told SITA. Findings from this site will be a contribution not only for Slovakia but for all of Europe.

During the first half of June he toured four German towns to promote the German translation of his latest novel, Eskorta. This is his second book already translated and published in Germany.

He has been managing to establish himself in Germany as one of only a few well-known contemporary Slovak authors, the Sme daily wrote.

Some years ago he received a prestigious scholarship to the Literary Colloquium in Berlin and he regularly holds personal appearances at book festivals as well as writes essays about Slovakia for German newspapers.

For the first time in history, Slovaks exhibited their works at the international design festival DMY in Berlin in early June, one of the most prestigious design events throughout Europe, Sme wrote.

At the seventh edition of the DMY they exhibited a display with lights from a bar in the Slovak town of Skalica, carafes from Lednické Rovne as well as a whole street from Bratislava.

In total, Slovak architects, designers, studios and students presented over one hundred works in Berlin stemming from Slovakia’s national competition INTERIOR.sk.05/07 – best of the best.