The sweet sounds of Čičmany

About 50 shepherds’ musical instruments, including whistles, bagpipes, and fujaras (Slovak long pipes), can currently be viewed by visitors to the Raden House in the village of Čičmany, which hosts a permanent exhibition of Žilina’s Považie Museum. 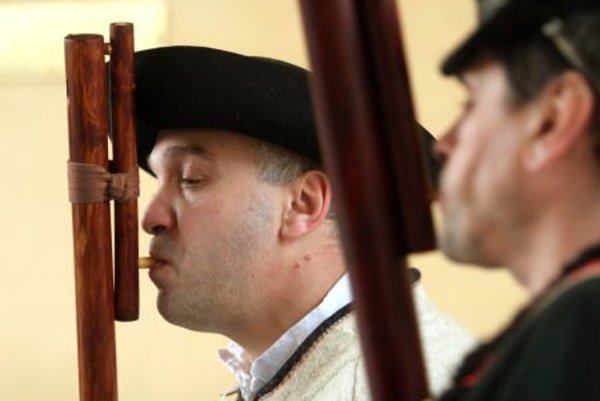 About 50 shepherds’ musical instruments, including whistles, bagpipes, and fujaras (Slovak long pipes), can currently be viewed by visitors to the Raden House in the village of Čičmany, which hosts a permanent exhibition of Žilina’s Považie Museum.

The fujara of the doyen of Slovak fujara players, Martin Sanitrár, which is part of the private collection of Ľubomír Párička, will also be on show.

The exhibition, Shepherds’ Musical Instruments from Central Slovakia, opened to the public on July 3. The idea for it came from Michal Filo and Juraj Kudjak, members of the Association of Slovak Fujara Players. It was in part thanks to the efforts of their organisation that the fujara was recorded on UNESCO’s list of Masterpieces of the Oral and Intangible Heritage of Humanity.

“The aim of the exhibition is to revive the idea of shepherds and pastoralism in Čičmany, where 13 sheep folds and chalets used to exist. Last but not least, a space has been made for regular meetings of Slovak fujara players,” Juraj Kudjak said. At the opening night on Friday, July 3, the Javorinka folklore group from Čičmany performed, and fujara players presented shepherds’ songs near Gegor’s barn. Visitors and audience members could also taste traditional products made from sheep’s cheese.

“The exhibition opens the Cultural Summer in Čičmany, followed by weekend events entitled Crafts and Folklore; the highlight will be the fourth year of the national meeting of Slovak fujara players,” Kudjak added. He said that through these initiatives they were trying to enrich and revive tourism in the village of Čičmany.

The village is the highest in Žilina District. It was first mentioned in 1272, and is well-known for its ancient and unique architecture, most notably its painted frame-houses. To preserve them, the lower part of the village was made a folk architecture reserve in 1977.