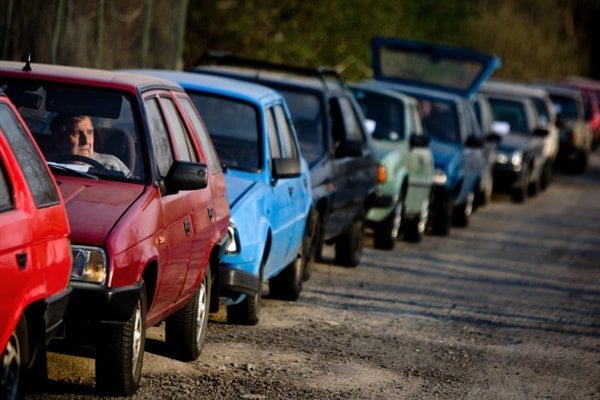 The main reason was the car-scrapping bonus, which the government of Robert Fico implemented earlier this year to revive the local automotive industry and rejuvenate Slovakia’s fleet of passenger cars. It pushed car sales up during the first half of 2009 as Slovaks used the bonus to purchase 20,000 new cars.

“In terms of the effect of the car-scrapping bonus on car sales and registration of new passenger cars, we can say that these will this year be at the level of 2008,” Mária Nováková, the secretary general of the Automotive Industry Association of the Slovak Republic (ZAP), told The Slovak Spectator. “And when we speak about last year, we have to note that that year car sales were at their highest in the 15-year existence of car sales statistics, with total sales of 70,040 passenger cars.”

The bonus, however, does not enjoy universal approval. While the Slovak Economy Ministry as well as ZAP see the car-scrapping bonus as a tool to propel the automotive industry and positively influence other segments of Slovakia’s economy, the Institute of Economic and Social Studies (INESS), an economics think tank, believes that the bonus has had only a minimal impact on the local car industry and that the measure has diverted funds from other industrial branches.

The Fico government launched the first wave of the car-scrapping bonus in early March. The basic car-scrapping bonus paid by the state was €1,000; if the new car seller reduced the sale price by another €500, the state increased its contribution to €1,500. Thus the car-scrapping bonus could generate a total discount for buyers of €2,000. The bonus applied only to cars with a regular sale price of less than €25,000. And the car being scrapped had to be more than 10 years old and registered in Slovakia no later than December 31, 2008. The government allocated a total of €33.2 million to the project.

Under the scheme, when a car owner brought an old vehicle to an authorised car-scrapping yard he received a document which he then submitted to the seller of a new car. It authorised him to receive the bonus, which the car seller then obtained from the state.

While ZAP, which records car sales in Slovakia as well as take-up of the bonus, predicted based on its experience that it would take months to use up the allocation, it took the car-buying public only 13 working days to deliver 22,100 old cars to scrapping yards and qualify for all the bonuses.

“It was an ongoing frenzy which meant that scrapyards were bursting,” Nováková, ZAP’s secretary general, told The Slovak Spectator. “Their staffs were working in two shifts, there were queues and timed appointments to deliver a car to a scrapyard.”

After the scrapping bonus had turned out to be so popular, the government launched a second wave in April. The conditions for car owners to qualify for the bonus remained the same, but car-sellers had to contribute more: €1,000 per new car in order for the car buyer to get the state bonus of €1,000. The government allocated a total of €22.1 million for the second wave.

The second wave was as popular as the first one, and the allocated funds were used up after only five working days, ending on April 14. Old car owners arriving after April 14 could not qualify for the bonus; but the lucky bonus holders can use their bonus up to the end of this year.

In total, the Slovak government allocated €55 million to the car-scrapping bonus project, to subsidise the purchase of 44,200 new cars. At the end of June, the number of cars purchased or ordered using the bonus amounted to 35,897 units, of which around 20,000 were delivered in the first half of 2009, according to information provided by the Economy Ministry. That leaves 8,303 bonuses still to be used.

Effects of the bonus

Apart from the aims of reviving the local car industry and renewing Slovakia’s car fleet, implementing the bonus scheme was also a gesture of solidarity with other European countries with strong automotive industries.

“Twelve EU countries including Slovakia have supported car sales by the use of scrapping bonuses,” Dárius Bošjak from the communication department of the Economy Ministry told The Slovak Spectator. “With regards to the fact that cars produced in Slovakia are global makes, it is necessary to evaluate the support to sales within the whole of Europe. Measures to combat the impacts of the crisis in the EU respect the importance of the automotive industry, which by the number of jobs it supports, investment in research and development, turnover, as well as interconnection with other sectors creates one of the pillars of the current European economy.”

The car industry in Europe directly employs 2.2 million people, but indirectly supports about 12 million jobs. The annual turnover of the European automotive industry is €780 billion and the value-added tax receipts from it exceed €140 billion, according to Bošjak.

Nováková of ZAP shares the opinion that implementing the scheme has gained Slovakia international respect.

Nováková also thinks the decision by Volkswagen to invest €308 million in its Bratislava plant to produce the new Up! model confirms this.

“Apart from the adoption of the European single currency as of January 1, 2009, Slovakia was also positively assessed for joining the whole of Europe’s efforts to fight the crisis and for its support to the car industry,” said Nováková. “This [the scrapping bonus] was one of the facts which influenced the decision about this investment, which Bratislava needs so much. This is because during a crisis sales of the more expensive models which are [currently] produced by Volkswagen Slovakia in particular are limited.”

The automotive industry is the biggest segment of the Slovak economy, according to Bošjak. He said it is of key importance for the development of GDP, exports, employment, attracting investment and overall qualitative changes in industry expressed in terms of high quality, productivity, innovations and high technology. Sub-contractors play a key role in production, and technological and regional diversification, with positive impacts on employment and the development of small and medium-sized businesses, he added.

Nováková of ZAP said the biggest impact of the bonus scheme in Slovakia was on the subcontractors which supply components not only to Slovakia’s car industry but to the whole European industry.

But Richard Ďurana, director of the Institute of Economic and Social Studies (INESS), an economics think tank, is critical of the car-scrapping bonus scheme.

“The car-scrapping bonus had only a minimal impact on the local automotive industry; it had a positive impact in particular on car sellers, who were behind its implementation,” Ďurana told The Slovak Spectator. “However, it is impossible to speak about a positive impact in the case of the whole of Slovak industry. The support to one selected industrial branch has diverted funds from other branches, which were hit by this measure because customers delivered their savings to car sellers. Moreover, politicians, by introducing this bonus, motivated people in a time of crisis to spend their savings and even to go into debt.”

“This age structure means that these are people who we cannot describe as daredevils,” she said, adding that they are instead people who think through the purchase of a new car thoroughly and belong to a generation which is used to living without loans.

Sub: The contribution of the bonus to economic growth

The National Bank of Slovakia (NBS) has calculated that the direct effect of the car-scrapping bonus project on the growth of gross domestic product (GDP) is about 0.05 percentage points, the TASR newswire reported.

By Ďurana said it is too early to calculate the impact of the bonus on economic growth.

“This is because the bonus has concentrated some of the car sales for the whole year into three months.” Ďurana said. “Thus it will be possible to estimate the impact of the bonus only at the end of the year, when the calculation will also include the expected drop in car sales during the second half of the year.”

However, according to Ďurana, even that estimate will be of only limited value since it is impossible to say how many cars would have been sold without the support of the car-scrapping bonus.

One of the objectives of the car-scrapping bonus was to rejuvenate Slovakia’s fleet of passenger cars.

According to Nováková, the average age of a passenger car in Slovakia is more than 14 years.

According to the ZAP database, the average age of cars brought for scrapping within the bonus scheme exceeded 19 years.

Nováková believes that the replacement of old vehicles with new ones, which are safer, more effective as well as more environmentally friendly, will have positive impacts on road safety as well as the country’s environment.

Among other effects which Nováková said the bonus scheme has brought are the restoration of consumer confidence and the flow of finance.

“The financial crisis is also caused by the missing flow of finance and thus by supporting the confidence of customers to purchase a certain product, the flow of money has been re- started,” said Nováková.