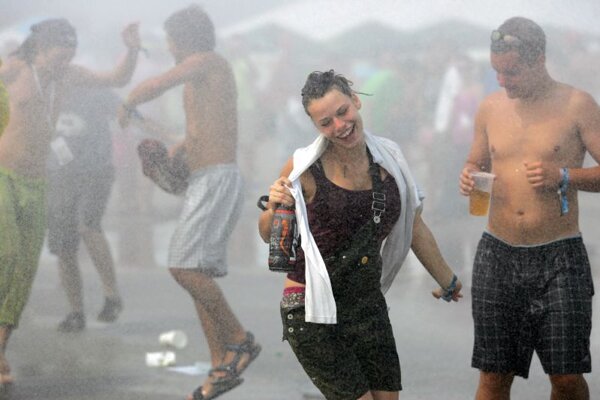 This brief exchange explains the meaning of one of the most widely-used Slovak words much better than “well-being”, “ease”, “peace” or any of the other dictionary translations of “pohoda”.

The Pohoda summer festival has become one of the main social and cultural events in Slovakia. But it is not only the music, the theatre, or the debates that make it interesting. For three days an airfield near the city of Trenčín turns into a model of Slovakia as it could be. What makes this microcosm in many respects better than Slovak society as a whole?

1. Diversity. Slovakia is a country so small that in many areas even the mainstream has trouble surviving – that’s why all major radio stations play the same music or why there is really just one serious daily newspaper. Small Slovak cities are home to very few subcultures. And the country as a whole is not very tolerant to minorities. A mix of a tiny market and an often not-too-self-confident national identity leaves little room for diversity in business, fashion, or opinion. But at Pohoda, hosting a mix of local and foreign pop stars and indie bands, diversity is celebrated.

2. No liquor is sold. Perhaps drinking has not caused as much damage in Slovakia as in some countries further to the east where vodka-based depression, fatalism, apathy and aggression have for decades shaped public life. Yet the drinking excesses of Ján Slota, head of the coalition SNS party and one of the most powerful men in the country, is only tolerated because many voters approve of those excesses, and the others don’t mind. Sure, it is possible to get drunk unconscious just by drinking the 10-degree beer sold at Pohoda, or you can bring your own drink, but motionless bodies of fifteen-year-old punk rockers or axe-waving drunkards are not a common sight.

3. Decent services. Whether you visit a posh cocktail bar in the middle of Košice or a local pub in the Tatras, the treatment you get is likely to be horrific. If you call a plumber in Bratislava, he will usually come three hours late, charge you an absurd amount and say he has to come again later. At Pohoda, there are queues and you can overpay for food or drink if you’re not careful. But the overall impression is of a place where the organizers are actually trying to satisfy their visitors – there are enough toilets and bodyguards are not instructed to knock your brains out with just the slightest excuse.

4. Tradition. Over 13 years, Pohoda has worked itself up from a small festival with a few hundred visitors to a mega event with over twenty-thousand visitors. That is a rare story. Many festivals find a big sponsor, get big overnight and end after a year or two. Many Slovak “businessmen” get rich fast by siphoning large sums from public funds. The local judiciary is in a terrible state because there is little tradition of just decision-making and saying “no” to political power. If you don’t count the more-or-less emptied rituals of Christmas and Easter, Slovakia terribly lacks traditions and the good things that go with them.

5. Values. Pohoda’s founder and head organizer Michal Kaščák, himself a former musician, has never been just an entertainer. Under Communism, under the authoritarian Vladimír Mečiar, and up until today, Kaščák has always stood on the side of decency, justice and common sense. And you can feel it in the things he does. At his festival, you meet people that share those values.

For all these reasons there is hardly a better way of understanding what “Pohoda” means than visiting it in person.