ARCHAEOLOGISTS have found traces of what could once have been the residence of a Vandal king. The stone construction of the tile and mortar remnants indicates that the structure was probably built by the Romans more than 1,600 years ago. 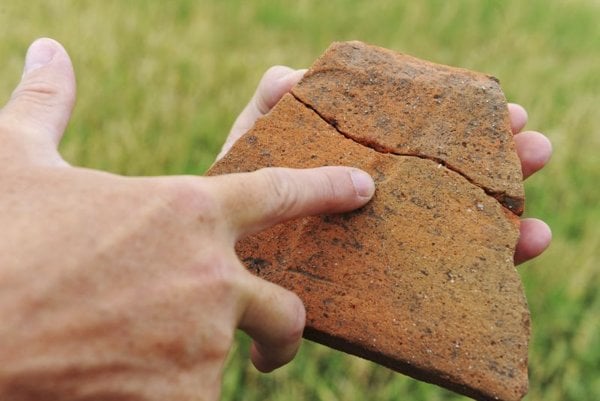 ARCHAEOLOGISTS have found traces of what could once have been the residence of a Vandal king. The stone construction of the tile and mortar remnants indicates that the structure was probably built by the Romans more than 1,600 years ago.

Archaeologist Marián Vizdal told the ČTK newswire on July 8 that if the hypotheses are confirmed, it will make this find the most northern ancient Roman construction site in central Europe. The find is located near the village of Rožňany in eastern Slovakia.

“So far, we have found Roman roofing tiles and pottery,” Vizdal said. “We estimate the dates of the excavations to be somewhere between the 3rd and 4th centuries.”

The heavy tiles indicating a massive stone construction must have existed on this site. Vandals, a nomadic people from eastern Germany, were not skilled in complex construction technologies needed to fabricate roofing tiles or to build walls with mortar, Vizdal said.

“The site could resemble provincial residences of the later Roman period,” Vizdal hypothesized. However, he said that he could only guess as to why the Romans would build such a residence for a foreign king, hundreds of kilometres away from their territory. Vizdal surmised that the Vandal king might have been loyal to the Roman Empire and safeguarded a trade route to regions to the north. Or he could have been a military ally.

According to another archaeologist, Anton Karabinoš, the structure could have indicated simply an adaptation to a more civilized lifestyle. Karabinoš surmised that the find might be connected to an earlier discovery of a rich grave in the nearby village of Ostrovany.

The grave, discovered in the 18th century, contained golden decorations, glass vessels, and other exotic items and was originally thought to have been one of a series of burial sites of old German chiefs.

This most recent research, however, opens the possibility that this grave could be the single grave of the Vandal king.

Archaeologists intend to continue their research in this area until next spring.