THE BRITISH ambassador to Slovakia, Michael Roberts, spent an afternoon at the Bratislava Zoo on July 10. 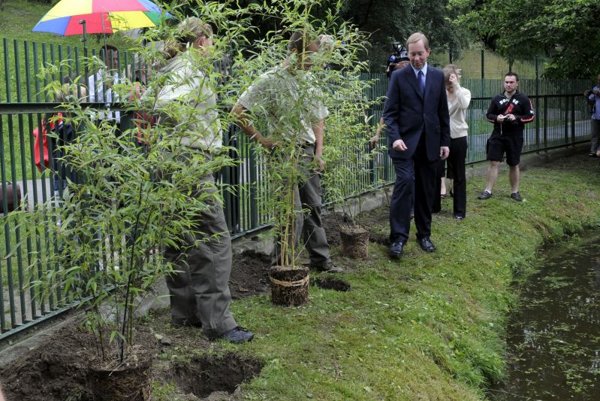 THE BRITISH ambassador to Slovakia, Michael Roberts, spent an afternoon at the Bratislava Zoo on July 10.

The main thrust of the ambassador’s visit was to supervise, along with zoo manager Miroslava Šavelová, the planting of six bamboo plants donated by the British embassy. The plantings were made near the artificial lake that is the well-known habitat for the zoo’s flamingos.

The choice of bamboo was no accident according to Ambassador Roberts. He noted that the plants produce much more oxygen than the other trees growing in the area and also will act as “a carbon dioxide absorber” thus contributing to the reduction of global warming.

Ambassador Roberts braved the rainy weather and brushed away the recent surge in the local mosquito population as he took the time to inspect almost the entire zoo. He was attracted especially to the cats, mainly the white tigers, the chimpanzees and the bears.

Roberts later confessed to the TASR newswire that as a child he frequently visited London Zoo where his favourite animals were the giraffes.

He said he enjoyed gentle animals more than animals that he fears such as snakes and crocodiles. The Ambassador is also interested in animal ethology, the study of behaviour patterns between humans and animals and animals themselves. He sees one of the key roles of zoos as educating the public about interactions between the environment and nature.

When asked whether in this high-tech age, it still makes sense to take children to zoos, he answered that such an experience is positive in that it promotes children’s fantasy and imagination and it represents the best way for urban children to learn about the environment.

The British embassy, in cooperation with Bratislava Zoo, is part of the fight to stop climate change. The embassy also supports the Bratislava Zoo with funds from a collection made during the June celebrations of the Queen’s birthday. Three more plants were donated by Kulla garden centre.