HORSES seem to be regarded as somewhat crazy by English- and Slovak-speakers alike. “Horsing around” finds its local near-equivalent in a noun describing anything that is wacky, mad, or just plain stupid – “konina”, “a horsing”. 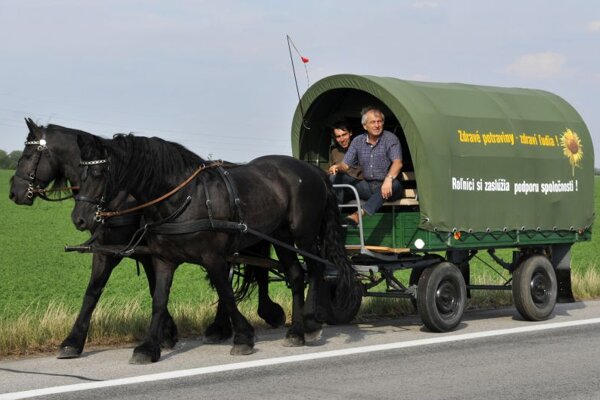 HORSES seem to be regarded as somewhat crazy by English- and Slovak-speakers alike. “Horsing around” finds its local near-equivalent in a noun describing anything that is wacky, mad, or just plain stupid – “konina”, “a horsing”.

One man who’s not been afraid to take his horses out, literally and figuratively, is Agriculture Minister Stanislav Becík.

The HZDS nominee started his summer charm offensive by issuing a “message to the Slovak nation”. In the form of a poem. No translation could ever match the geniality of the original, but foreigners should not be entirely spared this exquisite experience:


The farmers are a tree of green,
Which in tough soil planted has been.

Branches are ripe with buzzing bees,
Flowers will fruit, as each eye sees.
In the whole world, farmers are best,
No other caste can pass the test.
The farmer ploughs, sows, digs, and plants

Protected by the Lord’s strong hands.
The farmer loves the cherished field
He walks with pride, all his wounds healed.

In his struggles, he takes no rest,
God blesses him for zeal and zest.
Farmers’ labour feeds all mankind
That wonder see even the blind.
Their work ends by harvests of gold
Pillars of state, our weight they hold.
Please, Lord, protect, bless for all days,

So your people have enough bread
And find heaven, once they are dead.
In the whole world, farmers are best,
No other caste can pass the test,
Keep them always in deep respect,
Your gratitude never defect.

While it is clear the aesthetic qualities of the Slovak version can never be fully reproduced, hopefully no important idea has been lost in translation.

In response to journalists' questions Becík said the poem was not his, claiming he only found it in an old calendar and just adjusted it slightly to fit modern times. Well done.

A day after releasing what was likely his literary debut, Becík took a pair of horses and set out on a wild agricultural road trip through the Slovak country-side, leaving commentators bewildered.

Is Becík, who has throughout his few months in office been mostly invisible, a political genius?

Is this an organised effort by the Vladimír Mečiar's HZDS to regain some of its lost glory and prevent the country’s once strongest party from dropping out of parliament after next year’s elections?

Or does Becík just really have a deep passion for bad poetry and good horses?

We may never know. But one thing is certain. It is rare to see a bigger konina.