ITALY and Slovakia have a long and cherished tradition of economic cooperation. While there are a number of Italian investors with large investments in energy and finance in Slovakia, the small and medium-sized enterprise (SME) segment still offers untapped opportunities for cooperation. 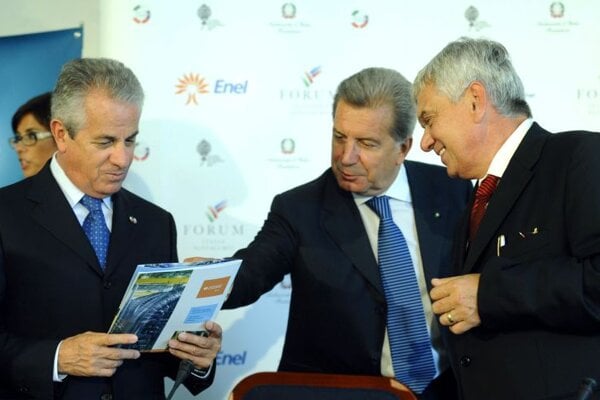 ITALY and Slovakia have a long and cherished tradition of economic cooperation. While there are a number of Italian investors with large investments in energy and finance in Slovakia, the small and medium-sized enterprise (SME) segment still offers untapped opportunities for cooperation.

“I would say that economic cooperation between Slovakia and Italy is at an excellent level,” Alessandro Villa, the secretary general of the Italian-Slovak Chamber of Commerce, told The Slovak Spectator. “The recent visit of Italian Minister of Economic Development Claudio Scajola to Slovakia has proved this again.”

Attending the first economic cooperation forum between Italy and Slovakia, the Italian minister met Slovak Economy Minister Ľubomír Jahnátek in Bratislava on July 14 to pave the way for even more intensive cooperation.

Minister Scajola said at the opening ceremony that during the past 10 years bilateral trade between Italy and Slovakia tripled, from €1.9 billion in 1999 to €4.5 billion in 2008. For Slovakia, Italy is the ninth largest export market, the sixth largest importer and the third biggest investor, with investments totalling €3.6 billion, Villa said, citing statistics from Minister Scajola. The trend has been positive and this is why both countries want to continue their efforts so that growth does not slow.

Italy’s goals in Slovakia are quite ambitious: during the next three to four years it wants to become the fourth or fifth most important trading partner for Slovakia, the Italian minister said at the forum.

During his visit the Italian minister also met with representatives of about 400 Italian companies active in Slovakia at a dinner hosted by the Italian-Slovak Chamber of Commerce. He reiterated at the dinner that the Italian government has a great interest in this region of Europe and asked the participants to make even stronger efforts and to utilise the still vastly untapped opportunities offered by Slovakia.

In spite of the excellent level of cooperation so far between Italy and Slovakia, Villa said there are some barriers which should be removed to create further space for development.


He said Italians would welcome simpler and more transparent access to EU funds and public tenders which would enable Italian businesses to utilise their competitive advantages, such as current competencies or other high-quality criteria.

“Furthermore, the rhetoric of the Slovak government is in the direction of protection of its priorities and strategic interests,” Villa said. “This often means arguing in favour of regulation and control of the market in certain strategic sectors. Such tactics are fully legitimate, but it puts into conflict national interests and the interests of the market. Thus it creates a not very favourable climate for investors.”

“Italy may play an important role during the consolidation and organisation of the small and medium-sized producers’ segment in Slovakia, on the basis of the Italian model,” said Villa.

In Italy, production is organised in clusters and industrial parks according to industrial branches. This system of well-organised ‘guilds’ and consortia increases competitiveness and facilitates the process of innovation. The system is very strong in Italy thanks to its excellent organisation, which has resulted from a long process of consolidation.

“Small and medium-sized companies – SMEs – offer the biggest space for deepening of the economic cooperation between Italy and Slovakia,” said Villa. “The SME segment in Slovakia is extensive, but due to the fast growth of the last few years it is still little organised.”

For now, there are no examples of Italian-style organisations of SMEs in Slovakia.

“But we would like to share this experience with Slovak businessmen and help during the consolidation of the SME segment within the Slovak economy,” said Villa.

“I am convinced that in spite of the current economic downturn Slovakia is a suitable and attractive destination for foreign investors,” said Villa. “Italian businessmen see Slovakia in a similar way and thus their interest in this country is not decreasing. They realise that Slovakia has several features which are very decisive for direct foreign investment. It has an excellent location within the European Union, a highly-qualified labour force with the abilities required – in particular in the manufacturing industry – a favourable tax system and, last but not least, political stability.”

With regards to the crisis, nobody is having an easy time and this is also the case for Italian businessmen in Slovakia.

To the contrary, their goal is to do long-term business and establish continuity, according to Villa.

What has changed, also under the influence of the economic crisis, is that Italian investors less and less arrive in Slovakia only to make one-off deals.


Potential for the future

The energy industry is certainly the area which Villa considers to have the greatest potential for future cooperation.

“The aim of Enel, which is the majority owner of Slovak power producer Slovenské Elektrárne, is to strengthen its position as the leader in the electricity production market in this region,” said Villa. Enel plans to invest €2.7 billion by 2013 in the completion of the nuclear power station in Mochovce. After completion, Mochovce should provide more than half of Slovakia's electricity consumption.

Villa sees the launch of an Italian-Slovak consortium for the energy industry to support bilateral cooperation in this segment as a very positive signal.

“The target of the consortium is the injection of Slovak-Italian capacities and know-how into the completion of the third and fourth blocks of the nuclear power station in Mochovce, creating a ‘centre of excellence’ for nuclear energy,” said Villa. This should create, for the companies involved, opportunities to utilise their skills in other nuclear projects in other regions, for example in Romania and Bulgaria.

“The Italian-Slovak Chamber of Commerce has become a partner for Slovakia within the EU project PVs [PhotoVoltaics] in BLOOM,” said Villa. “The project focuses on usage of smaller aggregates using solar panels, with an output of between 50kWp and 2-3MWp. The aim of this project is to harness solar energy, increase knowledge among the public and the business community about renewable energy, and facilitate processes and strategies supporting the construction of photovoltaic fields.”

Among members of the Italian-Slovak Chamber of Commerce, there are also companies utilising, in the Slovak market, their long-term experience and know-how in the construction and introduction of technologies for producing energy biomass or geothermal energy.

“Introduction of renewable energy resources is among the EU’s priorities and thus I think that it is necessary to support this opportunity,” said Villa.

Slovakia’s adoption of the European single currency, the euro, at the beginning of 2009, has had a large influence on economic cooperation between Slovakia and Italy.

“The guarantee of stability is the main and the most important benefit,” said Villa. “The introduction of the euro in Slovakia has prevented problems which Italian businessmen encounter in Hungary, Ukraine or Poland. The economic crisis and unexpected changes on world financial markets have been reflected in particular in the development of national currencies of smaller economies, and actually the instability of their currencies has caused problems in the foreign trade of these countries.

“The economic stability which the introduction of the euro in Slovakia has brought is very important during times of crisis.”