Italian culture is ubiquitous in Slovakia

ITALIAN culture is rich and broad and that is why the participation of Italian artists is almost automatic at most festivals and events presenting visual arts, cinematography, classical music, photography, literature or architecture in Slovakia. 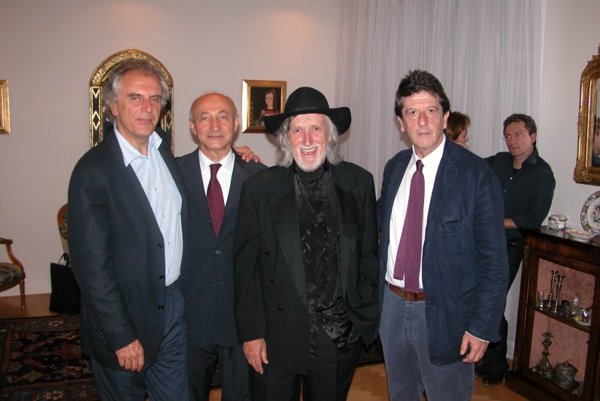 ITALIAN culture is rich and broad and that is why the participation of Italian artists is almost automatic at most festivals and events presenting visual arts, cinematography, classical music, photography, literature or architecture in Slovakia.

“It is necessary to highlight the fact that Slovaks have always been interested in Italian culture and have also had the courage to support initiatives which did not reflect only the traditional cultural panorama but also its modern and avant-garde facets, particularly within the theatre,” Marco Gerbi from the Italian Cultural Institute (IIC) told The Slovak Spectator.
Bratislava in June largely belonged to Italian culture as the second year of the Dolce Vitaj festival, whose name is an Italian-Slovak play on words, offered an extensive array of events full of Italian music, films, food and many other attractions. Adding the “j” to the Italian phrase “Dolce Vita” (the sweet life) turns it into a phrase which can be translated as “sweetly welcomed”.

“The pinnacle of the events organised by the Italian Cultural Institute was the granting of the Elsa Morante literature award during the film section, which took place in Slovakia for the first time,” Alexandra Kučmová of the Italian Cultural Institute told The Slovak Spectator. “This ceremony was attended by the chair of the jury, important contemporary Italian writer Dacia Maraini.”

The top prizes were awarded to contemporary Italian film director Marco Risi, the son of Dino Risi, an icon of Italian cinematography over several decades, and to screenwriter Andrea Purgatori for the film Fortapacs, which premiered in Italy this spring. It was first screened in Slovakia as part of Dolce Vitaj. And for the Slovaks, the prize went to prominent film director Juraj Jakubisko and translator and Italian linguist František Hruška.

The Italian Cultural Institute in Bratislava is also very proud that it could arrange the visit of the traditional Sicilian puppet theatre, Associazione Figli d’ Arte Cuticchio, led by the charismatic Mimmo Cuticchio. This prominent ensemble opened the puppet theatre festival in Bratislava and performed in Nitra as well in June.

One of the highlights of the festival has been the exhibition called Carte Futuriste (Futuristic Drawings). It has been taking place in the Slovak National Gallery and has now been extended to August 16.

This exhibition offers an original presentation on the occasion of the hundredth anniversary of Futurism (1909-2009) – the avant-garde movement starting early in the 20th century which adumbrated the dynamic and stormy destiny of a new era in culture and fine arts.

“The Dolce Vitaj festival had a very positive response,” said Gerbi. “The fact that cultural institutions and business entities in Slovakia created a project which introduces Italian culture in all its aspects and forms is in itself a remarkable outcome. But in many cases sponsors did not limit themselves to just financial support of the events; they instigated some events which interconnected Italian and Slovak culture.”

Gerbi mentioned as an example the Slovak jazz musicians who joined with Italian classical musicians to give a concert of Puccini’s compositions at Bratislava’s Main Square in the Old Town on June 29. The concert of Slovak chamber ensemble Musa Ludens also enhanced the opening of the festival and by its interpretation of various period compositions showed that music knows no frontiers and that Europeans share many roots as well as traditions, said Gerbi.

Last November, Italy was the main focus of Bratislava’s Month of Photography festival featuring such well-known photographers as Oliviero Toscani, Mario Giacomelli, Paolo Ventura and Alfonso Modonesi as well young Italian photographers at both individual and collective exhibitions.
Another outstanding event featuring Italian culture worth noting was the exhibition of the painting, Christ and the Woman Taken in Adultery, by Tintoretto, who is often called the last great painter of the Renaissance. This painting, one of Tintoretto’s best-known, was on display at the Bratislava City Gallery throughout December 2008 and until January 10 this year. The gallery borrowed the 460-year-old painting, valued at €3 million, from the Galleria Nazionale d’Arte Antica di Palazzo Barberini in Rome.
Lovers of Italian culture can look forward to autumn because the Italian Cultural Institute is preparing, for example, an exhibition of mosaics from Ravena in October. And within its Week of Italian Language the institute will introduce noteworthy Italian contemporary writer Claudio Margis to the Slovak audience through a solo theatre performance of a translation of one of his novels.

The list of upcoming events also includes another exhibition of futurism works of art in November.

“This exhibition should be a crowning moment among the several futurism events carried out so far in Slovakia,” said Kučmová. “The display will present priceless and less-often seen works by founders and renowned representatives of Futurism.”
That this exhibition will come to Bratislava can be regarded as an international success because this touring exhibition will arrive in Slovakia from Warsaw and afterwards it will move on to Lisbon. Because it consists of paintings from private collections which can be borrowed and publicly shown only occasionally and since 2009 celebrates 100 years of Futurism, Slovakia has been given a unique opportunity to be host to these precious artworks, according to Kučmová.
Learning Italian

However, for technical and organisational reasons the Italian Cultural Institute cannot extend its teaching capacities.

“So we are pleased that the number of students is more-or-less stable and does not decrease,” said Šulíková. “Maybe the target group has been changing a bit. There are more and more people who need Italian for their work.”

In general, the interest of Slovaks in the Italian language stems from a natural relation between Italian and Slovak culture because Italy has always been a popular tourist destination for Slovaks, according to Šulíková.

“But Italian capital investment is more and more present in the Slovak market and this is not a negligible role,” said Šulíková. “The activities of the Italian Cultural Institute in creating conditions for keeping in touch with present-day Italy further feed the interest of Slovaks in Italian culture.”