ARCHAEOLOGICAL research near the church of St. Nicolaus in the town of Trnava has uncovered the largest charnel house ever found in Slovakia. A charnel house, or ossuary, is a vault used to hold the bones of the dead. 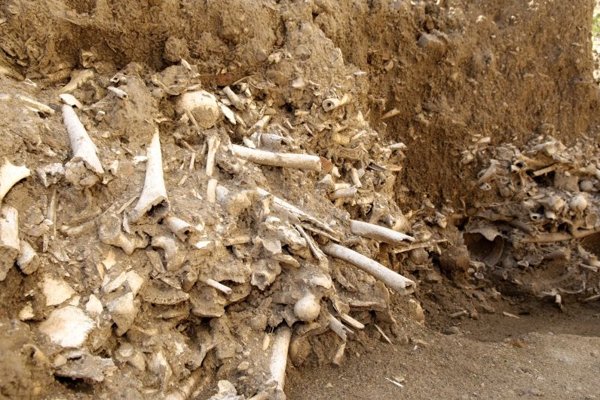 The remains of a large charnel house were uncovered near the church of St. Nicolas in Trnava. (Source: TASR)
Font size:A-|A+  Comments disabled

ARCHAEOLOGICAL research near the church of St. Nicolaus in the town of Trnava has uncovered the largest charnel house ever found in Slovakia. A charnel house, or ossuary, is a vault used to hold the bones of the dead.

The medieval charnel house in its original state was apparently a rotunda, about six and a half metres across and six metres high. Its function was two-fold. Below the ground it held the bones of the dead; above the ground it was a church.

“It is the oldest church building ever discovered in Trnava,” Erik Hrnčiarik, the chair of classical archaeology at Trnava University told a press conference on July 21. “Its foundation dates to the 11th century.” The archaeologists were able to date the rotunda from broken ceramic fragments found in the structure.

According to Hrnčiarik, it ceased to function as a church or charnel house some time around 1360. He added that the nearest similar constructions are in southern Austria.

Besides the rotunda, other important findings have been made in the area including remains of a sacristy of the Church of St. Michael as well as a 16th century graveyard. “We found 20 graves of apparently well-off Trnava inhabitants,” Hrnčiarik told the SITA newswire.

The most important finding according to Hrnčiarik is the well-preserved skull of a woman wearing a crown. Some crosses were also found, as well as a precious medallion with ivory inlays dating back to 15th century.

Following the archaeological research, art and history experts will analyse the newly discovered data. These investigations will be funded by the town of Trnava which has already allocated €17,593.

The archaeological research was begun last year as a part of a project to reconstruct the church of St. Nicolas.