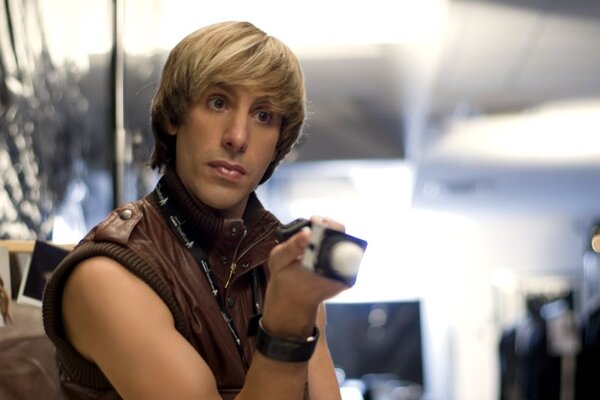 Brüno is an über-chic, über-gay, über-umlauted fashionista who recently dropped crotch-first into the face of Eminem at the MTV Movie Awards and concludes this film singing alongside Bono, Sting, Elton John, Snoop Dog and Chris Martin. He is loud, proud, frequently naked and a box-office sensation, yet Baron Cohen's point of highest visibility is also his creative nadir.

Brüno's most remarkable achievement is to make the viewer pine for the subtlety of Baron Cohen's other alter-ego, the Kazakh television presenter Borat – no mean feat when we remember that Borat was an anti-Semitic, misogynistic boor who brought a bag of his own faeces to the table at a dinner party. But in comparison with the crude dangling and wilful manipulations of Brüno, Borat is the picture of refinement and restraint.

What amounts to a formal plot in “Brüno” will be familiar to fans of “Borat”. Leaving his homeland and his television fashion show, our hero travels to America, nominally seeking mainstream acceptance but more insidiously sniffing out the potential for cultural misunderstandings and the excuse to peel back the polyester.

In keeping again with Borat (and Ali G), Brüno hoodwinks strategically-targeted “real” people into conversations and compromising situations, probing at the boundaries of decency in the hope that his stooges – Hollywood agents, mystics, Alabama hunters, swingers, the Republican congressman Ron Paul, among others – let slip their ignorance and neuroses.

The major drawback for Baron Cohen is that frequently the prey refuses to take Brüno’s bait in the way they gobbled up Borat’s and this forces his new caricature to transgress the rules of fair game. Ron Paul – who is a serious politician whatever one makes of his policies – walks out of his meeting only after Brüno has persuaded him into a hotel room and then dropped his trousers. One of the hunters loses his patience at 3.45am when a naked Brüno interrupts his sleep and asks to share a tent.

Neither of these stings reveals any particular homophobia in their victims; their hostility towards Brüno fits with someone fearing rape. Indeed, one wonders what might have been the upshot had any of the patsies been a heterosexual woman. An assault charge, presumably.

This is all the more disappointing because Baron Cohen has repeatedly proven a mastery of language, slapstick and character, as well as a sharp eye for often absurd prejudice. The discovery, for instance, of a “gay converter” (and then, even better, a “second-stage gay converter”) in the ministry of the American south represents the perfect opportunity for a cross-examination of the church’s stance on homosexuality. But Brüno squanders his chance and instead leaves us wishing someone like Louis Theroux could confront the extremists, innocently uncoiling enough rope until they are hanged.

This imperceptible cajoling, a skill even Borat possessed, is the most significant deficiency of both Brüno and “Brüno”. The Kazakh’s credulity invited the bigoted either to sign him up to their narrow-minded campaigns else gleefully high five in support of his backward conceits. But Brüno invites no one onto his side; he is an obnoxious outsider and disliking him is the only option, regardless of his sexuality.

Resultantly, if “Brüno” is supposed to be a character-comedy, then we can offer no empathy for our sole comedic entity. If it is, on the other hand, intended as a social commentary, it is on a society we do not recognise.

All is not terminally lost: Baron Cohen introduces a character late on – the aggressively heterosexual “Straight Dave” – whose brief cameo is supported by the whooping, blinkered hordes in a way that demonstrates the skills of an artful ringmaster remain. But it is too little, too late; Baron Cohen needs a rethink to rediscover his former glories because after “Brüno”, the returns from his established shtick are dangerously diminished.