EXTREMISM once again made itself visible in Slovakia when a far-right group called on its supporters to gather in Šarišské Michaľany and protest against what it called “the Gypsy terror”. In the midst of growing anti-Roma sentiment across eastern Europe, about 200 skinheads from Slovakia, the Czech Republic and Hungary responded to a call to protest in the small village in eastern Slovakia on August 8. 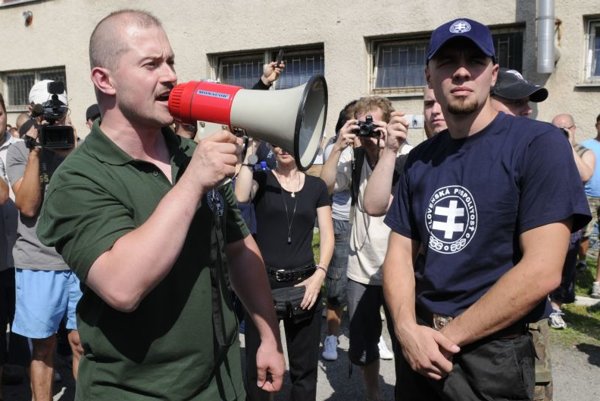 EXTREMISM once again made itself visible in Slovakia when a far-right group called on its supporters to gather in Šarišské Michaľany and protest against what it called “the Gypsy terror”. In the midst of growing anti-Roma sentiment across eastern Europe, about 200 skinheads from Slovakia, the Czech Republic and Hungary responded to a call to protest in the small village in eastern Slovakia on August 8.

What served as the extremists’ impetus was an incident in which two teenage boys from a Roma settlement allegedly beat up a 65-year-old man at the Šarišské Michaľany football stadium. Although police officers swiftly dispersed the rally with the backing of local politicians, the whole series of events has left the Roma community feeling vulnerable, not least because expressions of anti-Roma sentiment have meanwhile increased.

Following the rally, a Slovak politician suggested that the country should begin publishing statistics on crimes committed by Roma. Another extremist group, New Free Slovakia, has called a rally in Prešov in eastern Slovakia for August 14. Slovenská Pospolitosť, the group believed to have been behind the August 8 event, announced it is planning another anti-Roma rally for August 22 in Krompachy, the Sme daily reported.

The leader of Slovenská Pospolitosť, a far-right group which promotes anti-Roma policies, said the country needs a new nationalist party to defend its interests and attacked the Slovak National Party - currently a junior partner in the ruling coalition - saying that it is not doing its job properly. Observers say the support that the extremists received from local residents of Šarišské Michaľany is disturbing but somewhat understandable because the government has failed to effectively address long-standing problems within the Roma community.

SLOVAK police quickly dispersed a protest rally convened by the ultra-right civic organisation, Slovenská Pospolitosť, in Šarišské Michaľany on August 8. Local politicians approved of the police action against the protesters and Interior Minister Robert Kaliňák said if necessary the police will take action against extremists whenever they violate the law.

The previous weekend a 65-year-old man was seriously assulted at the local football stadium. The assailants, allegedly two teenage boys from a Roma settlement, caused life-threatening injuries and the man’s recovery is expected to take a month and a half. The police have detained the alleged assailants, the SITA newswire reported.

About 200 nationalists not only from Slovakia but also from the Czech Republic and Hungary attended the protest rally. In a speech at the football stadium, Slovenská Pospolitosť leader Marián Kotleba said that the gathering should point at the inactivity of the current government of Robert Fico that is spending millions of euros on Roma but is not requiring them to respect the law in return.

The organisers’ failure to officially announce the rally to local authorities made the demonstration illegal and gave the police grounds to take action. The demonstrators originally planned a march through the village but the police forced them to remain at the football stadium.

The participants then refused to obey an order from the mayor of the village, Jozef Brendza, to disperse. Subsequently, the police detained Kotleba and another two leaders of the association. The crowd responded by throwing stones, glasses and bottles at the police officers who then used water cannons to disperse the participants, the Sme daily reported.

However, Kotleba claimed that neither he nor Slovenská Pospolitosť organised the rally and therefore they did not announce it in written form to the local authorities, adding that by dispersing the gathering the police violated the citizens’ right to assemble, wrote Sme.

The police said that Kotleba identified himself as the organiser of the gathering when he spoke to the crowd and invited other people to also speak. By doing so the police said he violated the law by not having a permit and the police detained him along with other 29 people. Two protesters and five police officers were injured during the intervention but none of the injuries required medical assistance.

Originally, the Roma Initiative of Slovakia had announced a response rally to the extremists but soon they cancelled their plans and suggested that Roma leave their homes in the village and its surroundings and visit more distant relatives on August 8.

Various Roma activists appealed to Slovak state officials and the European Union to condemn the recent activities of the right-wing, nationalistic organisations.

“A murder in neighbouring Hungary, where a woman – a mother and citizen – lost her life a few days ago, forces us to not be passive and wait to see what will happen,” reads the letter sent to Slovak state officials and the EU, as quoted by the TASR newswire.

The Roma groups said it is not enough to protest against extremists; it is necessary to take strong action against them.

“The fear, which we – Roma – feel when observing the situation in neighbouring Hungary, Italy and other countries of the European Union makes us fear for our lives and the lives of our children whom we send to schools, shops and the streets with fear – only because we are Roma,” reads part of the letter.

In what observers call a disturbing phenomenon, some citizens of Šarišské Michaľany expressed support for the extremists.

Political analyst Miroslav Kusý said that the atmosphere in Slovakia at the moment is favourable to spreading radical ideologies, adding that citizens are disturbed because they live next to dilapidated Roma settlements where there is almost total unemployment, and people living on the verge of hunger and committing crimes.

“The state is doing nothing about it, or it is doing too little – so little that people see it as insufficient and are seeking help elsewhere,” Kusý told The Slovak Spectator, adding that in such an atmosphere extremist groups offering offensive but easy solutions can quite easily find followers.

“Then there is the danger that the rabble will take into their own hands the solution of social problems that should be [down to] the state through political solutions and power structures,” Kusý explained. “If the state isn’t doing it at all or is doing it insufficiently, it gives a chance to extremist groups.”

Members of Slovenská Pospolitosť as well as some citizens of Šarišské Michaľany claimed that the police intervention was not proper.

“The police shouldn’t have intervened so harshly, those people [Pospolitosť sympathisers] weren’t doing anything wrong,” said a woman from Šarišské Michaľany quoted by SITA.

Residents of Šarišské Michaľany launched a petition on August 10 to dismiss Mayor Jozef Brendza for his decision to disperse the rally. Brendza rejected the petition drive and said that people should consider who has the right to issue orders to the police.

“I am neither the interior minister nor the prime minister,” Brendza told the TA3 news channel.

Renáta Martoňáková from the petition committee said they were aware the mayor cannot issue orders to the police, but she said that Brendza could have at least warned citizens that an incident like that could happen.

“When the police officers pushed part of the crowd into the residential area we were sitting there with our children and in the panic we couldn’t even run home,” she told the TASR newswire.

At the rally, Kotleba also criticised Ján Slota, chairman of the Slovak National Party (SNS), for what he called the party’s failure to sufficiently protect the Slovak nation and said that a new, more nationalist party should be created.

According to Kusý, such a party could be successful.

“Society is in crisis and groups living on the outskirts of society, such as the Roma, have to bear the worst consequences of the crisis,” he said. “The extremists see as the solution to the crisis the destruction of these groups, who they claim are making the life of the majority harder.”

If a newly-created party began to draw voters away from the more mainstream nationalist parties, such as SNS, those parties would then radicalise in order to keep voters, Kusý said.

In the wake of the protest rally the head of the Conservative Democrats of Slovakia (KDS), Vladimír Palko, suggested that statistics on crimes committed by Roma living in Slovakia should be processed and released on a regular basis, SITA wrote.

Palko also visited Šarišské Michaľany to show “that he is aware of the problem and that the problem needs to be solved”, the TASR newswire reported. He said he didn’t believe the inhabitants of the village were supporting extremist movements but their problem is that they are living in fear of Roma criminality and they need to see the police take action against this.

Alexander Patkoló, chairman of the Roma Initiative of Slovakia (RIS), condemned Palko’s suggestion of processing and releasing statistics on crimes committed by Roma. He said the law already gives police this option and “by these statements he [Palko] de facto gives a green light to these skinhead and fascist groups”, TASR reported.

Statistical record-keeping of the ethnicity of criminals is an excessive step, Kusý said, because it uses the same logic as the extremists: marking and persecuting those who are blamed for everything wrong, in this case the Roma.

“In order to weaken the extremists the ultra-conservative politicians would use the very methods the extremists themselves use,” Kusý said. “But those methods remain illegal and this does not represent an attempt to solve the problems through the use of law.”