MIROSLAV Ferkl, a real estate agent in the western Slovak village of Nový Život, has a complaint that is tiresomely common in this country – he is finding it difficult to get along with his Roma neighbours. 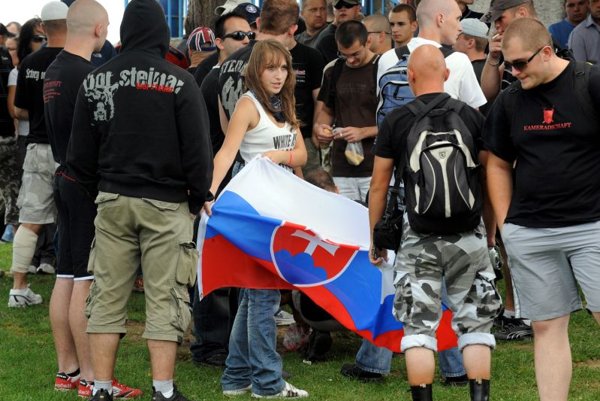 MIROSLAV Ferkl, a real estate agent in the western Slovak village of Nový Život, has a complaint that is tiresomely common in this country – he is finding it difficult to get along with his Roma neighbours.

Ferkl claims that the Roma families who live across the street from his bungalow litter, burn toxic waste, and on weekends stage a raucous open-air party that lasts all night. He has complained to the mayor and the police, to no avail.

“If the rules aren’t enforced, the result is chaos, and the municipality might as well not exist,” he says.

The principal target of his civic ire is Arpad Sarkozy, a Roma (gypsy) who a year ago opened a speakeasy, and who occasionally throws a party for other local Roma with music and dancing until the wee hours.

Last Saturday, for example, about 40 guests were in attendance, and a live band played until 06:00. Municipal rules in Slovakia call for quiet after 22:00.

“What am I supposed to do, tell everybody to leave as soon as the party gets going?” Sarkozy asks. “Besides, no white pubs or restaurants will let us in, so our young people have nowhere else to go.”

Slovakia, a country of 5.4 million, has one of the largest Roma populations in Europe, second only to Romania. Many of the estimated 380,000 gypsies who live here reside in ghettos or shantytowns, where unemployment is nearly universal, education non-existent, and disease a constant concern. The Roma also complain of widespread discrimination and racial attacks by extremists.

Combustible at the best of times, the relationship between the Roma and the white majority in Slovakia has recently flared into open hostility. On August 8, police in riot gear were called out to quell a rally by several hundred rock- and bottle-throwing neo-Nazi sympathisers protesting against what they termed a “Roma Terror” in Slovakia. The march, led by the far-right organisation Slovenská Pospolitosť, ended with over 30 arrests and seven injuries.

Unlike previous skinhead rallies, however, this one in the eastern Slovak settlement of Šarišské Michaľany drew several hundred sympathisers from the local population. The previous week, two Roma teens from a nearby shantytown had been arrested for assault. The victim, a 65-year-old caretaker of the local football stadium, lost an eye and suffered skull fractures in the attack.

Earlier this year, nine policemen in the eastern Slovak city of Košice were fired after the local press published video footage of them forcing young Roma boys in their custody to strip naked and slap each other. The boys had been arrested for allegedly robbing an elderly woman.

Such incidents have been linked to the presence of a nationalist political party, the Slovak National Party (SNS), in the government that came to power in 2006.

“There is little doubt that the more nationalist views coming out of the ruling coalition have emboldened other nationalist and extremist elements in society,” says Grigorij Mesežnikov, a political scientist and director of the Institute for Public Affairs think tank.

The SNS has also aggravated tensions between Slovakia and neighbouring Hungary. The party’s leader, Ján Slota, referred to Hungary’s then-foreign minister Kinga Göncz as “that woman with the dishevelled hair” and dismissed Hungarians as “parrots” and “Mongols”. A strict new language law introduced by the Slovak government has also infuriated Hungarians, who claim it infringes their right to speak in their native language. People who break the new rules on the use of Slovak in public can be fined €5,000, while Hungarian-language schools must do all their administrative work in Slovak. Hungarians make up 10 percent of the population in Slovakia and are the country’s largest minority.

Nevertheless it is the situation of Roma, who have no mother country to complain on their behalf to Brussels, that attracts the most concern. According to Klára Orgovánová, a former government appointee for Roma issues, the local support for the skinhead rally was as understandable as it was troubling.

“Crime committed by the Roma is a very serious matter and has to be solved,” she said. “I totally understand the viewpoint of the people in Šarišské Michaľany, who live near a Roma shantytown. From their point of view, the Roma create problems for them. But I also understand the Roma, who have been living in the same situation for years, and nothing has changed.”

That much is also true of the standoff in Nový Život, where the local mayor, Tibor Fehér, has been faulted for a lack of dynamism in his handling of ethnic conflicts. Even though Sarkozy’s speakeasy does not have the necessary permits, Fehér says shutting it down would leave the family without a source of income.

“Besides, no one has ever complained of the situation in writing and without a written complaint I can’t act.”

But Orgovánová believes that mediation is not enough. Until poverty among Roma is addressed, she says, tensions between Roma and non-Roma will continue, whether in the form of violent clashes or spats between neighbours.

“People often say to me, ‘if the Roma didn’t shout so much and didn’t steal vegetables from my garden, I would have nothing against them’. But this is a simplistic viewpoint – you can’t just tell them not to, and expect them to stop overnight. That’s just the way they do things. To change, they have to undergo a process, a big part of which is improving their economic situation.”