SkyEurope lives to fly another day

IT HAS been a bumpy ride over the past couple of months for SkyEurope Airlines, Slovakia’s low-cost airline. But after securing court protection from its creditors in June it has now found a new investor and a €5-million loan. The Austrian investment group Focus Equity’s decision to board the ailing airline instantly boosted confidence in SkyEurope, which meanwhile also managed to extend its commercial operating licence. 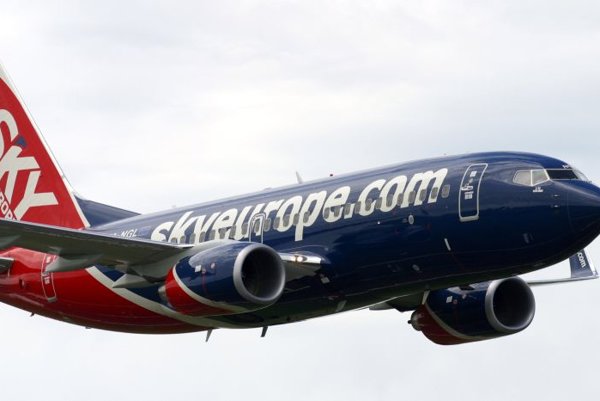 IT HAS been a bumpy ride over the past couple of months for SkyEurope Airlines, Slovakia’s low-cost airline. But after securing court protection from its creditors in June it has now found a new investor and a €5-million loan. The Austrian investment group Focus Equity’s decision to board the ailing airline instantly boosted confidence in SkyEurope, which meanwhile also managed to extend its commercial operating licence.

At midnight on August 14, however, Vienna Airport stopped servicing SkyEurope flights because of what the airport said were outstanding invoices. Earlier in the week, Vienna Airport had granted SkyEurope a grace period to settle its unpaid invoices.

“Despite long and intensive talks with SkyEurope, the outstanding due payments were not made by Friday, at 15:00,” Vienna Airport said in a statement, according to the Reuters newswire.

This served as the basis for the Vienna Airport to end all services for SkyEurope at the airport beginning at midnight on August 16.

SkyEurope announced that its jets will now depart from the Bratislava airport and that it will transfer all passengers from Vienna to Bratislava. The spokesman for SkyEurope, Tomáš Kika, described the arrangement as a temporary measure that will be applied only until an agreement is reached with Vienna Airport.

Back in June, a Bratislava district court granted SkyEurope Airlines temporary protection from its creditors. At the same time, the company’s planes encountered problems obtaining permission to leave some French, Bulgarian and Romanian airports amid reports of unpaid airport fees.

“Austrian investment group Focus Equity has signed an agreement to provide a new equity investment of up to €16.5 million in SkyEurope, conditional upon a number of factors including the successful completion of the financial reorganisation of SkyEurope Airlines, which has been underway since last month,” said SkyEurope in an official release.

The €5-million loan, agreed under a separate deal, comes from Chain Box Technology Ltd., which is registered in England and Wales. The airline said it intends to use the money to replenish internal cash-flow for operational capital before the investment deal is implemented, said the airline.

In return for its €16.5 million investment, the Austrian investor will get a package of shares.

SkyEurope has recorded losses since it was launched but observers say the airline has had an important role in the market.

“SkyEurope deserves to survive,” said Antonín Kazda, head of the Air Transport Department at the University of Žilina. “It is a company which has not been given a dime of support by the state while it has significantly supported the development of businesses in Slovakia. I hope that the company will succeed in being restructured and thus stabilised.”

The restructuring is taking place under the watch of the court which approved the process, said Kika. The aim is to enter negotiations with creditors after the formal acceptance of their claims and discuss ways of satisfying them, he added.

“SkyEurope is operating all its flights in line with the valid summer operational schedule, while the restructuring won’t have any direct impact on passengers,” Kika told The Slovak Spectator, adding that now the company is working on refining some of its services, such as paying refunds or handling complaints.

According to Kika, the restructuring should trim the debts of the company. SkyEurope does not plan to offer new destinations during the winter flight schedule, but “what it offers is a consolidated network”, Kika said.

Investments in air transport are a long-term prospect, however, and the question of when SkyEurope might make a profit still hangs in the air.

“We have been trying to achieve profits from the very beginning, and last year should have been a break-even year,” Kika said. “Unfortunately, the record high prices for oil and subsequently aviation fuel, as well as the global economic downturn, have thwarted these plans and affected not only airlines of our size but also much bigger players on the market.”

This is how SkyEurope, according to Kika, found itself in such an uncomfortable situation, in which the best solution was protection from creditors and restructuring.

“After all it was exactly this regime which later allowed many US companies to become successful and reach profit within a short period of time,” Kika added.

SkyEurope also completed the renewal of its fleet by signing a long-term leasing contract to operate two Boeing 737-300 aircraft. The airline will operate 32 routes to 24 destinations in 17 countries during the winter. This capacity will be leased from the Slovak company Air Slovakia and will be run wholly by SkyEurope air crews.

SkyEurope Holding CEO and financial director Nick Manoudakis said that SkyEurope was pleased to have signed the financing agreements so early in the company’s reorganisation.

“This shows that investors such as Focus see the potential in SkyEurope and recognise the opportunity of agreeing now to an investment in the company,” Manoudakis said.

However, one of SkyEurope’s planes remains stranded at Paris Orly Airport, following a ruling by a French court in Creteil on July 28.

Soon after SkyEurope was granted protection from its creditors by a Slovak court in June, Paris Orly Airport detained the plane because of what it said were unpaid take-off and landing fees.

“The Paris airport continues to hold our plane,” Kika told The Slovak Spectator. “We have taken all the necessary steps and I have information that some supportive diplomatic steps have been taken as well to have the plane released.”

Kazda of the University of Žilina said that the global economic crisis has affected the business quite heavily, as can be documented through figures from Bratislava Airport.

“When comparing the outputs for the first six months of 2009 with the same period last year, the airport has recorded a fall of about 25.5 percent,” he said.

As for how the latest low-cost airlines to enter the Slovak market, Danube Wings and Wizzair, might change things, Kazda said that Danube Wings is competing by providing short and very short-haul flights, something which had previously been missing.

“Especially, the opening of routes to another airport, Poprad Tatry, as offered by this company should be appreciated, since other airlines have not yet had the courage to do it,” Kazda told The Slovak Spectator.

According to Kazda, the current schedule offered by Wizzair is still very limited and it is difficult to foresee that with the global fall in the market, the approaching winter season and the stabilisation of SkyEurope the airline will in fact widen its offer. Considering the number of destinations it offers compared to the dominant player, Ryanair, and second-place SkyEurope, Wizzair services have so far been negligible.

“The air transportation market in Slovakia will doubtless grow,” said Kazda. “When compared to Poland, considering its number of inhabitants and also the Poles who work and live abroad, the local market lacks size, while compared to Austria it lacks a wealthy middle-class.”

The propensity to fly per year depends on GDP in each country, according to Kazda.

“When we grow richer, we will fly more,” said Kazda.

As for the services that are still lacking in Slovakia, Kazda said that Slovakia does not have a traditional full-service carrier, which could cover the needs of mainly business passengers.

“The interlinking of Slovakia with a significant European hub is also lacking; this would allow passengers to fly to all destinations,” Kazda said.