THE PRESIDENT’S recent decision to veto a revision to the waste law has pleased producers and importers, who said they were afraid that the new legislation would increase the prices of their products, but has left towns and villages disappointed – and with a hole in their waste budgets. 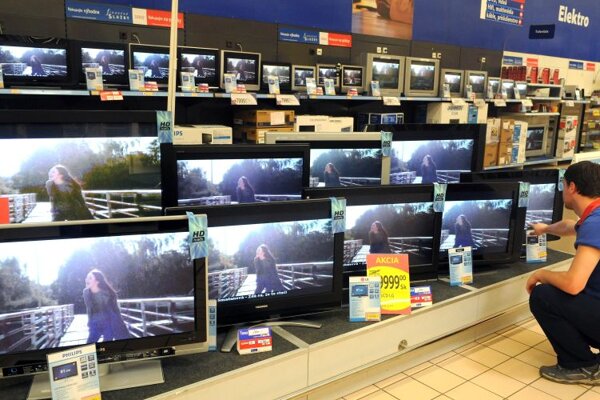 One day all these screens will be waste. (Source: TASR)
Font size:A-|A+0

THE PRESIDENT’S recent decision to veto a revision to the waste law has pleased producers and importers, who said they were afraid that the new legislation would increase the prices of their products, but has left towns and villages disappointed – and with a hole in their waste budgets.

President Ivan Gašparovič vetoed the revision to the waste law on July 31. He agreed with objections raised by businesspeople who had argued that the new legislation would negatively affect the Slovak business sector, which has already been hit by the global economic downturn.

“I consider the potential impacts … of the approved law during the times of the global crisis to be risky and therefore unacceptable in terms of its negative impact on the social situation of Slovakia’s residents,” the Slovak president said, as quoted by the ČTK newswire.

The Slovak Parliament adopted the revision, which would harmonise Slovakia’s waste legislation with EU law, on June 30. It also set terms for cross-border transport of waste and introduced a duty for importers and producers of electrical appliances to pay a contribution to the Recycling Fund for each product launched on the market, the Pravda daily wrote.

According to the Recycling Fund, the revision would redirect all recycling fees into its coffers. It would then use it to support waste budgets of towns and willages.

Gašparovič remarked that the extension of the range of producers and importers obliged to pay in to the Recycling Fund, which was the most-criticised feature of the revision, was not the goal of the cabinet-prepared revision. It was later incorporated into the legislation during the adoption process in parliament, the TASR newswire reported.

Parliament will deal with the revision again in September, when at least 76 members of the 150-seat assembly will have to vote in its favour in order to make it effective.

The Recycling Fund along with the Association of Towns and Villages (ZMOS) were keen to see the legislation approved by parliament while associations representing industrial producers and sellers said they feared its impact on businesses and citizens already hit by the economic crisis.

The fund sees it as an instrument to support the collection, separation and processing of waste for reuse. After the presidential veto the fund expressed its regret.

“Lobbying by organisations which are not willing to participate in helping to pay for the handling of waste which they themselves helped create was successful,” Ján Líška, the director of the Recycling Fund told The Slovak Spectator. “Intimidation of the public by lies that food prices would go up by 10 percent or that the prices of electrical appliances would increase from €50 to €100 per item was effective.”

Líška maintains that there was no reason for any such drastic price increases.

“On the contrary, the revision to the waste law would bring in an orderly and fair allocation of recycling fees collected from citizens,” said Líška. “It would make the whole system more effective and later also lead to a drop in recycling fees.”

The Slovakia Association of Towns and Villages (ZMOS), which represents local municipal authorities, said it too did not expect higher prices to result from the revision.

Kováč is afraid that if the waste law reverts to its original wording, the only legal way to raise money to compensate villages and towns for losses they suffer when separating and recycling obligatory components of waste will be to increase waste collection fees.

“This would mean a real burden on citizens,” said Kováč, adding that there is no need for citizens to pay increased waste collection fees when they have already supported waste separation and recycling by paying recycling fees as part of a product’s price.

Kováč believes that if parliament re-adopts the vetoed revision, the fees collected would be concentrated in the Recycling Fund, which would mean 100-percent certainty that all of them would be used only for purposes linked to recycling.

Associations and groupings of producers and importers of electrical appliances estimate that the revision would increase the prices of all appliances by as much as 20 percent.

“The ruling coalition deputies, by adopting this revision, have encouraged Slovaks to travel massively – and to an even greater extent – abroad to shop,” the associations wrote in their joint stance after the parliament adopted the revision in late June. “Producers and importers regard this revision as a fundamental violation of cooperation memorandums agreed on to address the impact of the financial and economic crisis, signed between in March 2009 between the government and employers represented by AZZZ, The Republic Association of Employers and Club 500.”

The Republic Association of the Employers (RÚZ) welcomed the presidential veto.

“Employers regard not only the veto itself but also the arguments of President Gašparovič for taking this step as acknowledgement of the expert arguments made against adoption of this revision,” RÚZ writes on its website.

RÚZ said it regards the way in which amendments by some members of parliaments to the draft revision were adopted as having negated the purpose of the dialogue between the government and social partners, and as bringing chaos and uncertainty into the legislative process.

“Not only were they [amendments to the draft revision] not discussed with the parties involved, but the impacts and consequences of the amendments submitted were not analysed at all,” writes the RÚZ.

Employers admit that the current legislation is not ideal and needs improvement.

“A revision to the waste law is needed because it is necessary to introduce order into the collection system for recycling fees,” Roman Karlubík, the vice-president of the Association of Employer Unions of Slovakia (AZZZ), told The Slovak Spectator. “People already pay recycling fees as part of the prices of products, but in the end part of these is not used [to pay for] the collection, separation and recycling of the waste.”

According to Karlubík, many crooked business entities “help themselves” with what he called “virtual certificates” for delivery of separated waste for further processing. He estimates that at least 6,000 such entities prey on the 2,000 businesses which actually meet their obligations.

“On the other hand, an increase in fees during the current crisis situation is unacceptable for producers and thus AZZZ has not taken an unambiguous attitude to this revision,” said Karlubík.

The non-governmental environmental organisation Friends of the Earth also sees the system of recycling fees as ripe for change.

“It is a question of what changes should be done and how to push them through,” Branislav Moňok of Slovakia’s Friends of the Earth told The Slovak Spectator. “This requires more willingness to inform and discuss on the part of all involved. This way disinformation, lies and useless animosity will be avoided.”