SKYEUROPE’S blue-liveried jets were grounded on August 31, leaving hundreds of the budget airline’s passengers seeking alternative ways to reach their destinations. The jets will be going nowhere soon: after seven years on the market, the Slovakia-based low-cost carrier declared bankruptcy on August 31, shortly before midnight. The company immediately suspended its sales and operations and apologised to all passengers for the inconvenience in an official release. 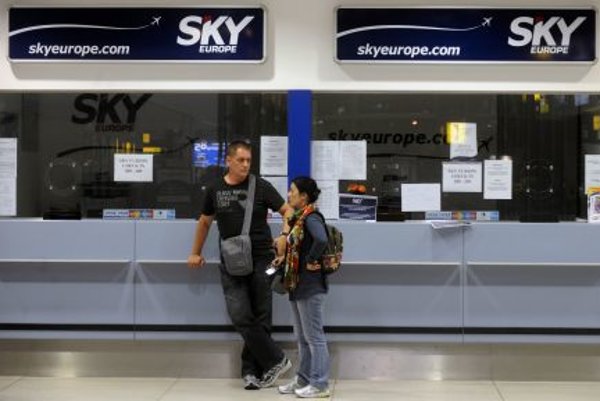 SKYEUROPE’S blue-liveried jets were grounded on August 31, leaving hundreds of the budget airline’s passengers seeking alternative ways to reach their destinations. The jets will be going nowhere soon: after seven years on the market, the Slovakia-based low-cost carrier declared bankruptcy on August 31, shortly before midnight. The company immediately suspended its sales and operations and apologised to all passengers for the inconvenience in an official release.

Earlier in the day, SkyEurope had cancelled 12 flights bound for a variety of destinations from Bratislava and Prague Ruzyne Airports; it then announced the suspension of all flights as of September 1 because of unpaid bills.

Meanwhile, Slovakia’s Economy Ministry revoked the airline’s operating licence on September 2 as a consequence of its bankruptcy.

Information about SkyEurope’s bankruptcy first appeared on the website of the Vienna stock exchange.

Shortly afterwards, SkyEurope said that the move by the restructuring trustee came after recent actions by suppliers, a drop in the number of passengers and because of ongoing operational expenses.

However, SkyEurope CEO Nick Manoudakis told the Czech daily Mladá Fronta Dnes that he was in negotiations with potential investors about starting a new airline, which would keep the SkyEurope brand name.

“Those who are losing out from the crash of the airline are the Slovak customers because they will see choice and competition decrease,” Antonín Kazda, head of the Air Transport Department at the University of Žilina told The Slovak Spectator. “Within a minimum of one year the most-affected party will be Bratislava Airport, which will see the cumulative effect of an overall drop in air transportation as a consequence of the financial crisis and the crash of SkyEurope.”

According to Kazda, in the long term it is positive that the airport is building new capacity to handle passengers which might attract other carriers into the Slovak market.

Passengers who purchased flights by credit card were advised to turn to their credit card issuer to seek a refund, a notice on the SkyEurope website announced. However, for those who had paid directly to SkyEurope by bank transfer or cash a refund might not be possible, SkyEurope said in its release.

Meanwhile Wizz Air, the largest low-cost airline in central and eastern Europe announced that it would provide re-routing alternatives to passengers affected by the suspension of SkyEurope’s operations at Prague airport.

“This was certainly to be expected,” John Stephenson, executive vice-president of Wizz Air, said in an official release. “The event underlines the critical importance of strong cost control and a strong liquidity position, especially in times of financial crisis.”

Wizz Air has already announced the expansion of its regular flights from Prague in response to SkyEurope’s demise. As of June 2010, the airline plans to add an additional jet to the two it has based in Prague.

Meanwhile, Prague Airport has confirmed it is in negotiations with Wizz Air.

The airline offered a special €30 all-inclusive one-way fare to passengers who hold a valid SkyEurope booking for travel between 1 September 2009 and 26 March 2010.

CSA Czech Airlines also offered to help convey passengers who had purchased tickets with SkyEurope for a flat fee of €50, and on September 1 about 200 SkyEurope passengers flew with the Czech airline, according to SITA.

Danube Wings announced on September 2 that it too was ready to dispatch special flights to Italy, France and Great Britain to transport groups of people who had been stranded in those countries.

Danube Wings has been operating flights between Bratislava and Kosice since March 2009. It competed on the route with SkyEurope.

Analysts see Ryanair and Wizz Air as the airlines with greatest chance of picking up former SkyEurope passengers.

“It is possible that some of the profitable connections of SkyEurope will be taken over by a competitor, be it Ryanair or WizzAir” Antonín Kazda told The Slovak Spectator. “However, one cannot expect them to take over the whole network – and considering the current economic crisis they do not need to rush.”

The ideal situation would be if some of the low-cost airlines were to open a base in Bratislava, said Kazda.

SkyEurope’s final descent was turbulent. Just as it was securing court protection from its creditors in June, its planes encountered problems obtaining permission to leave some French, Bulgarian and Romanian airports amid reports of unpaid airport fees.

The company then announced that it had found a new investor and a €5-million loan. The Austrian investment group Focus Equity’s decision to board the ailing airline instantly boosted confidence in SkyEurope, which also managed to extend its commercial operating licence.

At midnight on August 14, however, Vienna Airport stopped servicing SkyEurope flights because of what the airport said were outstanding invoices. Earlier that week, Vienna Airport had granted SkyEurope a grace period to settle its debts.

Kazda said that SkyEurope, as the first low-cost airline in the eastern European market, had to face and resolve a number of completely new issues.

Kazda said he believed that SkyEurope management’s decision on pursue less profitable lines may also have contributed to its collapse, although the last fatal blows were probably last year’s high fuel prices and the decline in ticket sales in 2009 as a consequence of the global economic downturn.

“The majority of European companies are facing similar problems, but for the problems of some are being solved with contributions from the state,” said Kazda.

As for the role SkyEurope played in the Slovak market, Kazda said that SkyEurope has confirmed the existence of low-cost air carriers in Eastern Europe.

“It was the only company which managed, without the assistance of the state, to boost the airport [in Bratislava] – and from approximately 500,000 passengers in 2004 increased the number to 2 million in three years,” said Kazda, adding that other airlines merely followed SkyEurope. “My opinion is that without SkyEurope Bratislava Airport would have about 600,000-700,000 passengers [per year].”