THE OPEN-AIR museum of folk architecture in Bardejovské Kúpele has undergone its most extensive reconstruction in the 44-year history of the complex, including an extensive restoration of its buildings and terrain. 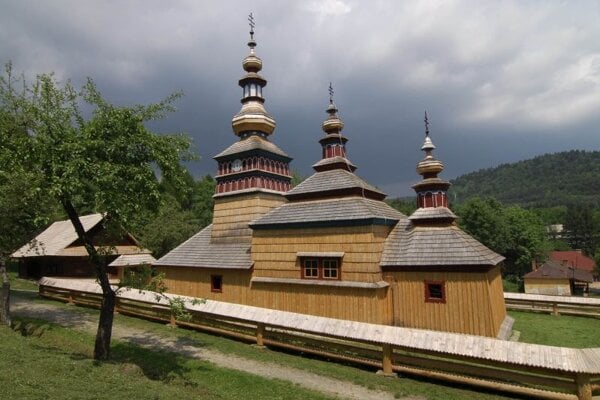 The Church of the Protection of Holiest Madonna from Mikulášová, originally built in 1730, was moved and reconstructed at the open-air museum in Bardejovské Kúpele. (Source: TASR)
Font size:A-|A+  Comments disabled

THE OPEN-AIR museum of folk architecture in Bardejovské Kúpele has undergone its most extensive reconstruction in the 44-year history of the complex, including an extensive restoration of its buildings and terrain.

The oldest building, dating back to 1700, is a bell tower from Jánovce that, along with an old farmer’s house from Bardejov, arrived as part of the reconstruction. New power lines, renewed pathways and new toilets have also been completed as part of the renovation.

The museum is part of the Šariš Museum in Bardejov and its founder and administrator is the Prešov Region (PSK), which has invested more than €780,000 over the last two years. PSK drew a loan of €668,393 from the European Investment Bank and the rest of the reconstruction costs were financed from the region’s own resources. Another large investment which PSK started this spring is moving a rich farmer’s house from Richvald to the museum’s premises. Thus far, €49,975 has been spent on this project and the total cost will be €102,900.

Significant investments in the Bardejov open-air museum are justified, said the head of PSK, Peter Chudík, calling the museum an architectonic jewel, a showcase of the region’s culture and a good draw for tourism. He added its advantage is that people can view a comprehensive history of north-eastern Slovakia and that the open-air museum is alive – with liturgies of both Greek Orthodox and Greek Catholic religions taking place at the site all year round.

The open-air museum at Bardejovské Kúpele was officially opened on May 1, 1965 as the first of its kind in Slovakia. Its beginnings go back even further: the wooden church from Mikulášová was first moved next to the spa’s tennis courts in the 1930s and later to its current site in the open-air museum.

“Thanks to this restoration, we moved three buildings that have enriched the museum. The rarest architectonic jewel is the bell tower from Jánovce, our oldest building. The small church from Zboj came from furthest away – from the Ukrainian border,” the director of the Šariš Museum, František Gutek, told SITA.