THE PUBLIC is unlikely to see Stanislav Becík roaming through rural Slovakia on a horse-drawn carriage to inspire pride in farmers during crisis-hit times again- at least, not as agriculture minister. Vladimír Mečiar, boss of the Movement for a Democratic Slovakia (HZDS) party has asked Becík to quit and has even revealed his new candidate for the ministerial post. He will be the fourth agriculture minister since 2006. 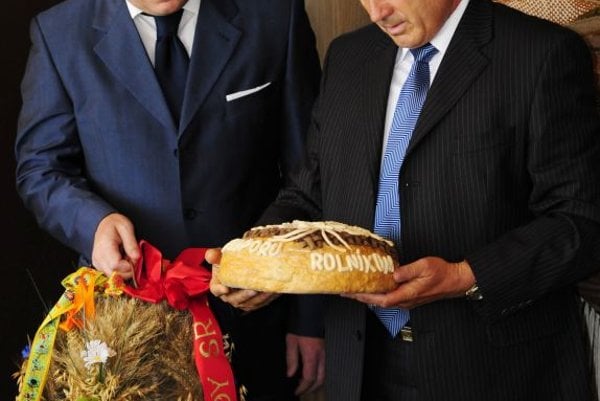 THE PUBLIC is unlikely to see Stanislav Becík roaming through rural Slovakia on a horse-drawn carriage to inspire pride in farmers during crisis-hit times again- at least, not as agriculture minister. Vladimír Mečiar, boss of the Movement for a Democratic Slovakia (HZDS) party has asked Becík to quit and has even revealed his new candidate for the ministerial post. He will be the fourth agriculture minister since 2006.

In the midst of media speculations that HZDS wants Becík out for failure to manage the ministry along Mečiar’s party line and party interests, the head of HZDS has failed to clearly spell out why he wants Becík recalled. Prime Minister Robert Fico said he was happy with Becík’s performance and has described the HZDS nominee as a “good minister”.

The head of the Slovak Agriculture and Food Chamber, Vladimír Chovan, is Mečiar’s choice as minister number four, according to media reports.

Becík admitted on August 26 that he is not entirely clear about Mečiar’s reasons for demanding his dismissal, but he said that the mandate belongs to HZDS and he would return it without much fuss. Becík remained in post as The Slovak Spectator went to press .

“The party lent it [the mandate] to me so that I could run the ministry for an unspecified period of time and if the party decides that it will hand over the mandate to somebody else it's my duty not to cause any trouble,” said Becík, as quoted by the TASR newswire.

Fico stood up in defence of Becík and said that he is a good minister who understands agriculture and enjoys a good reputation among farmers.

According to media reports, in a massive management reshuffle at the state-run forestry company Lesy SR, Becík appointed people close to Fico’s Smer party to senior positions rather than people from HZDS. Fico stated that Becík can defend the choices he made, regardless of whether the appointed people claimed leftist or more conservative political values.

“Mečiar wants to show that he has at least some remnants of his powers and that he still can use them,” Kusý told The Slovak Spectator. “The point, most probably, is that the minister has not been firm enough in defending the interests of the HZDS, while rather preferring the interests of Smer.”

Mesežnikov suggested that the nominations are important for Mečiar because he needs to saturate government posts with his people.

“I recently read that Becík has not pushed up the popularity of HZDS enough,” Mesežnikov told The Slovak Spectator. “The expectation that the agriculture minister should push up voter preferences for a party which derives its popularity mostly from its leader and not from Becík, who in fact had been an unknown person, does not seem justified enough to me.”

Mesežnikov also suggested that this claim does not quite meet muster since the election preferences for HZDS have moved up slightly during Becík’s ministerial term, though he does not assume that it happened necessarily because of the agriculture minister.

However, Mesežnikov said that the ruling coalition faces a more complex problem, which is a lack of readiness to govern with stable personnel along with a lack of experts with unquestionable qualifications.

“People whose professionalism and competence evoke certain doubts are then making it into these positions,” said Mesežnikov. “This is not exactly the case with Becík who, perhaps, was more positive than his predecessors or other ministers.”

According to Mesežnikov, frequent reshuffling of ministers means that even less-prepared and less-competent people are making it to these posts. “As far as HZDS is concerned, I think it is a party without any considerable prospect of professional potential,” said Mesežnikov. “The Slovak National Party is even more problematic in this sense because its nominees, the way they are sought out, and their subsequent poor performance is something Slovakia has not experienced since the 1990s.”

Kusý said that the overall relationship between Smer and HZDS should not be affected by the developments around Becík.

Speculation about the possible dismissal of Becík has been circulating for some time while the HZDS boss and his party colleagues have remained somewhat tight-lipped about the ministerial future of Becík, who was recently in the spotlight as he travelled around Slovakia in a horse-drawn carriage as well as for penning a poem about and for farmers.

“The seat did not grow onto my ass,” SITA quoted Becík as saying at the government’s session on August 19. “When D-day comes, because the seat belongs to the party and a better candidate comes, I will obviously raise my hand for him and will support him too.”

Becík replaced Zdenka Kramplová in August 2008. Her dismissal was also arranged by Mečiar. Complications around the HZDS’s annual report on party financing and alleged non-transparent public tenders at the ministry under her watch were the reasons why Kramplová’s ministerial career was cut short, according to media reports.

Miroslav Jureňa, her predecessor, was sacked by Prime Minister Fico after a questionable deal involving the selling of land plots covering more than one million square metres. The land, situated in the lucrative High Tatras, was said to be worth about Sk1.5 billion (about €45.4 million) but the plots were sold for Sk13 million to GVM, a company said to be close to Mečiar.