‘A MINI gas crisis’, ‘an artificial problem’, ‘lobbying on behalf of a smuggling gang’, and ‘a radiation threat’ are among the various explanations or descriptions put forward by different sources for the recent spat between Slovakia and Ukraine over the operation of a scanner at the Maťovce railway border check. 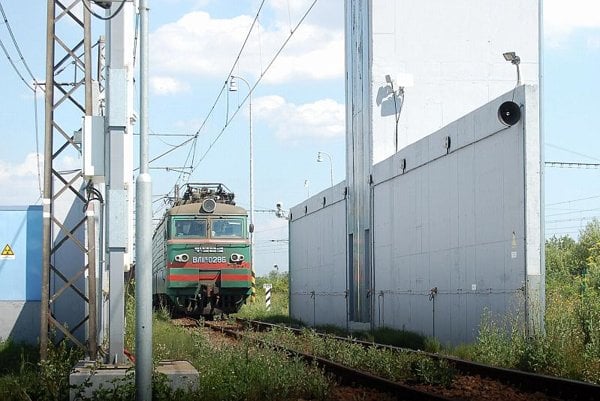 At the core of the dispute is this scanner, at the border railway crossing in Maťovce. (Source: SME)
Font size:A-|A+  Comments disabled

‘A MINI gas crisis’, ‘an artificial problem’, ‘lobbying on behalf of a smuggling gang’, and ‘a radiation threat’ are among the various explanations or descriptions put forward by different sources for the recent spat between Slovakia and Ukraine over the operation of a scanner at the Maťovce railway border check.

On August 18, Ukraine unilaterally halted cross-border railway cargo movements because of what it called the harmful effect of the scanner, which is operated by the Slovak customs authority and uses X-ray technology, on the health of employees of the Ukrainian state railway.

Slovakia called the claims unfounded and said that the device is harmless to the employees’ health. Nevertheless, the following day it agreed to turn it off, given the prospect of financial losses for Slovak businesses which are dependent on supplies of coal, iron ore and chemical products transported by rail from Ukraine.

Ukraine resumed cargo shipments once the device was turned off.

“We will strive to continue the mutual dialogue with Ukraine and find optimal solutions so that political and economic damage is prevented while at the same time Slovakia keeps its obligations stemming from membership in the Schengen zone,” Foreign Affairs Ministry spokesman Peter Stano told The Slovak Spectator.

According to Stano, Slovakia has not yet turned to European institutions over the dispute with Ukraine.

Economy Minister Ľubomír Jahnátek said on August 26 that the situation at the Uzhgorod-Maťovce border crossing is an artificially fabricated problem, the SITA newswire reported. The Slovak cabinet included the scanner spat on its agenda.

Slovakia should hold talks with Ukraine by the end of August to unify methods of measuring radiation emitted by the scanner and demonstrating its safety.

The equipment should then be assessed by an internationally recognised body whose conclusions would be binding for both Ukraine and Slovakia.

Until then, the customs authority will carry out checks without using the scanner.

Jahnátek also described the situation as another obstruction by Ukraine. Earlier in 2009, Slovakia’s economy was brought to an almost complete halt when Russia turned off gas supplies to central Europe over a dispute with Ukraine over gas prices and unpaid bills.

However, Ukraine’s ambassador to Slovakia, Inna Ohnivets, maintains that the amount of radiation produced by the scanning device is harmful, and has led to a deterioration in the health of four Ukrainian workers.

“It's really not true what has been published in the media, namely that the level of radiation isn’t harmful,” Ohnivets said, as quoted by newswire TASR. “We have documents which dispute such data.”

Slovakia’s rail freight company, ZSSK Cargo Slovakia, said it had offered to allow Slovak staff and locomotives to operate trains on the stretch on which engines and railcars are scanned, but that Ukraine did not respond.

“The truth is that this was discussed in early August, with no results,” said Ohnivets.

On August 26, Prime Minister Robert Fico said that the government is making sure that all the goods the Slovak economy needs are imported to Slovakia. Fico also stressed that Slovakia is aware that it is located on territory which guarantees the Schengen border.

“It [the dispute] will be resolved to the satisfaction of all in the EU,” Fico told SITA.

U.S. Steel Košice and power producer Slovenské Elektrárne were among the companies that were most affected by the interrupted supplies of coal, iron ore and chemical products, according to the Sme daily.

The local media has speculated that mafia organisations involved in smuggling are behind the action of the Ukrainian railway company, because the scanning device can detect attempts to smuggle goods like cigarettes, alcohol and other products across the border.

According to Jahnátek, the intensity of radiation during one scan is equivalent to the dose received by a passenger aboard an aeroplane during 14 minutes of flight at a normal cruising altitude of 10,000 metres, SITA wrote.

A Ukrainian engine driver would be exposed to a harmful dose of radiation only if he passed through the scanner 400,000 times a year. Even according to Ukrainian calculations, engine drivers would still have to pass through 120,000 times a year in order to receive a harmful dose, which the minister said was why he considered the objections of Ukraine to the scanner as being absurd.

“It is a fabricated problem, which is probably related to something fully different from health protection,” he said.