IN THE middle of July, the Moravian town of Uherské Hradiště in the Czech Republic hosted the jubilee tenth year of its International Symposium of Medals, Plaques and Small Carvings. 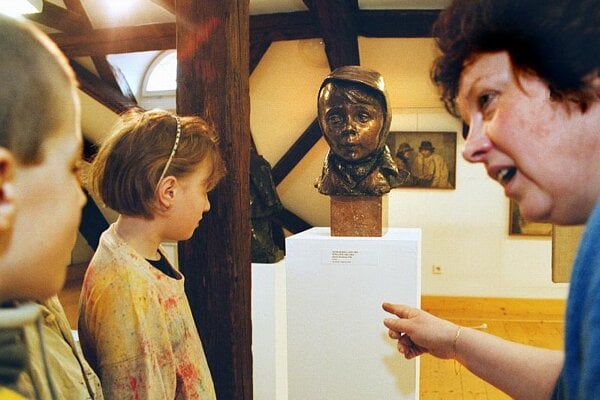 A bronze of the Czech actor Josef Abrhám by Jan Habarta, entitled Whistling Boy, is the most famous exhibit of the Slovácko Museum in Uherské Hradiště. (Source: ČTK)
Font size:A-|A+

IN THE middle of July, the Moravian town of Uherské Hradiště in the Czech Republic hosted the jubilee tenth year of its International Symposium of Medals, Plaques and Small Carvings.

This event is unique in the Czech Republic and has a long history. About 20 artists from previous years, and from all Visegrad Group countries, travelled to the site, a school of applied arts, the ČTK newswire was told by Ivo Frolec, the head of the Slovácko Museum in Uherské Hradiště.

The symposium has taken place in Uherské Hradiště since 1988, usually every second year. Its main aim is to support and promote the development of the medal-minting art, which has fallen somewhat into neglect, making and fostering contacts in the sphere.

The symposium lasted for one month. Artists used ancient techniques: for instance, lost-wax casting, the process by which a bronze or brass is cast from an artist's sculpture; the technique is still used in industrial applications where it is called investment casting.

Milada Frolcová, one of the organisers, told the ČTK newswire that she finds it better not to give a specific theme to the artists, so that they are not limited by it and feel freer. This year has brought together some of the artists from previous years, e.g. Milada Othová.

One or two works from every participant were chosen for the symposium’s collection. Since August 15, an exhibition of the results of the current symposium has been on show at the Gallery of the Slovácko Museum.

The whole symposium collection is also to be presented; it currently comprises more than 150 artefacts and it is the most extensive collection of its kind in the whole Czech Republic, and one of the biggest in Europe.
The piece is part of the Visegrad Countries Special, prepared by The Slovak Spectator with the support of the International Visegrad Fund. For more information on cooperation between the Czech Republic, Hungary, Poland and Slovakia please see the following document.