MAKING long distance relationships work can be a difficult task. Now imagine there are four participants instead of just two and each hails from a different country. The Visegrad Cello Quartet, a Slovak-Czech-Polish-Hungarian ensemble of cellists has shown that such a relationship can work. The quartet regularly sells out wherever they perform at concert halls around central Europe. 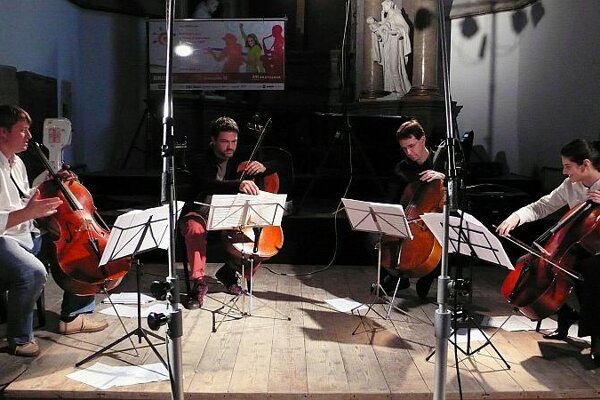 MAKING long distance relationships work can be a difficult task. Now imagine there are four participants instead of just two and each hails from a different country. The Visegrad Cello Quartet, a Slovak-Czech-Polish-Hungarian ensemble of cellists has shown that such a relationship can work. The quartet regularly sells out wherever they perform at concert halls around central Europe.

All they needed to get started was love, enthusiasm and perhaps a good matchmaker, for behind the Visegrad Cello Quartet lies an éminence grise par excellence: diplomat Ľubica Krénová, Slovakia’s ex-cultural attaché and director of the Slovak Institute in Prague. Krénová came up with the idea of putting the four musicians together in 2005.

“At the beginning, it was only a sort of brainwave, a thought without clear intention,” said Krénová, whose primary occupations are in drama criticism and journalism. By discovering the world of classical music, the author of several important monographs on the theatre, wanted to “expand her own limits”.

As a diplomatic representative, she had met two men who are among the most renowned musicians of both the local and the international contemporary music scene, Slovak cellist Jozef Lupták and his Czech colleague Jiří Bárta.

“At first I was afraid to reveal my vision to them, which by that time had become clearer and included a conception of the ensemble’s first appearance,” Krénová told The Slovak Spectator. “I was afraid they would consider me naive.”

But when she unfolded the plan, both were pleased and the preparations for the Visegrad Cello Quartet’s premiere began.

“I will always keep a wonderful memory of the first Prague concert,” said the ex-attachée.


She added that it was not only because she had seen her wish come true, but also for a more personal reason: the premiere was held on the anniversary of her mother’s death. Krénová dedicated the project to her mother.

“The music, St. George’s Basilica at Prague Castle, and the memory of my mom – it was simply overwhelming,” she said.

Since then, the quartet has performed at various festivals and prominent cultural events such as the Convergences chamber music festival in Bratislava and Les Invalides in Paris, invariably with great success both artistically and at the box office.

Krénová says the ensemble owes its success to no one but themselves. “Each of them,” she says, “is a first-class virtuoso.”

At the beginning, the quartet was to be an all-male team. The Polish cellist, however, had to leave the group because of health problems. He was replaced by a young woman, Aleksandra Ohar. Hungarian Tamás Mérei is the other member. From time to time Tamás Varga, another talented cellist, fills in for Mérei.

Since the beginnings, the quartet has stuck with its original goal to familiarise local audiences with contemporary classical music in V4 countries.

Several renowned composers have written scores especially for the ensemble, among them, Slovak musician and composer Marián Varga, former member of the Collegium Musicum Orchestra. His Hymn for 4 Celli premiered at the opening ceremony of the Central European University in Skalica.

Lupták, an alumnus of the London Royal Academy of Music and founder and director of the aforementioned Convergences festival, told The Slovak Spectator that the Visegrad Cello Quartet experience is enriching not just for its fans, but also for the musicians themselves.

“Our meetings are always extremely inspiring,” he said. “Because we all live in different countries and face different realities, our music enables us to confront our experience and enlarge our horizons. Besides that, as we play we listen to one another playing. Every time, we discover a fresh, new piece of music.”

For each concert, in fact, all cellists are expected to bring scores unknown to the others. These are then performed solo, in addition to one composition played by the whole ensemble.

Lupták said that in spite of the time demands given the artists’ busy schedules, the rehearsals offer them a priceless human experience, enhanced by the character of the instrument.

“Among all string instruments, cello is by its diapason closest to the human voice,” Lupták explained. “This quality gives it really a human dimension. This is one of the reasons why I chose the cello years ago and why it has become my preferred form of expression.”